Ahead of the 2019 Africa Cup of Nations RedArmyBet brings you betting tips and previews as the tournament kicks off this week. 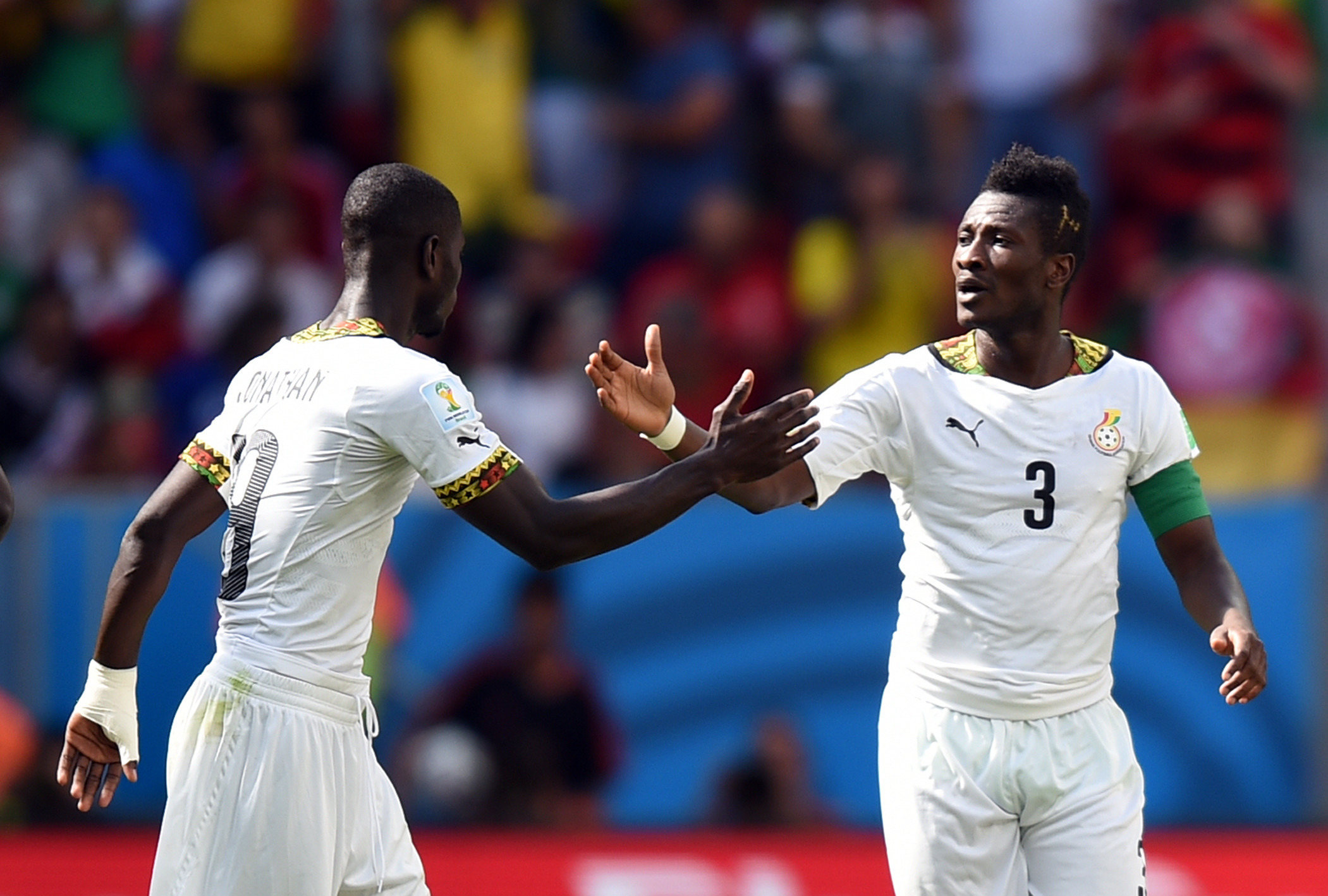 Asamoah Gyan (R) of Ghana celebrates with team mate Jonathan Mensah (L) after scoring the 1-1 goal during the FIFA World Cup 2014 group G preliminary round match between Portugal and Ghana at the Estadio National Stadium in Brasilia, Brazil, on 26 June 2014. Photo: Marius Becker/dpa (RESTRICTIONS APPLY: Editorial Use Only, not used in association with any commercial entity - Images must not be used in any form of alert service or push service of any kind including via mobile alert services, downloads to mobile devices or MMS messaging - Images must appear as still images and must not emulate match action video footage - No alteration is made to, and no text or image is superimposed over, any published image which: (a) intentionally obscures or removes a sponsor identification image; or (b) adds or overlays the commercial identification of any third party which is not officially associated with the FIFA World Cup) EDITORIAL USE ONLY

This will be the first Africa Cup of Nations held in the summer with an expanded 24-team format, with the previous 11 editions of the tournament since 1998 featuring 16 competitors (with the exception in 2010 where Togo pulled out, while in 1996 there would have been 16 had Nigeria not done the same).

However, it’s unlikely to make a huge difference with the extra weaker teams that have qualified not realistically in the running to lift the trophy, though those with older squads or less depth may find the additional knockout game en route to the silverware in the heat of the Egyptian summer a slight challenge – spelling trouble for Morocco.

Egypt sensationally won three titles in a row in 2006, 2008 and 2010, but reaching successive finals is a tough as and in the four editions since then, seven different teams have reached the showpiece event with only the Ivory Coast making more than one appearance.

In fact, although the tournament is typically held every two years (and so you wouldn’t have thought teams change dramatically over such a short period), Nigeria failed to make the 2015 edition having lifted the trophy in 2013, while 2015 champions Ivory Coast crashed out at the group stages last time in 2017 as they failed to win a single game.

Favourites Egypt have home advantage and serious pedigree in this tournament, while they have a strong spine to the team, though they’ll need to sort out their defence to go all the way.

Javier Aguirre’s men have bagged 20 goals in their last eight matches as they’ve put in some exhilarating attacking displays, but they only kept three clean sheets across these as they even conceded against Eswatini (formally known as Swaziland).

They were previously a hard-working team that looked to Salah for moments of inspiration on the break, but the new attacking approach probably doesn’t suit their talents as well as the old regime did.

We’d expect them to reach the latter stages, but though they possess some real quality throughout the team, their style of play may be a little naive in the final stages of tournament football and the pressure as hosts could become stifling.

Further, while being the host nation has been a distinct historical advantage, producing 11 of the past 30 winners, the last six editions of the Africa Cup of Nations has been lifted by a visiting team.

Senegal have never won the Africa Cup of Nations, but this could be their year. 13 of their 23-man squad is nicely nestled in the prime age bracket between 27 and 29, while a further six players are between 24 and 26.

Both the youth and depth are there to handle the expanded format in hot conditions, and while Mo Salah is treated as something akin to a deity for hosts Egypt, his club teammate and Senegal talisman Sadio Mane has arguably enjoyed the better campaign.

He’s by no means their only attacking outlet however, and the Lions of Teranga head into the tournament on the back of six consecutive victories with five accompanying clean sheets, with their defence marshalled by Napoli’s outstanding centre-back Kalidou Koulibaly.

Senegal face stiff competition in their group from main rivals Algeria, who can boast their own star man in Riyad Mahrez, but the Desert Warriors have struggled with ill-discipline in the past and have only made the final four once since they last lifted the trophy in 1990, with that fourth-place finish coming in 2010.

They certainly have the talent, but this is a team that have flattered to deceive before and after an unconvincing qualification campaign, there are better alternatives to back.

Ivory Coast have struggled with the retirement of key players such as Didier Drogba and Yaya Toure in recent times, though they should better their group stage exit from last time with some exciting young talent at their disposal. They will however be better going forwards than at the back, especially with Manchester United’s Eric Bailly ruled out through injury, and as the tournament progresses this should prove their downfall.

After some poor results in 2019, group rivals Morocco will need star man Hakim Ziyech to carry his club form for Ajax onto the international stage, though with one of the older squads and a high-intensity game plan, Herve Renard’s side will do well to last the pace in the Egyptian summer.

That’s especially the case with as many as 10 players in the squad the wrong side of 30 years old, and three defeats from four winless outings in 2019 (including losses to Gambia and Zambia in their final warm-up games) leave us unconvinced of their prospects.

Looking further afield, Tunisia’s potentially tough route through the knockout rounds leaves them as unlikely winners, especially having lost to the better teams they’ve faced recently (Egypt, Morocco and Algeria). However, with an easy group stage to navigate, they should be backed to top their selection.

With other teams of a similar standing at bigger prices, Nigeria are one to be avoided, while they’re a tad short at the prices to top their group. Ghana lack a stable setup and political interference over selection is never an encouraging sign, while we wouldn’t touch them with a barge pole in the outright betting at shorter odds than Senegal.

Cameroon were not fancied to win the last edition and with mediocre form and a coach (Clarence Seedorf) that’s yet to convince in any of his managerial positions to date, we’d also steer well clear of them.

Egypt and Senegal are the teams that stand out in the betting, but with the latter appearing to possess a squad coming into their prime and with less of a reliance on one star man, we prefer them to the hosts.

Indeed, in Koulibaly they possess the best defender on the continent and although the Pharaohs may be favourites, at the prices they’re a bit short considering a change in style has left them more open at the back.

That’s something we expect to be exploited later in the tournament, quite possibly in what could be an epic semi-final clash between Egypt and Senegal themselves.

Egypt to win the Africa Cup of Nations at 5.00*