Sanchez could feature against Reading.

Cast your minds back to 2004. The year in which Facebook was invented, Athens hosted the Olympics, and of course the year that United met AC Milan on their pre-season tour and were defeated 9-8 in a penalty shootout.

Fast-forward 14 years and the Reds finally served up the revenge that club and fans had obviously not stopped thinking about ever since. Forget Champions League semi-finals, it’s the Champions Cup (or whatever it’s called) that people care about.

Jokes and sarcasm aside, the game against AC Milan meant that United finally managed to secure their first victory of their pre-season tour.

Playing the likes of San Jose Earthquakes and Club America seemed like winnable games on paper for Jose Mourinho and his squad. However as the club embarked on match three of the tour United were still missing a win and some fans were still left with questions regarding this United squad’s competence.

In true United style, Mourinho’s team did not make it easy for themselves, because let’s be honest where’s the fun in that? Rather than a simple win that would put the minds of fans across the globe at ease, the Reds drew after 90 minutes for the third time in a row, deciding that a chaotic penalty-shootout would be much more fitting than a straightforward win.

United kicked-off the game in strong form, and within the first 10 minutes Scott McTominay and Alexis Sanchez had chances to find the back of the net, with Sanchez finally scoring the opening goal in the 13th minute. 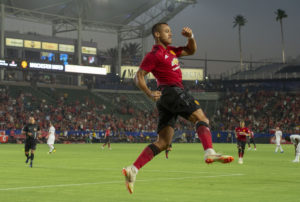 However this was quickly cancelled out by AC Milan who equalised just minutes later thanks to a careless mistake from United’s defensive trio of Chris Smalling, Eric Bailly and Axel Tuanzebe.

The stalemate continued until the final whistle, although United kept goalkeeper Gianluigi Donnarumma busy throughout the game with chances for Andreas Pereira, McTominay, Ander Herrera and Sanchez, who was the standout player of the game. Even Luke Shaw had a chance at goal, who has certainly bounced back from his summer travels.

With penalties calling, nobody would have thought that the teams would need 26 penalties to separate them. No that was not a typo, 26 penalties is what was needed to decide a winner at the StubHub Centre, California.

In what resembled more of a marathon than a shoot-out, Joel Pereira saved three for the Reds, but due to 13 rounds of penalties had to step out of the net to take a shot at goal only to miss.

A penalty shootout with five or six rounds can be painful for fans to watch, so I can only imagine the relief for fans when Franck Kessie’s second penalty was chipped over the bar and the marathon was ended in United’s favour.

The Red’s next game in the International Champions Cup will take place on Saturday against Liverpool and they will bring their time in the competition to a close against Real Madrid on Wednesday. Personally I’d be happy to see a stuffy 1-0 win if it meant beating either of those two and avoiding another penalty marathon.