5 lessons United must have learned from Spurs defeats

There was a time in which Manchester United looked forward to facing Tottenham. Under Sir Alex Ferguson, the Red Devils always seemed guaranteed of three points when Spurs visited Old Trafford while White Hart Lane was a ground where United enjoyed plenty of success under the Scot.

Recently, however, Spurs have proved their big-game mettle under Mauricio Pochettino, winning four of the last six league meetings and the most recent two.

On Sunday, the north Londoners are hoping to earn a third successive league win for the first time since September 1960.

Although United beat them in the FA Cup semi-final last season, their last two league meetings have been thoroughly disappointing encounters, losing 2-0 at Wembley in January and falling to a heavy 3-0 reverse at Old Trafford in August.

Now, as Ole Gunnar Solskjaer plots what would be his sixth straight win as interim boss, we look at the lessons United must have learned from their last couple of league clashes with Spurs.

United’s trip to Wembley in January started disastrously as Christian Eriksen capitalised on the slack defending to score after just 11 seconds.

Harry Kane beat Phil Jones in the air to flick Jan Vertonghen’s long ball onto Dele Alli. The South Korean’s effort came back off Chris Smalling but, with the entire United back-line napping, Eriksen stole in and sent Wembley into delirium.

That goal rattled United immediately and they never fully recovered, with Jones firing into his own net to condemn the away side’s misery.

It’s stating the obvious, but United must stay switched on from the outset. With Kane, Alli, Son Heung-min and Eriksen, Spurs can be devastatingly swift and direct. Thankfully, after keeping back-to-back clean sheets, United’s back four should be in the right frame of mind to avoid a similarly catastrophic start.

Herrera, not Pogba, must partner Matic

In that game, United were completely outplayed in midfield, thanks in no small part to the unconvincing partnership of Paul Pogba and Nemanja Matic in holding midfield.

It left United’s defence wide open and, with Spurs’ front four buoyed by that extraordinarily early goal, it made for a messy evening.

There was some sympathy for Pogba with the Frenchman clearly uncomfortable out of his natural role but Matic endured a torrid time against Spurs’ energy and guile. 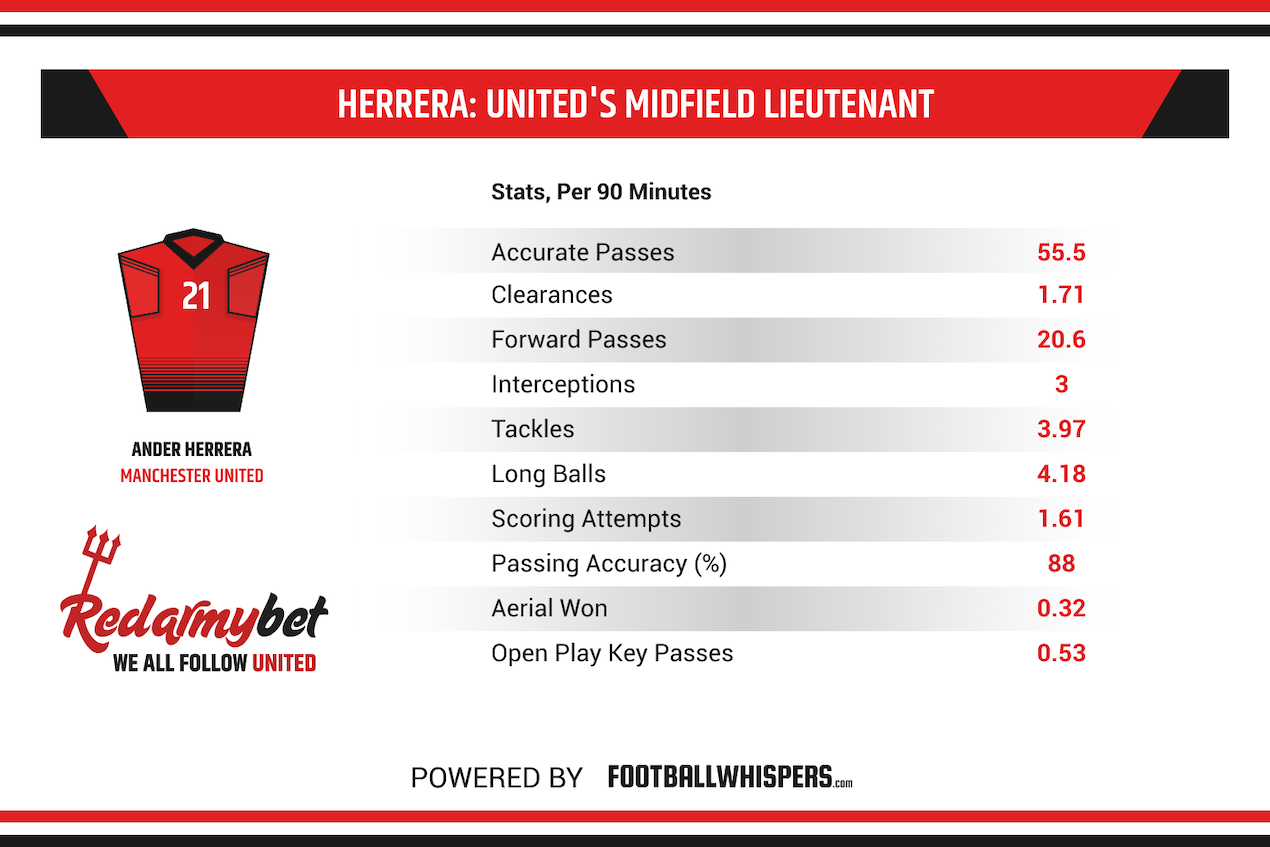 And while United have faced ‘weaker’ opponents during Solskjaer’s infant reign, they have looked a more solid unit with Ander Herrera partnering the Serbian.

The Basque midfielder has averaged 3.97 tackles per 90 in the Premier League this season (only Everton’s Idrissa Gueye boasts a better average among midfielders) and is adequately equipped to disrupt Spurs’ rhythm.

With Herrera and Matic staying deep, allowing Pogba to push higher up the pitch, United’s midfield should have more balance and cohesion to it.

In January, Jones was bullied by Kane. In August, he was bamboozled by Lucas Moura. Whoever Spurs line-up with on Sunday, the 26-year-old centre-back must acquit himself with composure and control.

It won’t be easy. Although Jones has performed well of late, Kane will feel as though he has his number after winning several duels with the United man last time out at Wembley before escaping the defender’s attention for the opener at Old Trafford.

📝 "Here, we look at why Pogba must use this game to prove his leadership on the pitch for United and help Solskjaer pass his first major assignment in the dugout."

But Pochettino may be tempted into starting Lucas Moura given how the Brazilian tore United apart with his pace at Old Trafford. On that occasion, Jones was lucky to escape conceding a penalty after a clear foul on the winger before losing him in the build-up to Spurs’ second goal.

Suffice to say, Jones has not had a happy time of it against Spurs over the last year but he can extinguish his demons with a sure-footed display this time out.

Rashford could be key

Marcus Rashford was an unused substitute in both of the aforementioned games and the 21-year-old can offer a reminder of what Mourinho had been missing.

Like Pogba, the England international has looked buoyed by Solskjaer’s arrival, with goals against Cardiff, Bournemouth and Newcastle.

Back Rashford as first goalscorer vs Spurs at 8.75* with RedArmyBet

In each of United’s four league games under the Norwegian, Rashford has led the line, offering penetrative runs in behind and a clinical streak he didn’t always show in the Mourinho era.

Rashford gives United a different dimension in attack. His raw pace is an asset and, with the confidence pumping through him, his inclusion may prove decisive.

The defeat at Wembley was Alexis Sanchez’s Premier League debut for United. Stationed on the left of the three behind Romelu Lukaku, the Chilean was well-marshalled by Kieran Trippier and struggled to assert himself, losing possession more times (5) than any other player.

That, unfortunately, set the tone for what has been a hugely dispiriting first year at the club but Sunday may offer the 30-year-old a shot at redemption.

Sanchez is 3.15* to score anytime vs Spurs with RedArmyBet

Sanchez is expected to be fit despite straining his hamstring in the FA Cup win over Reading and, while he may not start, his new boss may look to him to make an impact from the bench if United are struggling.

Not much has gone his way since arriving from Arsenal but notching an assist for Rashford in the win at Newcastle on his return from injury may serve as a much-needed boost.

Wembley has been a happy hunting ground for Sanchez. With eight goals in nine appearances, including two FA Cup finals for Arsenal, he will hope that he can silence the majority inside England’s national stadium this weekend.