United played Club America in their pre-season tour which ended 1-1.

As the curtain closes on Manchester United’s pre-season tour, here at RedArmyBet we take a look at the five things fans can take away from United’s time across the pond.

After an inconsistent and sub-par start to his United career, Sanchez has returned to United after his first summer holiday in five years looking like a different player.

The pre-season tour was another chance for the Chilean to make a first impression, and he has clearly grasped it with both hands. He looks better for the summer rest, scoring goals against AC Milan and Real Madrid in the International Champions Cup and earning man-of-the-match worthy performances.

Sanchez has had a successful pre-season tour.

The forward seems to finally be finding his feet with the Reds, and his performances in the USA could be a preview of what he will be bringing to Old Trafford this season.

Could Chong feature for United?

One of the youth players that made a great impression on United fans and the manager was Tahith Chong.

The 18-year-old made the most of United’s lack of forwards in their first game against Club America, helping to create the equalising goal. Chong well and truly showed his intentions to potentially be a part of Mourinho’s first-team plans, displaying a strong, confident performance that caught the manager’s eye.

The Dutch international impressed on the wing throughout the game against Club America, and went on to feature against San Jose Earthquakes and Liverpool. Chong, who won last season’s Jimmy Murphy Young Player of the Year award, does have physical limitations due to his age but stranger things have happened, and the youngster could follow in the footsteps of another winner of the award, Marcus Rashford. 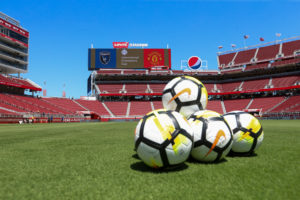 There were thousands of empty seats at Levi’s Stadium in United’s goalless draw against San Jose Earthquakes.

A return of the back three?

In the final three games of the tour Mourinho adopted a defensive line of three.

The likes of Eric Bailly, Chris Smalling, Scott McTominay, Timothy Fosu-Menah and Axel Tuanzebe all featured in this alternative defensive option, which was certainly a welcomed change and has some fans questioning if Mourinho could be considering this formation for the upcoming season.

A back line of three could be a great option for United and last season worked really well in victories over Arsenal, Watford and Tottenham. It seemed to fall by the wayside as the season faded, but would be a good variation for the Reds.

United will play Leicester in their first Premier League game – visit RedArmyBet.com for the latest odds

Are United still popular in the USA?

One thing that has been noted about this year’s pre-season tour is attendance. Against Club America and San Jose there were less than 40,000 fans that turned out to watch the Reds at stadiums that both have a capacity of over 60,000 people.

This is a stark contrast to the 2014 tour in which United set the record for the largest crowd to ever watch a football game over in the USA. 109,318 fans were sitting comfortably in the Michigan Stadium as the Reds were victorious against Real Madrid in a 3-1 win thanks to goals from Ashley Young and Javier Hernandez. 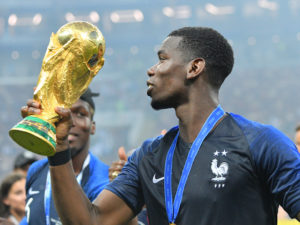 After success with France at the World Cup, Pogba was given an extended break and did not feature on the tour.

This year United returned to the stadium for a meeting with Liverpool and although many expected United’s previous record to be smashed with the meeting of two fierce rivals, the stadium had an attendance of 101,254.

Whilst many speculated that attendance issues were due to the lack of first-team players on United’s tour with the likes of Paul Pogba and Romelu Lukaku still on summer break, United have a great worldwide following and it would not be surprising if the Reds head further afield to the Far East next year to attract a higher audience.

United are at 7/1 to win the Premier League

After what feels like an eternity of patiently waiting, Fred has finally made an appearance for the Reds.

United fans have had an antagonising wait after the midfielder failed to feature for Brazil in the World Cup. However our number 17 finally stepped onto a football pitch as a United player against Liverpool. Although the game ended in defeat the Brazilian, who came on as a substitute, performed well and was part of the starting XI to face Real.

United’s most expensive arrival this summer, Fred impressed in the midfield, retaining possession in tight spaces and displaying great bravery. The 25-year-old was calm under pressure against Real and appeared very sharp and calm when in possession. It looks like Jose has made a good choice with Fred, and if his pre-season appearances are anything to go by, he will slot nicely into United’s midfield.

Pogba Shows the World What United Want to See