Why Does De Gea Struggle With Spain?

For many United fans there is a sense of bewilderment when we watch David De Gea struggle for form and confidence for the Spanish national team, and opinions about him written by sections of the Spanish press, even when he has been playing well, feel as if they must surely be referencing another goalkeeper who coincidentally shares the same name. ‘Dave’ arrived in Manchester as a teenager for £18.9m in the summer of 2011, at the height of Fergie’s ‘no value in the market’ nonsense, and after a shaky start has now inserted himself into conversations about the club’s greatest ever goalkeeper. Having won four of the last five Sir Matt Busby Player of the Year awards, it has at times felt as if the Madrid-born stopper has single-handedly fought off United’s descent into oblivion during its post-Sir Alex malaise. There have been isolated errors, such as the loss of concentration which contributed to Sunderland progressing to the League Cup final in 2014, but these moments are memorable because they have been so rare.

At United support for De Gea is without condition. When he almost left the club to join Real Madrid under Louis Van Gaal, denied a move back to the city of his birth by seconds at the end of the transfer window, he was welcomed back into the fold as if his desire to leave had never happened.

Such is the level of performance he has consistently put in, in what has been at times a distinctly average team, that many United fans have opined that his contribution has earned a move back to Spain, to a better team in Real Madrid, where he could win the trophies that his talent and application deserve. Such thought processes are unique in my 35 years following United and are testament both to the player and the man. 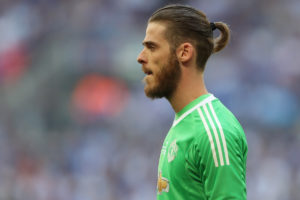 De Gea is a fan favourite for many at United.

De Gea is respectful to his employers, has been unwilling to engage in the sort of toxic PR that footballers with an ongoing desire to leave a club often turn to – see Cristiano Ronaldo envisaging himself in white and declaring that he is a ‘slave’ – and is clearly happy in his club environment, even if there remains an ultimate desire to return to Spain. He is respected and revered by many United fans both as a truly great goalkeeper and also as a human being. He enjoys conditions at United, including a goalkeeping coach in Emilio Alvarez who worked with him as a teenager at Atletico and close friends as teammates in Juan Mata and Ander Herrera, which clearly leave him relaxed and confident.

The same cannot be said when he is with the Spanish national team. Several journalists in both the U.K. and Spain have suggested in recent weeks that De Gea does not feel especially comfortable on international duty, with the group or the atmosphere that surrounds them. He was performing consistently at United for some time before he was finally able to insert himself as his country’s first choice goalkeeper, in no small part due to the previous presence of Spanish footballing royalty in Iker Casillas. As a player who plies his trade overseas and who left La Liga as a teenager he has never garnered the attention that home based players do and there is a sense, in the Madrid press at least, that his failure to push through a move to Real in recent years has led to greater scrutiny and criticism.

Sections of the tabloid press in this country can be pretty nasty, but the region-centric Spanish publications take bitchiness, ongoing agendas and club-focused propaganda to a another level.

De Gea has never felt the love from or felt loved by journalists in his own country and it is simply impossible to recreate the comfort and support structures that he enjoys in England. At United he leads a relatively quiet life. In Spain he cannot take a breath without his lung capacity being analysed in depth.

Check out the latest transfer specials with RedArmyBet.com

After Spain’s humbling penalty-shootout defeat to Russia the nation’s footballing press took few prisoners. Some pointed out that De Gea had performed relatively poorly in both the World Cup warm up matches and the tournament itself. The mistake which allowed a Cristiano Ronaldo shot to fly in off his body in the 3-3 draw with Portugal was a bad one, but thereafter there were no obvious blunders. That the player made only one save in four tournament matches, the least by an keeper to have played three games or more in over half a century, was more a reflection on the opportunities faced, but his efforts in the terminal penalty-shootout were not convincing. De Gea does not have a great record facing spot kicks. Some critical analysis was to be expected in the circumstances, but some of the barbs went beyond what was rational.

Marca produced a list of factors which contributed to Spain’s ignominious exit and De Gea was ranked above the mess that was the firing of Julen Lopetegui two days before the tournament after it was announced that he had agreed to take the manager’s job at Real Madrid. To place the player’s performances as more critical to the failure than the introduction of a new coach in Fernando Hierro without time for preparation defied logic.

For the latest United transfer odds head to RedArmyBet.com

In the aftermath of Spain’s failed World Cup campaign De Gea tweeted that, “To those who supported, suffered and criticised us with respect, thanks. We’re fucked but we’ll get up again and never give up.” Not since his early days at United has the keeper been noticeably impacted by criticism or felt the need to comment on it and he has not suffered a period of form similar to this since that debut season.

Although it is suggested that the desire to play for Real one day remains, United are reportedly hopeful that De Gea will sign a new contract in the near future to tie him to the club into his thirties. He will return from the uncomfortable and critical environment of the Spanish national team squad to his friends and quiet life in Manchester, a place where he knows he will always be loved, supported and respected. He cannot fail to appreciate the levels of acceptance and appreciation he experiences in England and it should perhaps be no surprise that he performs so much better for his club than country.

United fans will be hoping Jose Mourinho can build a team capable of winning the sort of trophies De Gea’s talent demands and that the player ultimately concludes that a return to Madrid is simply not worth the hassle. For Spain he is just another goalkeeper, for United he is the best in the world.

RedArmyBet is the only bookmaker that promises to share 50% of net profits directly with United fans.