Arsenal will be on a high after they made gains on fourth-placed Chelsea at the weekend, but while the Gunners had the tougher assignment as they overcame Maurizio Sarri’s outfit, our boys can take more positives into this clash after Hector Bellerin became the latest Arsenal defender to suffer a long-term injury.

Although this clash can have little more than a physiological effect on the race for Champions League football, such a statement of intent for the winner is not to be underestimated as we’re both locked on 44 points each – just three behind the Blues. 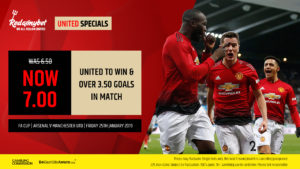 The last time we faced the Gunners, Paul Pogba was spending the first of three consecutive league games on the bench, but he’s played virtually every minute in the subsequent six matches as the only time Ole Gunnar Solskjaer has seen fit to rest the World Cup winner was against Championship outfit Reading in the previous round of this tournament.

He’s made a massive impact worthy of his price tag of late, and though there have been the odd typical defensive lapses thrown in, he’s scored five times and assisted another four goals – most recently earning then dispatching a penalty versus Brighton – and you can’t really argue with that kind of output.

He’s bagged the opener in four of the last five matches in which he found the net across all competitions, while he also opened the scoring the last time he started against Arsenal, and so frankly he can take as long as he likes to reach the ball at spot kicks as long as they fly in.

Although Marcus Rashford has been equally rejuvenated under new management, he appeared extremely tired by the time he exited the field against Brighton and with a slight knee complaint, it would be no surprise if Romelu Lukaku replaced him in the starting XI on this occasion.

The team are pressing with far more vim and vigour than in the days of Jose Mourinho, though it’s seemingly coming at a cost in the late stages with the last half hour against Spurs also a tad sluggish.

That will be a concern for Solskjaer, but if there’s one man who understands the core ingredients of ‘Fergie Time’ then it’s definitely the Norwegian and the team should eventually adapt to the new demands.