The win against Everton showed Mourinho how to get the best out of two players he hasn't always got along with.

Old Trafford hasn’t been the most joyous of stadiums this season, with unhappiness the emotion of the day on a seemingly regular basis.

However, Sunday’s win against Everton saw glimpses of the Manchester United of old – dominant, exciting, and, most importantly of all, victorious.

Part of this was because of the performances of two players that haven’t necessarily always been in Jose Mourinho’s good books: Paul Pogba and Anthony Martial.

Our friends at Football Whispers take a look at how the Everton game got the best out of them, and how that can be replicated in the future.

Manchester United to finish in the Top Four, 4.00*

It’s long been known that Pogba is at his best on the left of a central midfield trio, and that’s exactly the role he was playing against the Toffees.

The addition of an extra man in central midfield doesn’t just provide defensive cover for Pogba as he marauds forwards, but it also provides nearby players for him to interact with, and to distract opponents to create space for his runs.

Jose Mourinho has used a central midfield three before, and it has never really been successful over a long enough period of time for him to make the move permanent. However, Sunday’s match saw Marcus Rashford replace Romelu Lukaku in the striker role, and the young Englishman generally gets more involved in build-up play than the Belgian. 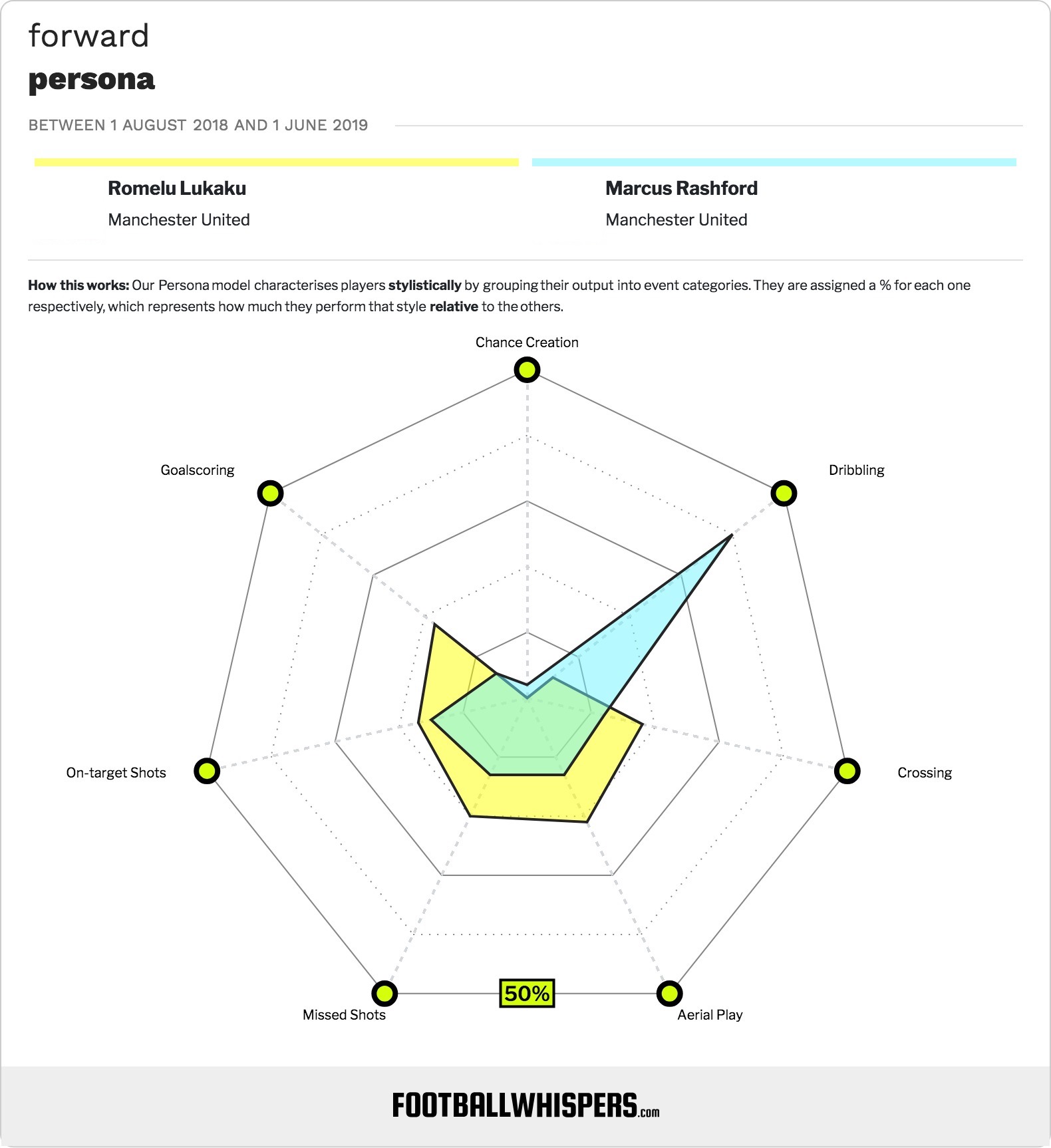 This change helped Pogba – through having more players to interchange passes with – as well as Martial, who can often look like an isolated figure on United’s left-hand side.

Staying wide proved to be a good idea for the Frenchman against Everton – he wouldn’t have scored his goal unless he’d come inside from a wide position and been unmarked – but he got away with it because United were able to keep the ball high up the field in the middle of the pitch, something they sometimes struggle to do.

So much of football is about the connection between players – just one pass being slightly out of a player’s stride can throw off a whole attack.

The two Frenchman were each other’s main targets with passes – Pogba finding Martial nine times, with the reverse happening seven times. Impressively, three of these 16 passes set up a shot, which goes to show how effective this duo can be together. 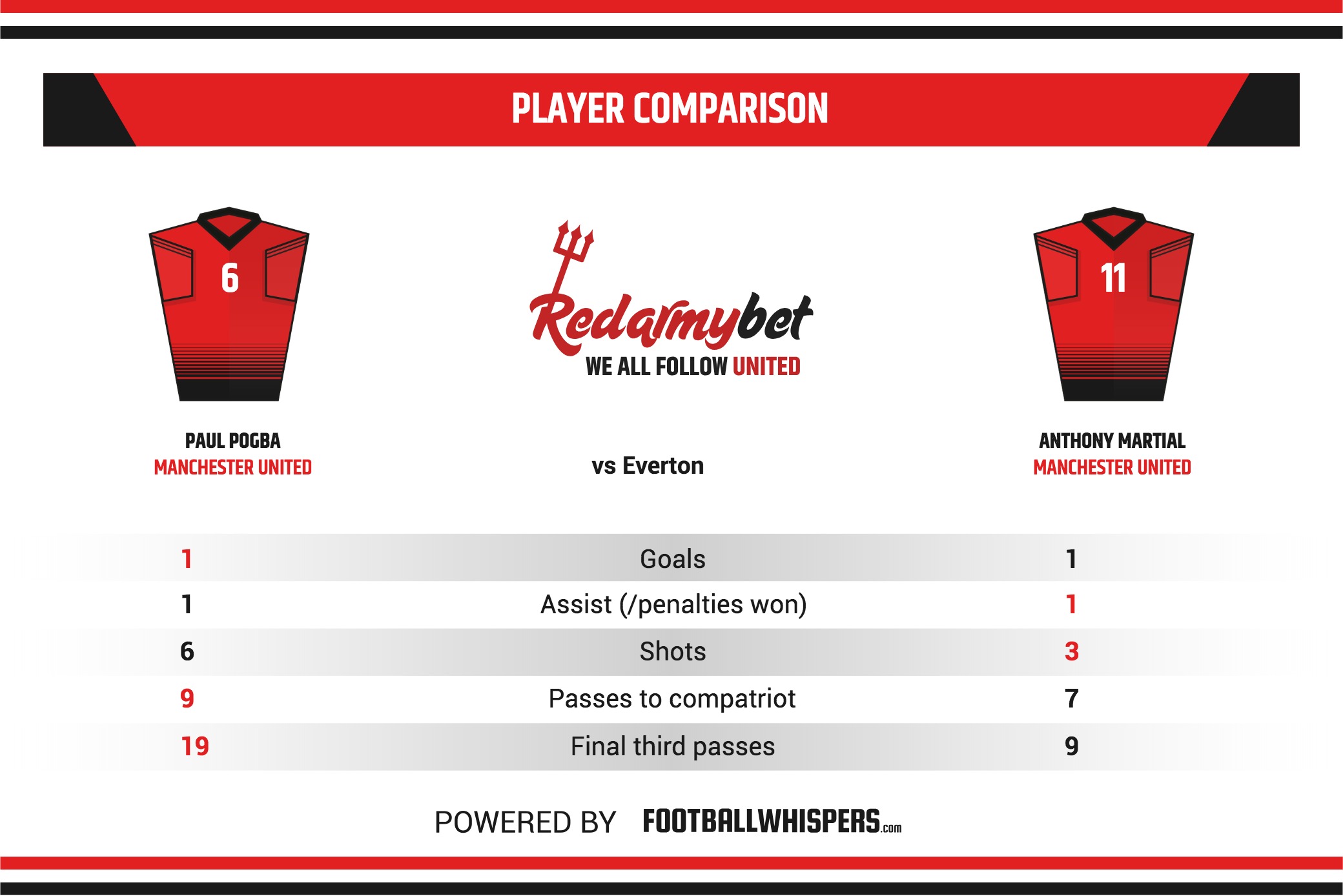 It’s not just Pogba and Martial who seem to benefit from being on the same wavelength. Luke Shaw and Marcus Rashford, both players of a similar age to the two Frenchmen, seem to have a good understanding with their contemporaries as well.

Mourinho gets criticism for failing to instil an attacking structure when his team is performing poorly, but when he gets players together who understand each other then the results can be deadly for the opposition.

Mourinho had experimented with playing Juan Mata behind Lukaku in a No.10 role just before the Belgian was dropped, which didn’t seem to have the desired effect.

Against Everton, Mata’s name was on the right-hand side of a three-man attack on the teamsheet, but in truth he played in a lot of the same areas as he had as a nominal No.10.

Drifting inside, Mata was able to combine with the rest of United’s attackers and bring the best out of them.

While this formula worked against Everton, there’s still a question mark over whether it should be used in the long-term. It leaves the attacking threat on United’s right-hand side very bare, with just the ageing Ashley Young offering width.

Paul Pogba to score a penalty against Bournemouth, 7.50*

Young being the only presence on the right means that he either leaves a hole behind him that the rest of the defence needs to cover, or he doesn’t get far enough forward and United lack an option down the flank.

However, given how well United played for so much of the match against Everton, it seems worth the risk. New signing Diogo Dalot has impressed when he’s featured for the first-team, and in time he may nail down the starting spot for himself.

Playing Pogba and Martial close together, with enough other players around them in the No.10 space of the pitch, might just be the way to get United’s attack going again for good.