We preview United's clash with City at the Eithad Stadium this weekend.

Could Mourinho park the bus?

Win over Juve a confidence booster

Our boys travelled to Turin as huge underdogs and prevailed, but though the smash and grab win was more than welcome and evoked memories of the Sir Alex Ferguson era, it does little to disguise the gap in quality.

Indeed, Paulo Dybala and Sami Khedira had both already rattled the framework before Ronaldo opened the scoring, and such profligacy shouldn’t be expected from Pep’s charges.

However, like City, Juve are amongst the favourites to lift the Champions League and it’s not as though Mourinho hasn’t specialised in thwarting teams throughout his career.

Indeed, we’re the only side to beat City in 26 league matches and also the sole team to beat them in their last 37 at the Etihad.

While there’s every possibility City will take the lead on home turf, there’s conversely every reason to believe in a second half comeback.

Our last eight across all competitions have seen some tough fixtures, notably a pair of European nights with Juve and a clash with Chelsea, with 10 of the 12 goals we’ve scored across these matches coming during the second period, while eight came after the 70th minute. Fergie time beckons. 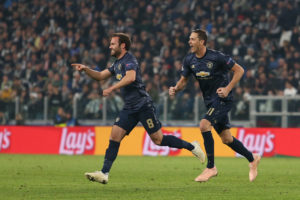 While a consistent selection in the backline has paid dividends with Chris Smalling and Victor Lindelof cementing their status as first choice duo, it’s the Manchester City pair of John Stones and Aymeric Laporte that are more mobile.

However, the attack they’ll be up against has gained its own mobility since Romelu Lukaku was dropped to the bench, with Alexis Sanchez proving more adaptable in the centre.

Lukaku will likely make the bench after missing the last few games with Sanchez set to start, and our movement can cause City’s full-backs all kinds of problems.

Benjamin Mendy and Kyle Walker love to bomb forward, but as long as the wide players are diligent in tracking their runs – Mourinho will accept nothing less – there should be room to exploit between centre-back and full-back on the counter-attack.

Sanchez could feature in the game over Lukaku.

Mourinho enjoyed some early success against Guardiola during his triumphant spell with Inter, and though the City manager holds the upper hand in head-to-head contests overall (W10-D6-L5), it’s noticeable that Mourinho has been more successful when his team is the away side.

Given the shocking disparity in the prices, we’re certainly value to at least pick up a point. 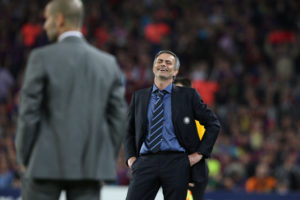 The two coaches have faced each other numerous times.