The Frenchman has looked back to his best recently...

There can be no doubting Paul Pogba’s return to form in recent weeks. Following the departure of Jose Mourinho, the Frenchman – much like some of his teammates – has looked reinvigorated, refreshed and, most importantly, happy.

Pogba has been a key cog during Ole Gunnar Solskjaer’s smooth start to life as Manchester United interim boss, with the World Cup winner having contributed four goals and three assists in his four appearances under the Norwegian.

However, having sat out last Saturday’s 2-0 FA Cup win over Reading after picking up an injury in the win at Newcastle, Pogba is expected to be fit for Sunday’s daunting trip to Wembley to face Tottenham.

Here, we look at why Pogba must use this game to prove his leadership on the pitch for United and help Solskjaer pass his first major assignment in the dugout.

The argument is that United didn’t spend £89million for Pogba to prey on the weaker teams only to go missing against top-six rivals.

Of course, there have been times when the 25-year-old has stood up to the plate in big games. Last season, he was instrumental in the comeback 3-2 victory over Manchester City at the Etihad, scoring twice and also provided a brilliant assist for Alexis Sanchez which helped send United to the FA Cup final.

However, while that helped United edge out Spurs, Pogba has revenge on his mind as he heads to Wembley once again.

In United’s league game against Spurs at Wembley last season, Pogba struggled alongside Nemanja Matic as the two holding midfielders.

Some fans will remember Pogba’s animated exchange of views with Mourinho – who, at that stage, had just signed a new contract with the Red Devils – on the touchline that day. The player was eventually subbed off after 63 minutes and was dropped for the Huddersfield game three days later.

Although Pogba played his part in exacting revenge on Spurs in the FA Cup semi-final three months later, he will be determined to walk off the Wembley pitch with three valuable points this time to bolster United’s hopes of a top-four finish.

Pogba’s harrowing Wembley experience was a significant moment in his relationship with Mourinho, after which the manager seemed to lose trust in him as a big-game player.

While he subsequently started against City, Arsenal, Spurs and Chelsea in the FA Cup final, it was a similar situation in the latter stages of the Portuguese’s reign. Pogba was dropped from the line-up for the visit of Arsenal to Old Trafford in December and was an unused sub as United lost 3-1 to Liverpool at Anfield, which proved to be Mou’s last game in charge.

Having had his involvement in the two most recent games against top-six sides greatly curtailed, the Frenchman should be chomping at the bit to prove a point at Wembley on Sunday.

Of course, thanks to Solskjaer, he will be afforded that opportunity. Under the former striker, United have played on the front foot and have looked more expansive and cohesive in the final third. 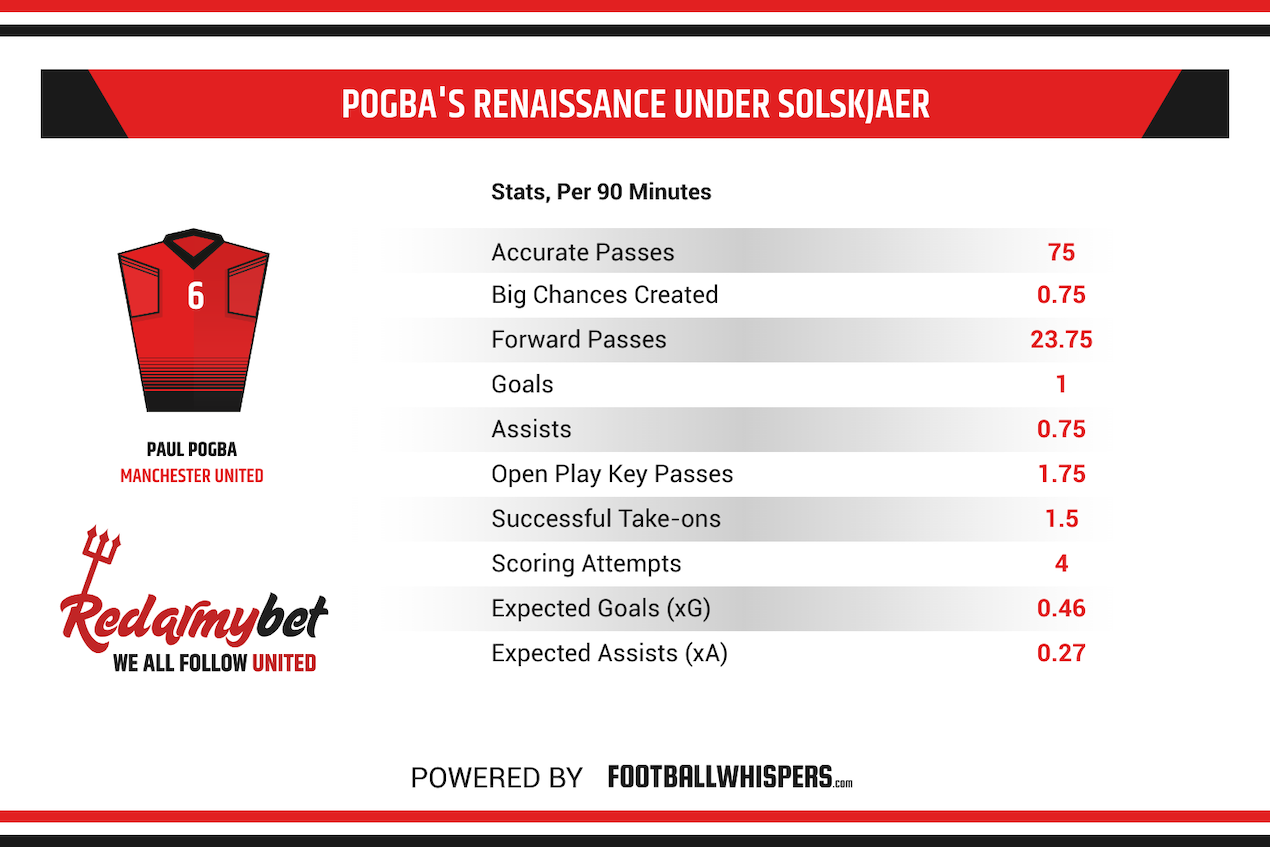 The departure from Mourinho’s pragmatism has served to benefit Pogba, who is averaging more forward passes and open play key passes per 90 under Solskjaer.

Beyond that, with Ander Herrera and Matic operating as the deeper two in midfield, the former Juventus star has utilised his higher base position by making runs into the box, which has helped him add goals in recent games.

Against Bournemouth, both of Pogba’s goals were scored from inside the six-yard area. For his opener, he dashed in between two of the Cherries’ defenders to convert Marcus Rashford’s cross after the forward’s excellent trickery allowed him to get past Nathan Ake and Diego Rico. His second arrived when he rose brilliantly to head home Herrera’s cross.

This is what Solskjaer and the United fans want to see from Pogba; instinct, intuition and initiative. He has shown all three in abundance in recent weeks but Spurs represent a dramatic step-up in the quality of opposition.

If United’s success in this new era is to continue, the onus is on players of Pogba’s stature and profile to shine in the biggest games. With Arsenal in the FA Cup and Paris Saint-Germain in the Champions League knockout rounds to come in the next month, there will be opportunities for Pogba to prove his worth, but he must start by playing a pivotal role in United’s plot for revenge over Spurs.

United finally move out of the dark ages