The Red Devils can put a long, hard week behind them with victory in Wales

At the end of a long, harrowing week which has seen United lose to Liverpool and Jose Mourinho lose his job, the players must pick themselves up for the trip to face Cardiff City.

And they will be led out in the Welsh capital by former Cardiff manager and Old Trafford legend Ole Gunnar Solskjaer, who has been appointed caretaker manager until the end of the season.

Depending on results, United may find themselves in eighth place by the time they kick off against the Bluebirds on Saturday evening so three points would be most welcome as the club look to improve recent form ahead of the busy Christmas period.

The 4-1 win over Fulham at Old Trafford on December 8 is United’s only win in their last six league outings.

The side’s away form has been disappointing. While losing to a table-topping Liverpool side and Manchester City on the road is no disgrace, the Red Devils failed to win at Southampton and Chelsea and have also fallen to morale-crushing defeats at Brighton and West Ham.

Back United to score in both halves vs Cardiff at 2.70 with RedArmyBet*

But they should be confident of opening up Cardiff’s back-line. Neil Warnock’s side have only kept one clean sheet against August and conceded a combined 17 goals in their five previous games against the top six this season. Solskjaer arrives with the promise of attacking football, of freeing United’s forwards from Mourinho’s shackles. This pours Cardiff side are the ideal opposition in that respect.

Cardiff, like United, need points with the club sitting 16th in the table, just two above the relegation zone. They have, however, shown signs of fight in recent weeks. After clinching just their fourth win of the season against Southampton, they recovered from going 3-0 down to Watford, bringing it back to 3-2 to give the Hornets a scare at Vicarage Road last week.

Mourinho altered his team on a weekly basis but Marcus Rashford did enough against Liverpool to retain his spot in the starting line-up.

Paul Pogba has been benched for the last three games but Solskjaer is a known fan of the gifted midfielder so expect the £89million man to be back and raring to prove Mourinho wrong.

Anthony Martial, United’s top scorer this season, may return to the attack but there will be a question mark over Romelu Lukaku, who touched the ball just 20 times against Liverpool. 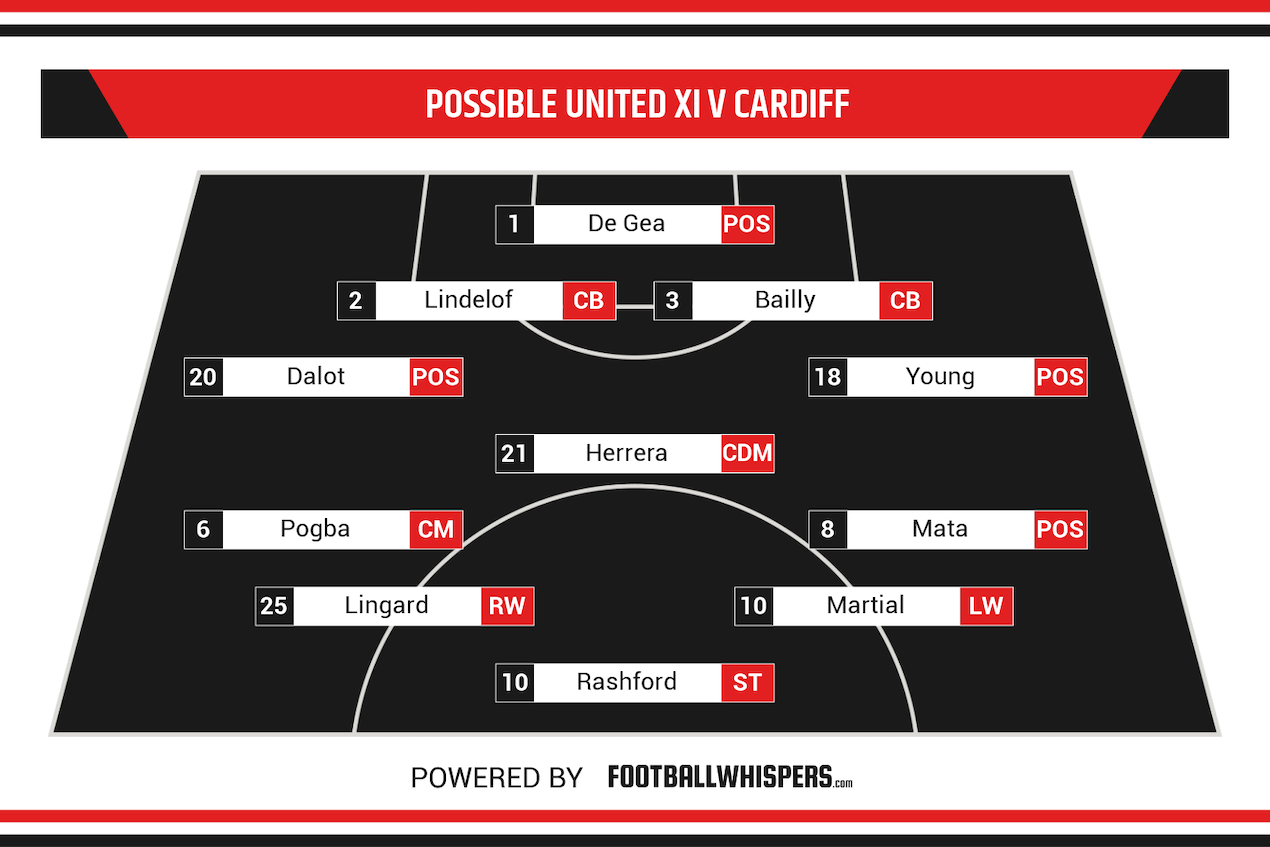 Cardiff have undergone something of a tactical evolution under Warnock in recent months. The veteran coach abandoned the 4-3-3 that led them to promotion in favour of a 4-1-4-1 while sometimes switching to a 4-2-3-1.

It has seen Callum Paterson, who was converted from being a right-back to a No.10 during the latter stages of last season’s push for promotion, used as the lone frontman. The Scot has exceeded expectations as a makeshift forward and will most likely lead the line once again for the visit of United to the Principality Stadium.

Cardiff are a stronger unit at home, but as Watford proved last week, their defence can be prised open with quick, incisive passing. Although United didn’t always manage this under Mourinho, it’s certainly not beyond Rashford, Jesse Lingard and Martial.

With two goals and four assists in his last five games in all competitions, there is hope that Rashford is finding his best form again.

The 21-year-old’s pace, direct running and threat in front of goal will be key to United heading back up to Manchester with three points.

Back Rashford to score and United to win on Saturday at 3.75 with RedArmyBet*

Although his best qualities were stifled by having to defend against Liverpool, the expectation is that, by dominating possession – Cardiff have averaged just 40 per cent of the ball this season – Rashford will be free to express himself and influence the game in the final third.

Although Paterson will lead the line, Cardiff will look to Hoilett to provide pace and creativity in wide areas.

The Canadian has offered glimpses of what he’s capable of in recent weeks. His stunning strike in the win over Wolves is tipped to be a goal of the season nominee while he produced a wonderful goal out of nothing against Watford, cutting inside from the left before curling the ball into the top corner.

United’s full backs have often been found wanting this season and they cannot afford to give the 28-year-old time and space on Saturday.