RedArmyBet brings you a double bet ahead of the Champions League semi-final first leg which sees Spurs travel Ajax and Liverpool host Barcelona.

This tie may have an anticlimactic feel to it after the one-sided nature of the scoreline in the first leg, but though Barca deserved their win, Liverpool were unlucky not to have registered a crucial away goal and much better can be expected of them at Anfield.

Indeed, the Reds have lost just once in 24 matches there this term, all the way back in September, while they’ve won a phenomenal 16 of 18 unbeaten games since the October international break and kept 11 clean sheets.

The Catalan giants are considerably better on their own patch too, winning an incredible 29 of 32 unbeaten Champions League matches at the Camp Nou since 2013/14.

However, in the knockout rounds alone, they’re only W1-D2-L3 on their travels since 2016/17 as each defeat came by 3-0 or 4-0 scorelines. That will offer Liverpool hope, though history suggests their chances of a comeback are somewhat limited.

When teams have suffered defeat on the road by an exact three-goal margin in the first leg of a Champions League knockout match, they may have won 12 of 15 returns since 1997/98, though only twice did they overturn the deficit.

It’s noticeable that on both occasions those sides had an away goal to call upon (Deportivo v Milan in 2003/04 and Roma v Barcelona in 2017/18), and Liverpool’s failure to net in the first leg should ensure smooth progress for the Ernesto Valverde’s side.

Liverpool may be without Roberto Firmino and Mo Salah, but Barcelona have their own absentee in Ousmane Dembele. The French forward’s pace would have been particularly important for the Catalans on the break, with Liverpool set to push forward all guns blazing, and the Reds do have other goalscorers in their squad to call upon.

Spurs may well have Heung-min Son back from suspension, but his and Juan Foyth’s petulance at the weekend means that they’ve prepared for this clash with an energy-sapping defeat on the road at Bournemouth as they played half the game with nine men.

In fact, Mauricio Pochettino will also have to make do without various other players through injury, most notably Harry Kane, while the loss at the Vitality Stadium leaves them with a pathetic nine defeats from their past 10 road trips.

Things are looking much better for Ajax, who eased to a comfortable 4-0 victory over Willem II in the KNVB Cup final to keep their treble dreams very much alive. They can certainly look to history for favourable omens, as teams that have enjoyed a 1-0 success on their travels in a first-leg Champions league knockout tie have gone W13-D4-L1 in the return legs this century.

In fact, since 2007/08, they’ve led at half-time and full-time in seven of nine, and given Spurs’ dreadful away form, Ajax look set to do the double over Mauricio Pochettino’s outfit, who have lost five of their last six matches home or away. 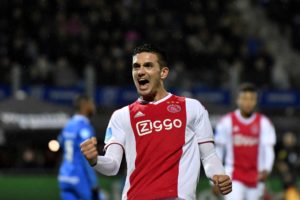