Travelling without moving, thanks to Hector

Thursday 14th of June, 03:13 I’m lying listening to Hector, from my bed I can hardly hear him. 07:27 as I stroll up the hill to Waverley, Hector is blowing warmly through my beard, not much of a storm!!!

My TPE train leaves on time, I overheard one of the staff say that there will be a 50mph limit after Carlisle to Preston, I’m not concerned as my Manchester rendezvous is at 15:01. The train is on time as it slows to stop at Carlisle, when there is an announcement that the train will be terminating at Carlisle, as the lines are down between Carlisle and Oxenholme and that there will be plenty of staff on the platform to deal with anyone’s queries.

There was one poor soul who is trying to get buses to allow people to continue their journey. There have been several delays on the same part of the line during high winds for months now. On the last occasion a local bus company sent him a 14-seater vehicle to assist him in dealing with dozens of irate passengers!!! There are several passengers travelling with Virgin who are stranded also. Rather than wait I end up in a 7-seater taxi with 6 random people, the driver wants cash, however the cash machines in Carlisle are not working!!!  As I sat with my bag on my knee, I decided to see what was on Twitter about the overhead train line problem, someone had posted an excellent photo of several trees draped over the lines. I then felt fortunate as there were several posts from people on a Virgin train that had got through Carlisle and then stopped as the power went down, they were still there 3 hours later waiting on a diesel locomotive to drag them back to Carlisle!!! 97 minutes later we get to Preston and I continue my journey to Manchester.

On the final leg of my sojourn I wait for a metrolink tram, the ticket machine is wrapped in tarpaulin so I cant purchase a ticket. There is a ticket inspector on the tram who asks to see my ticket, I told her that I couldn’t buy one, pointing to the well wrapped device. She said you could have used the other one, I told her that there wasn’t another one, she looked out of the carriage and looked along the platform. She then asked her colleague where the other machine was, he said that it had been removed months ago and that the other one had been out of order for weeks. She asked me where I was going, after my travel traumas so far, my mind wouldn’t work, after a few seconds I told her I was Deansgate bound and she kindly let me travel the couple of stops for free. 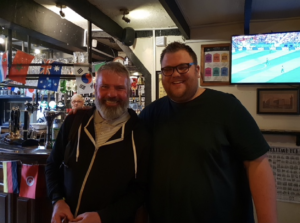 One of the beauties of World Cup games is you can fall upon a game when it’s on and it can be a classic. I think I’ll be glued to the television for a lot of them as if it’s raining then it’s not really an attraction for yours truly to go outside, while if it’s sunny it’s even less of an attraction as I have to put my factor 50 on and it runs into my eyes and hurts them and as we all know I’m a delicate creature. Being stuck in all day watching football will be a pleasure.

Some excellent goals in the opening fixture of the World Cup all scored by Russia. Alexandr Golovin scored an exquisite goal and assisted in two other goals in a man of the match performance. The CSKA Moscow playmaker impressed Jose who was commentating for Russian television. He looked like a potential United signing, at 22 there he has the potential to improve. I am wary of recruiting players during International finals as clubs have made many rash decisions in the past about players after a few good games. If United are interested hopefully Aleksandr has been watched several times by several people for club and country, home and away in all competitions which would then allow a considered decision to made on recruitment.

Of course I also want to see how United players perform, Pogba plays for a French team that’s quite fancied. Rashford and Lingard who I’ve known for a long time, it will be interesting to see how they perform in a huge competition. Rashford’s got a knock and you don’t want to be missing any of the preparation at all and that’s three or four days that he’s missed. Jesse looks quite healthy and he may have a clearer path than Rashford into the first team.

Was asked recently if I thought Scotland had what it takes to qualify for Qatar 2022.

Naturally, a lot depends on the draw you get in the competition, we’ve ended the campaigns well but not started well. You’d like to think Scotland would always qualify but it’s difficult even with an expanded World Cup.

For me the reason anyone is not playing is because they’re not pleasing the coach. You don’t have to like the coach and he doesn’t have to like them, the whole idea is you play well and train well and make it very difficult for the coach to leave you out. I don’t think Anthony Martial has done well enough for Mourinho to be concerned on whether he wanted to stay or not.

There’ll be other players in a similar situation, you can’t have players moping about and being moody. I’d rather have an exuberant and optimistic young player coming into the squad than someone who’s downbeat and negative.

Check out RedArmyBet.com for all the latest World Cup odds including boosted specials.