United legend looks ahead to the Arsenal clash and gives his take on the Bielsa fallout.

United continue to shine for an obvious reason

The biggest differences with United since Solskjaer took over have been there’s no expectations from the fans, especially for any of the upcoming fixtures. There’s no expectations with regards to success this season. I’ve heard people saying seven games ago, “we’d get dragged in to a relegation battle, get a hiding by PSG.” Now people while being more confident, don’t have that level of expectation that would put pressure on the manager.

When you’ve got an understanding, people respond to two different things; positive and negative, moving towards pain or pleasure. It helps when you create an atmosphere of a bit of “go out and enjoy yourself.”

Mike Phelan is a big part of that, he knows that football should be enjoyable, yes it should be hard work, but it should always be enjoyable. When players are happy they train better, their attitude will be better, there’s no expectations. There’s no doubt the mood has lifted since Jose Mourinho departed. The new coaching team have overseen a cracking start. The first game saw the side scoring more goals in a game since Sir Alex Ferguson left, which set the tone and the players are obviously enjoying themselves.

Getting the best from Paul Pogba

Paul seemed very happy being with France and was a World Cup winner, he comes back and wouldn’t say he was definitely going to be staying at United. That gave you an indication that he wasn’t that happy. His unhappiness  was clear all the way through the early part of the season. There’s no doubt he can be one of the biggest players in the world. He’s going out and playing well. The main thing is to work hard and enjoy yourself and he’s doing both.

It’s the same thing for everybody if they’re happy at work, you also need to be told well done. Sometimes you need to be told behave yourself if you’re doing well and make sure you keep it up.

When I was coaching Paul one thing that was obvious was the fact of how much he loves playing football. He was never a problem as a player, he always seemed a happy player and it showed on the pitch.

With some individuals you make sure they work hard they can deal with the rigours of playing in a match. Sometimes a skilful player needs to be coerced but they need that basic level of fitness to make best use of their attributes. Shooting, heading, passing etc, there were certain parts of his game we’d work on with Paul but it was obvious he was a very gifted player.

Juan Mata said: “I like to be positive, I like to create chances and score goals but when I go on the pitch now I think what the manager wants.” That’s what happened to Pogba there were too many things cluttering up his brain rather than just concentrating on the job.

Check out all the latest United odds at RedArmyBet

The whole Marcelo Bielsa fallout has made me laugh as that’s gone on forever, it’s not something that’s new. There’s times when it’s been with permission from a club to send a scout to attend their three previous matches. Managers have always sent people to training grounds. Sir Alex Ferguson would sometimes have closed door sessions when there were things he wanted to work on that he didn’t want the opposition finding out about. The Cliff where we used to train was very open so now and again the manager would do things behind closed doors.  One manager who shall remain nameless, would send a trusted scout to where the opposition were training. This scout was very good at disguising himself as an old man walking a dog so that no one would notice him.

I overheard a conversation about Christmas presents recently and the topic turned to Amazon Echo:

“Yeah I’ve got one of them, but it’s puzzling, how do they get all the music in there, into that little cylinder it must take ages to put it in there?”

There was a pause before the reply: “It’s connected to the internet.”

“Yeah? You won’t tell anyone this story?”

I hope if the person who had that conversation is reading this they’ll forgive me for sharing it! 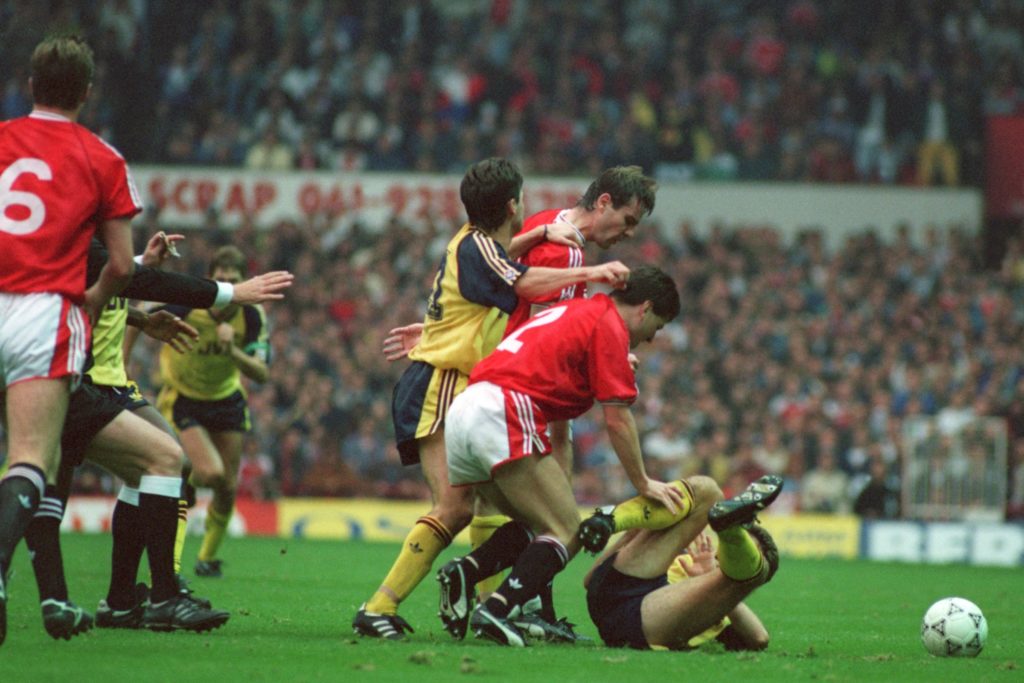 Arsenal clash – hopefully there won’t be a 21-man brawl for this one!

For the FA Cup clash, both teams have got a great chance of progressing, hopefully it will be United. I’d play Alexis Sanchez against his old club. You have to look at what he can do from now until the end of the season. Sanchez bound to benefit by playing in a team that’s going forward.

I had a few interesting encounters with Arsenal over the years, beginning with a game at Highbury where I scored then took a penalty that’s just about landed now. Old Trafford saw the game that ended with both teams being deducted points following a 21-man brawl that I may or may not have started. United had one point deducted while Arsenal had two. Eventually hostilities ended when I told Nigel Winterburn we should put a stop to it and he agreed.

To transfer or not to transfer

People have written off this transfer window but let’s just see what can happen. There was a potential doomsday scenario not so long ago of finishing right down the table. Going from there to this now, I don’t think there will be the same amount of despair if we write this transfer window off.  Eventually an overhaul will be needed. There’s a number of players out of contract and whoever comes in will have to look at it. Every time a new manager comes in they re-evaluate. No one seems to want to leave which was encouraging in a way, but is it because they’re getting paid too much money? That’s the bigger question!

When you look at how United were seven games ago, it’s completely changed, the important part of the season is creeping up. We could still end up not finishing in the top four and out of the CL and FA Cup. Everyone was saying “we’re going to get a hiding by PSG” but now there’s a wee chance. PSG would rather play United seven weeks ago, it’s the same with Arsenal.

No reason why we can’t be a surprise in the Champions League no one’s expecting it. We’ll see what happens. PSG struggled last week – they only scored nine!