England have reasons to be cheerful but Marcus was hard done by.

Overall, I think it’s been an enjoyable World Cup, I don’t understand why all the stadiums haven’t been sold out. I can’t get my head around it at a World Cup, there’s been some terrific performances by teams and individuals.

If you look at England, Gareth had said looking at the group they were in, Belgium were the only one who could really cause them a problem, with regards to which part of the draw they were going in. The way it worked out was potentially beneficial to England but they went and played each game as they had to do. Everybody seemed to think that Croatia were just there to be easily beaten. Now what happens in the game is England starts the game very well and when they got the free kick I said this was a dangerous situation for Croatia, I was shouting at the television that the goalkeeper was too far across to his right-hand side.

Visit RedArmyBet for all the latest United odds including transfer markets.

Kieran Trippier hits an excellent free kick he just has to get it over the wall and the keeper’s got no chance, even though England had a few opportunities after the goal, they scored too early and stopped playing.

When you stop playing, that’s it and it’s happened so many times in big games particularly with teams that maybe haven’t got the experience that Croatia have with players like Modric and Rakitic who know how to close games out and who’ve won lots of things in their career. I think they had a very good game plan and it worked for them in the end. It’s probably the worst situation to be in to lose in a semi-final, particularly at such an event.

There’s lots of comments being made about the future for England and what’s going to happen, I think all you can say is it bodes well for the beginning of the next qualifying campaign, I’m not sure you can say it’s going to be a huge success in two years’ time. I can’t see anyone talking about club football in the same way, saying United, Chelsea, Arsenal, Tottenham, Liverpool or City will be thinking about how they’re going to perform in two years, so I think you’ve just got to look at the next game for England in September.

I thought Jesse had an excellent tournament. Some people were saying Gareth had to pick a team based on physical and psychological markers for the third and fourth place play off. I was very surprised Marcus and Jesse didn’t start, when they came on they made a difference. I think a situation which penalised Marcus was after the first game and the alleged photograph of the team and Raheem Sterling wasn’t in it. I think that swayed the decision about what happened and I think Raheem did okay and Marcus didn’t really get an opportunity, he did start the game against the Belgians in the group stages, but it was almost an impossible task with the team having changed so much.

While it was a great tournament for Jesse, I was slightly disappointed for Marcus and I think that could have all been down to a photograph.

Sometimes I think commentators and pundits are having a competition to get puns in, so you get a particular thing, in the Argentina game when Mercado scored and the commentator said “yes, super Mercado,” it seemed planned, I’m guessing there must have a lot of downtime! I know it’s not easy, but sometimes some of the things they come out with are just ridiculous.

I was asked recently why I don’t do any punditry on television, my answer was simple. I’ve got a face for radio!

I think it’s easier to comment if you’ve coached as well as played, I think you get a totally different perspective of players, teams, managers and coaches when you’ve coached, that’s a key part for me.

People want simple, straightforward commentary, that’s it. The beauty of it is everybody’s got an amazing opinion about everything to do with football.

People need to move with the times.

When it comes to some of the furore over women commentating on the men’s game.  It shows me where we are in the universe, a good example is recently two of the Monty Python team were unhappy with the comments of the Head of BBC Comedy, saying there’s no way Monty Python would be successful now as they’re middle-class Oxbridge types. Terry Gilliam responded, by saying you’re either funny of you’re not. It’s the same with commentating, you either know football or you don’t, whether you’re a man or a woman is irrelevant.

Throughout all sport you have commentators of both genders and it’s right, that should be the case. All that matters is whether they are any good or not, do they understand what they’re talking about and do they make relevant comments. Sometimes that can be down to objectivity or subjectivity depending on what view you have. All the women involved in the World Cup analysis have played a lot of games and some have been involved in coaching as well. 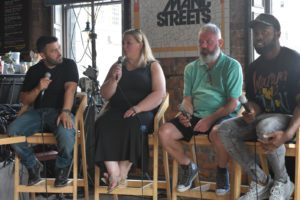 I watched the final in a bar in Manchester’s Northern Quarter (don’t judge me), it was part of an event I was asked to speak at for a live podcast. I always hope that the final is exciting. What a game! Two teams playing attacking, positive football. There were so many talking points, an own goal, the Perisic strike, VAR, (never a penalty!!!), Pogba’s goal, and Lloris making the game more interesting – was he concussed?

The best team lost, but it was a classic.

United’s pre-season is the most critical part of preparation. If you miss pre-season it can be tough on players. Alex Ferguson’s whole idea of a summer break, wasn’t just physical, he felt you needed four weeks from a mental point of view to get all the clutter out of your head and be refreshed mentally for the new season. He would look at getting every player as close to four weeks rest from all football activity, a complete break so they’d be recharged. That’s the challenge coaches have got now post big tournaments.

On the flipside to that, you need to take players with you and there’ll be some young players involved in the training who have to go, it’s a chance for them to be saying to the manager I’m here to do well and hopefully they will.

I didn’t like pre-season, I just liked playing when the ball was out, whenever it came to training I would do whatever was necessary, I must have been doing something right because whenever the game was on I didn’t have any trouble running for the full 90 minutes.

My favourite memory of pre-season was my second pre-season with United, there was always a physical and psychological challenge in a 12-minute run in the blistering heat. I like the sun but the sun doesn’t like me. My idea was just getting through the 12 minutes of running round a field, I was quite happy that I was probably 90 yards in front of Jim Leighton, who was trying his very best, but that wasn’t his thing, the rest of the team are chomping away 150 yards in front of me.

Archie Knox who was the coach says “when the whistle blows, I want you to stop on the whistle.” I’m 150 yards away from the rest, so he blows the whistle. I stopped running and he shouts “McClair! You ****!  You keep ****ing running, I looked over and I thought he was joking, but then I realised he wasn’t so I carried on running, past my team mates at the pavilion, who as you can imagine found all this very amusing as he let me run to the furthest point away from the pavilion and the cars and everyone then he blew the whistle. I must be the only person who’s done a 13-minute, 12-minute run!

RedArmyBet is the only bookmaker which pledges to share 50% of all net profits directly with United fans.