Thrown to the Wolves:

Going to meet people in Hotel Football before the Wolves game was part of the adventure of the day.

I was at a table with two sets of supporters from both clubs, a couple of United fans from Coventry and some Wolves fans, it was enjoyable having a chat with all of them and hearing their thoughts on the upcoming game.

The Wolves fans were really confident and they had no fear owing to their recent experiences. Plus the pleasure they’d had from their start to the season meant they were feeling good about the game. Some of them thought they were going to win. To be fair to the Wolves fans their confidence was well placed, they were arguably the better team.

As a midfield display I thought Joao Moutinho put on as good a performance as I’ve seen from a player in an away team, particularly a promoted one.

I think Wolves will do well, they want to stay in the division, they’ve got a view of finishing high up the table, especially with how well Burnley have done. Wolves fans believe they’ve got a chance of finishing that high and it appears to be confidence not arrogance and the supporters are rightly loving it. 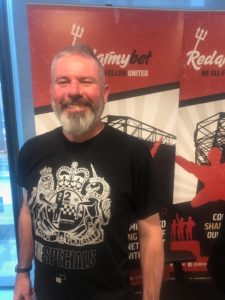 After the game I went to an event thanks to an invite from Mani who I’ve known for a long time.

He’s got my number but for some reason he contacted me via Twitter on the open forum so everyone can see, saying he’s gonna be appearing at Salford Lads Club with Peter Hook. So I went along to the bass player love-in with Mani and Peter Hook.

Ex-City legend Paul Lake was also there hosting the event. It was funny with Mani giving Hooky a good grilling, about him being one of the best bass players in the history of bass playing.

Hooky was on good form talking about the punk days when people at gigs were spitting and how he enjoyed hitting people with his bass who spat on him. He also spoke about the Hacienda.

He reckoned they’d ploughed about £20 million into it, or ‘invested’ if you want to look at it that way. He told us how one night there was a guy with a sub machine gun. Don’t bring your mates was one of his main pieces of advice when it came to business.

There were some raffle prizes including copies of Hooky’s book. One prize was won by Blackburn’s first team coach David Lowe – who to my surprise collected the signed copy of Hooky’s weighty tome and then strolled off into the night.

It was a good night for a good cause.

There’s been a few utterances at United, a few different things and I think a lot of it about taking care with certain things.

Paul Pogba put a message out saying people will make a fuss out of you saying ‘good morning.’  Do it and accept it but if you do it don’t complain if people get involved and make something out of it.

Don’t complain if people make something out of it. If you don’t want a fuss then don’t comment.

Pogba has come under a lot of scrutiny after his social media posts.

Tony Valencia says he liked a message but didn’t read the text. What picture was it? Was it a picture of him from a number of years ago, with a six pack?  Was it one of him semi-clad?

Is that the first thing you do once the game ends? Look for pictures of yourself??

You’d always get told by your wife who would give you feedback, my wife was always objective as were friends who watched the game. The manager would tell you anyway. I don’t see the need in getting feedback from social media.

The only thing you can control is the effort you put it in. No one will question you if you run about, regardless of whether you’re in or out of form.

I’m not saying people are not trying. Teams of the past run the legs off other teams at Old Trafford. I heard teams were frightened. When I’m coaching I always say you want to be able to say at the end of the match I did my best. Alex Ferguson always used to say can you look at yourself in the mirror? Did you give it all?

I’ve had someone say to me when you reflect back their experience would be that Sir Alex Ferguson lost the dressing room after every single game on a Saturday and by Monday they were ready to go to war for him. He would be back on Monday managing the group, managing the players, Jose may or may not be doing something similar.

He seems a manager who if it’s a word that’s meant to be heard by the group he’ll do that. United have had our worst start in almost 30 years, there’s all sorts of stuff going on with other clubs but everyone’s still talking about Man United.

With Jose, I’d stick with him, it’s the earliest part of the season and there’s far too much reaction. For Newcastle at home everybody’s looking to win that, United start winning again.

Does Sir Alex want to offer any advice? Maybe he does. You forget, quite quickly, it’s only a fortnight since Fergie made his return after a life changing event. I’m sure if he was asked he’d give a view of it. He managed the way he managed Jose the way he managed both have been successful.

I don’t think losing his assistant manager should affect Jose [Rui Faria left in the summer]. It appears to me that both Michael [Carrick] and Kieran [McKenna] are very involved – they’re given the chance to participate during the game and Jose seems more than happy. Losing his assistant hasn’t done Klopp, any harm. Sir Alex Ferguson went through six assistants at United or was it seven? See if you can name them? 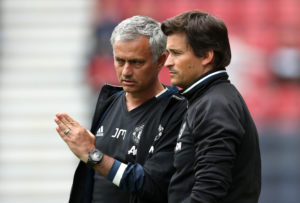 Jose Mourinho and Rui Faria worked together for many years.

There were a few teams that stood out during the Champions League week, Valencia got a great point at United. PSG were unplayable with so many creative options. For Barcelona, Messi was doing things I hadn’t seen him do for a long time.

From the beginning of the game, he was everywhere. Sir Alex used to say ‘all the best players in the world have courage.’

What he meant was they always wanted the ball and he wanted it all the time, and he did great things with it. He was the one that orchestrated the victory, Spurs must’ve been really pleased he’s on his way out. Bet they can’t wait till they go to Camp Nou.

I saw my old team mate Steve Bruce had a cabbage thrown at him. Fans should be allowed to vent their spleen, even when things are going well.

Everybody wants their team to be backed by all the supporters, Steve will look at it as something fairly unique.

It’s dangerous. I mean it’s a hefty thing the size of the cabbage, it could you do some damage, although it wouldn’t have done much damage to his face!

I just don’t know how someone got it in. I got frisked on my way in Wolves and they were quite strict, do they sell cabbage inside the ground at Villa Park? What was the thinking? Were you in the kitchen before the game, thinking; ‘I’m taking this cabbage to the football.’ I’ve already seen social media attribute certain players to the said vegetable!

Can Fosu-Mensah Play A Part At United This Season?