Could Less Actually Be More For Jose In The Transfer Market?

Both Lukaku and Pogba will be looking to capitalise on a successful summer in Russia.

Picture the scene, last season your team finished second in the league to a side owned by one of the richest men in the land and full of young, talented individuals. The press, desperate to see you fail are claiming it could be the dawning of a new era of dominance. To address the situation your manager sells three of his biggest stars and his sole acquisition is a reserve goalkeeper.

Oh and in case that’s not bad enough your star striker is banned until October for kicking seven shades of sh*t out of a rival fan. 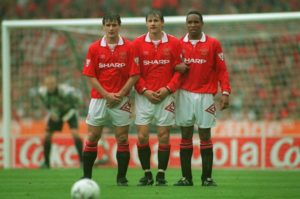 Had Twitter been around in the summer of 1995 there’s a good chance Sir Alex Ferguson – or plain old Alex as he was known then – would have been hung out to dry by anyone with an internet connection. Rant filled 240-character posts would have cascaded over social media in a relentless wave of anger as United’s fanbase screamed that the manager had to be jettisoned in favour of someone more mentally stable.

While many thought Fergie seemed to have lost the plot quicker than Eric at Selhurst Park, the manager proved his doubters wrong as United put together a run following an opening day defeat at Aston Villa which silenced even the most fervent critics. It’s hard to question your manager’s methods when they’re working and that’s why Jose has suffered more criticism over the past few months than at any time during his United career – the trophy cabinet is empty and losing cup finals may be good enough for the Scousers but us Mancs have much higher expectations.

Jose Mourinho faces an almost identical dilemma that Sir Alex faced in the summer of 1995, in the sense that he can either pursue big money signings and try and launch a title-winning campaign based on that ideal, or use the players already at his disposal, personally I think it’s the latter approach which could be the most beneficial.

United are 7/1 to win the first four games of the season with RedArmyBet.com

Before you all start screaming “19 points!!” and sending for the men in white coats, allow me to elucidate. United have world class players in every single position on the pitch. The issue many fans face is that we don’t see enough of the very best our players have to offer, but that doesn’t mean we can’t. If Jose was to give certain players a decent run in the team, show a bit of faith in them and not hang them out to dry if they made even the most extraneous error, maybe we could see the sort of enthusiasm and team spirit that was synonymous with the double-winning team of 1996.

David De Gea is the best goalkeeper on the planet, while Paul Pogba is one of its most gifted midfielders, with a World Cup winner’s medal following a string of emphatic performances in Russia to prove it. Only a few months ago Alexis Sanchez was wanted by all the top clubs as was new-signing Fred. Throw into the mix two young attackers who have the potential to reach the pinnacle of world football, plus a defender who’s shown arguably more raw talent than anyone at Old Trafford since Rio Ferdinand and you have the makings of a title-winning team.

Those who claim United need new signings, will be quick to cry that doing nothing in the transfer market would be absurd, with defence the obvious area that needs improving. Yet sometimes you have to wonder whether the right players for the job have been right under Jose’s nose. United have Tim Fosu-Mensah, Luke Shaw, Eric Bailly, Victor Lindelof, Marcos Rojo (plus new signing Diogo Dalot), but far too often we’ve seen the usual suspects of Ashley Young, Chris Smalling, Phil Jones and Tony Valencia making up the back four. A back four which has been at the club for the best part of a decade and is fraught with issues over form, age and the actual ability to defend, something I’ve heard is useful when it comes to being a defender.

Anyone who’s ever seen Fosu-Mensah play couldn’t but be inspired the same way anyone who’s faced him couldn’t help but empty their underpants. The lad’s hugely gifted and can mix the physical side of defending with the skilful art of attacking with ease. Luke Shaw has been debated about more than leaving the EU but as I’ve said time and time again, there is a good player there, we’ve all seen him, he just needs focus on his football instead of his fridge.

It’s centre back that seems to be the area most fans are quick to highlight as in need of new additions, but again, I’d hark back to the mid 90s and the idea of trusting in our younger players.

Bailly is a supremely gifted defender, I’d happily take him over John Stones or Nicolas Otamendi, don’t @ me, he’s better. The issue for Eric isn’t ability, it’s injuries. Keeping Bailly fit is essential for United as he’s the best defender at the club and it’s no coincidence that in his 13 Premier League appearances last season the Cameroonian ended up on the losing side just once – a record which included wins over Liverpool and City.

Check out the latest United odds including specials and outright markets with RedArmyBet.com

Anyone who saw Lindelof play for Sweden at the World Cup will know he’s a talented defender, one that’s struggled to come to terms with the pace of the Premier League, not to mention the expectation at United, but hey maybe patience rather than intolerance could see him come good.

Of course, there’s a lot of ‘ifs’ ‘buts’ and ‘maybes’ when it comes to the Reds relying on some of the aforementioned players and buying a Toby Alderweireld or a Willian could be a better option than giving Lindelof or Anthony Martial a chance. It could also represent the kind of short-termism that’s dogged the Reds for far too many recent years.

If United were to trust in youth and at least looked towards building something for the future then maybe the fans, atmosphere around the club and even the manager could start feeling that the United way, was being reintroduced in more ways than just a chant.

We want youth to be given an opportunity but we don’t want to Jose trust it, we think Martial and Marcus Rashford are good enough for United, yet we cry out for an Ivan Perisic or Gareth Bale. 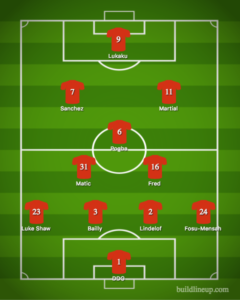 It’s one or the other, either our younger players are good enough or they ain’t, I happen to think they are.

Look at the starting XI available to Jose and the players he can call upon as back-up and tell me that isn’t a side good enough to challenge City, Liverpool or anyone else who fancies getting closer to our 20 titles.  The Reds may not have a Class of 92 but there’s enough young talent at Jose’s disposal to mount a title challenge that could just be the envy of our big spending rivals and get Old Trafford buzzing again.

RedArmyBet are the only bookmakers that pledge to share 50% of net profits directly with United fans.