It’s fair to say that Gareth Southgate has surprised everyone since taking over as the England manager. A decent but uninspiring club manager, and a bland football pundit, installing him as the new boss of the national team did nothing to pacify fans who were disgruntled and angry after England’s dismal showing at Euro 2016. Confidence and belief had drained away during Roy Hodgson’s tenure, and Southgate’s appointment offered little hope of a revival.

It’s to his credit that he has turned that perception on its head. However England fare in this World Cup, he’s already improved the team, injecting it with youth and purpose after dismissing established players whose form and fitness had been found left wanting, and, most tellingly, introduced a style of play that is progressive and encouraging. There’s an emphasis on high pressing, quick movement, and retention of possession, and, more fundamentally, a formation designed to suit the players England possess and maximise their talent. Playing 3 centre-halves with overlapping wing backs is starting to regain popularity once more but Southgate has made it an integral part of his game-plan, despite many managers remaining resistant to it, preferring the more familiar and traditional back four.

England are 8/1 to win the World Cup with RedArmyBet.com

Jose Mourinho is in that camp. Despite United very occasionally playing 3 at the back during his reign, for the majority of the time they have relied on the 4-2-3-1 formation that Mourinho heavily favours. Watching England play so well recently, though, made me wonder if the system would suit the current United team.  United are expected to recruit a new centre-half this summer (Toby Alderwield and Jerome Boateng are the most likely candidates at the moment) and that new signing could line up alongside Eric Bailly (comfortably United’s best defender), and one other. Phil Jones still hasn’t evolved from looking excellent one moment to calamitous the next, while you would struggle to find a player less suited than to a possession-based system than Chris Smalling. Marcus Rojo would be a good choice to operate on the left of the back three, supplying solidarity and balance, while being comfortable on the ball. Lindelof had a poor start to his United career, but gradually improved as the season progressed, and his passing ability suggests he could prosper in this formation.

Ashley Young is proving effective in the left-wing back role for England, and could easily replicate that form for his club side. However, Luke Shaw would be a better fit for the role, giving him the licence to attack at pace down the wing while counteracting the number of defensive lapses he’s guilty of when he plays at left back. Equally, if another attacking left-back is signed, such as Sandro, they would also suit a more advanced position.

Check out RedArmyBet.com for all the latest World Cup odds including specials.

On the right, Diego Dalot’s pace and attacking ability could be exploited as a wing-back. Valencia, whose form has regressed over the last 12 months, would still be able to fulfil the role, bridging the gap between his right-back credentials, and his former position as a winger.

England play with one defensive pivot in midfield, which United could do similar with Matic, freeing up Fred and Pogba to operate further forward and affect the game higher up the pitch. 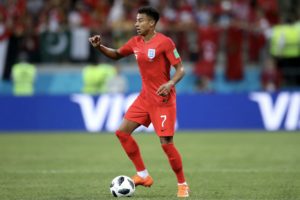 Lingard has shone for England in Southgate’s system.

Jessie Lingard has shown he can be excellent in this role too, and it would also suit both Herrera and Mata. Add Pereira into the mix and it’s clear that United have plenty of options of how they could set up the midfield, and, crucially, it would allow key players to be more heavily involved in United’s attack.

It would also enable United to select 2 strikers. It’s been a long time since that happened at Old Trafford on a regular basis. Lukaku’s selection is a certainty, but it invites the possibility of Rashford alongside him, a prospect that would excite all United fans. Equally, Sanchez prefers to play centrally, and Martial, should he stay, would also offer much more than he does when restricted to the left flank. Essentially, it would relocate United’s best finishers into their favoured positions, and dramatically enhance the team’s goal threat.

It’s unlikely that Mourinho will be swayed away from his favoured system, despite the fact it forces important offensive players (Rashford, Martial, Sanchez and Mata) out wide when they would be more effective in a central role. Should England continue to do well with this formation, though, it might just give Mourinho something to consider.

RedArmyBet.com is the only bookmakers that promises to share 50% of net profits directly with United fans.

Lukaku and Why England Should Be Afraid, Be Very Afraid