Mourinho's men have struggled in the first half of late, but it's not been like that all season... 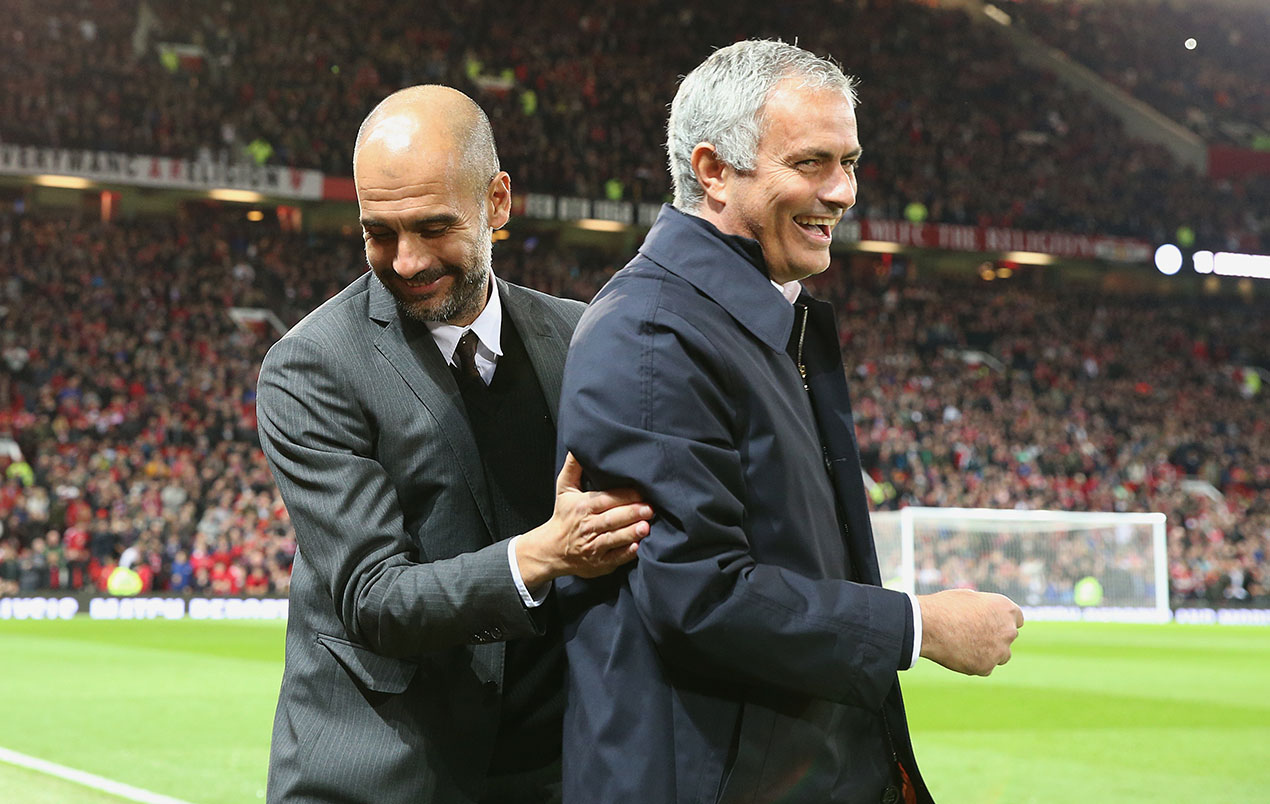 The Manchester Derby is also something to worry about nowadays. Ever since the money came in, City are a different proposition. In the entire Premier League era, United have taken the win exactly 50 per cent of the time; in the last five years, it’s been just 30 per cent, with City now winning half of the time.

This time around, some are worried about United’s slow start to matches of late. Will Pep Guardiola’s side race to a lead before Jose Mourinho’s men have even got going?

Our friends at Football Whispers have looked at the numbers.

Sometimes managers might dismiss a negative press narrative about their side. Mourinho, however, has been very honest about the fact United have struggled to hit the ground running in matches recently.

“It’s even good fun for the fans, but football is 90 minutes and, especially when your opposition is strong, if you give 45 minutes’ advantage or even 20 or even ten then you have a mountain to climb,” he said before the 2-1 win over Juventus in Turin.

“The good thing is lately, apart from the [first] Juventus match, we were strong enough to climb the mountain and to change results in second halves and last minutes.

“But because we are speaking about tomorrow’s match when you play against a super team if you give advantage it is very difficult to climb the mountain then.”

City might even be more of a super team than Juventus, and it will be a lot higher mountain than usual if United go behind early.

In United’s last five league fixtures, six of the nine goals they’ve conceded have come in the first half.

Wednesday night in Turin might not have been as good a first-half performance as some in the media were saying on the night, but keeping a 45-minute clean sheet against the Serie A champions was a step in the right direction. 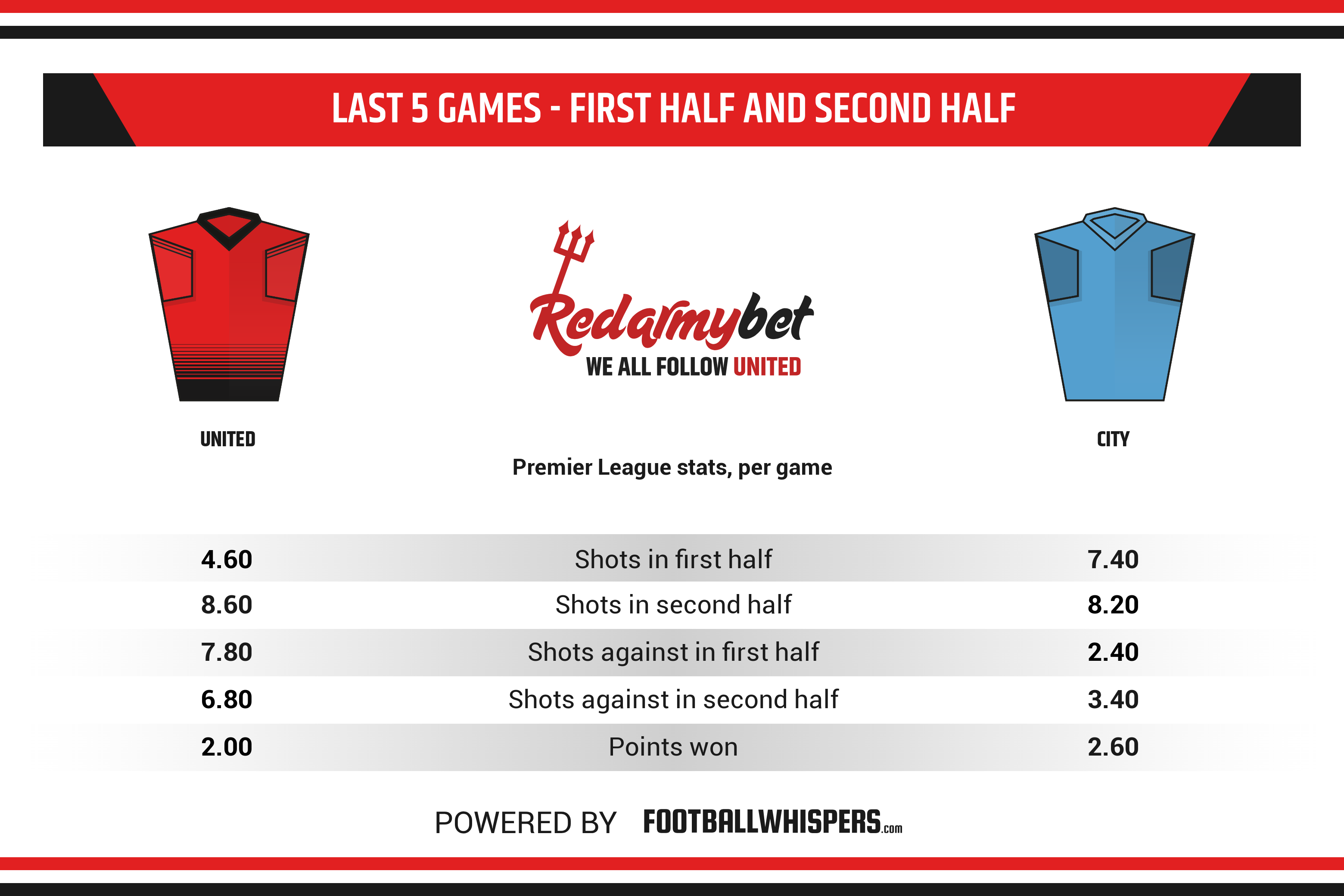 However, it’s United’s attack who need to turn up most in Sunday’s first half.

It’s curious that these slow starts have only really happened across the past five or six weeks.

Across the Premier League season as a whole, the amount of shots that United are taking and conceding in the first half is more in line with the rest of the league.

United’s attack is still a little slow, with only 41 per cent of their shots in the first half (although the majority of teams take just less than half of their chances in the first half, with the game opening up after the break). 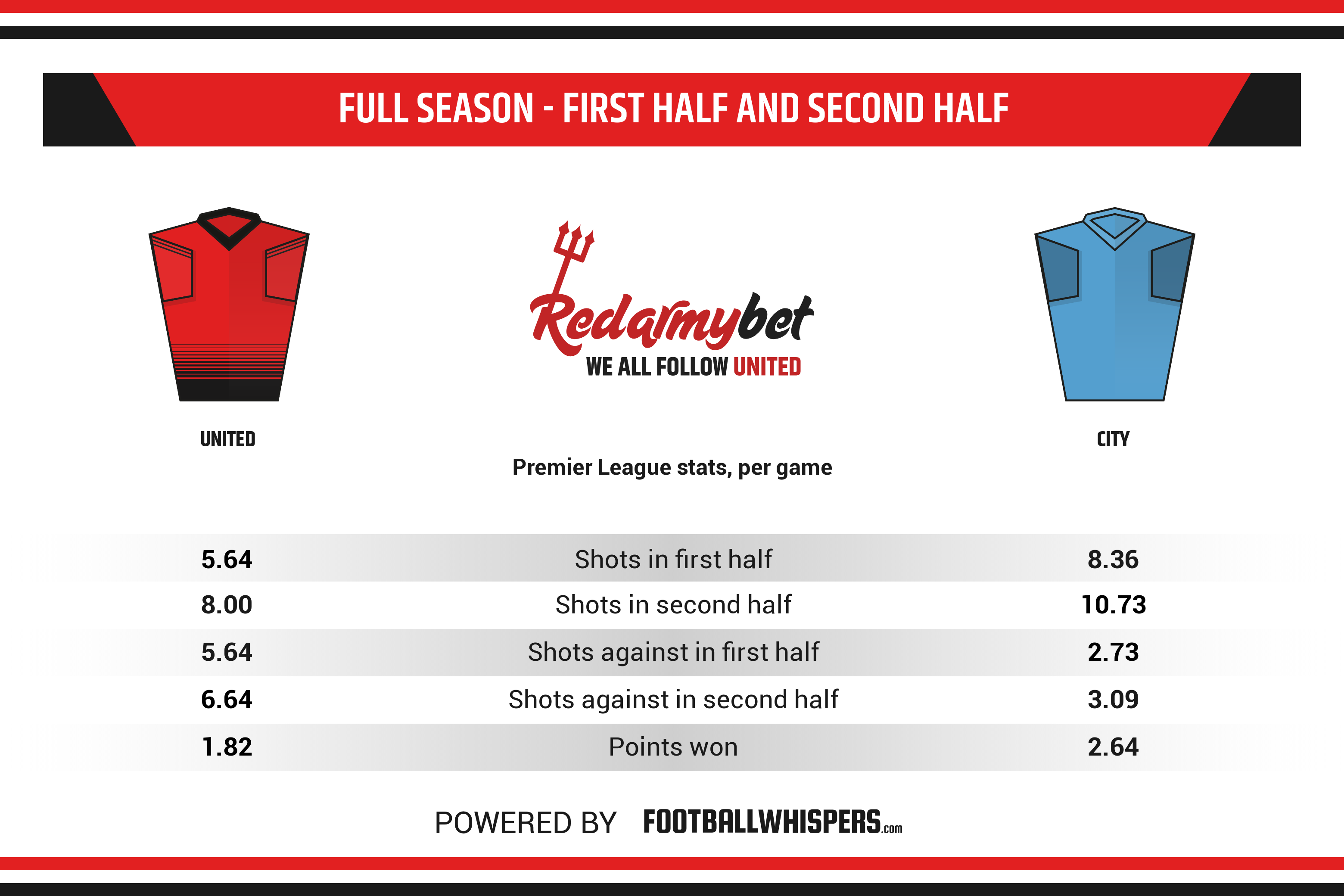 For the defence meanwhile, it’s 46 per cent of shots conceded in the first half, a very normal rate compared to the other 19 teams in the division. It’s just since late September that the slow starting became a feature of Mourinho’s side.

In a way, this is a reason to be hopeful about the Derby.

At the start of the season, the entire ninety minutes was often a cause for concern at United. Slow starts aren’t ideal, but they at least lead to good performances at some point in the match.

Whatever work has been done on the training pitch at Carrington has, slowly, yielded results. A further improved performance could come at the Etihad stadium on Sunday.

Whatever the truth about United’s recent slow starting, the wins against Juventus, in particular, and Bournemouth will give the team confidence. And, as we’ve seen so often, confidence can be the key difference.

“I think that we believe more that we are a good team, we have also improved and mentally we are stronger,” Nemanja Matic said ahead of the Derby. “I think in the last four league games we have three wins and a draw, so this gives you more confidence, but we deserve that and will try to continue in this way.”

“I expect a very difficult game,“ he told the club website. ”They are a very good side, they play good football, they score a lot of goals in every game, but we also have our qualities which we have to use.

“We have to stop them in their attacks, there is a way to do it and the manager knows that. We will prepare for the game. I expect a hard game but, in a derby, everything is possible, and we will be ready for that.”