Crolla’s Diary: Getting Ready for Fight Night, Being In Smith’s Corner & Jose In

Former World Champion Anthony Crolla gives an update ahead of his big fight next month.

My training is going fantastic, just did two hard sessions before coming into the office, gonna do a bit of hot yoga later, help with the recovery before sparring tomorrow.

Four and half weeks to the fight so the last three and a half weeks of hard training, sparring’s just starting.

I feel great, on schedule, you don’t want to be ahead of schedule and do too much.

It’s just about getting some rounds in now ahead of November 10th.

What a weekend of sport that’s gonna be, with the derby, the boxing, there’s going to be a few relationships to put to the test. Some partners wont be seeing each other for a little while.

The derby at the Etihad, the last time I was there, probably a bit sad to say it as a United fan but it was probably the highlight of our season, last season.

I’m just being honest, bad times in many ways but it was a great feeling and I was one of the ones lucky enough to be there, although I did feel like leaving at half time!

People are already talking about ‘the biggun’ world title fight after, listen I would never look past Daud Yordan, anyone who knows the boxing knows Daud Yordan.

I’m studying him, Joe’s studying him, coming up with a game plan, I’m training hard, I’m known as a hard trainer and I’m training as hard as I ever have. I know that if I’m not at my best on November the 10th it won’t be good enough to beat Daud Yordan.

For all of the latest boxing odds, click here

In Callum Smith’s corner for the big win over George Groves.

Over in Jeddah, what an experience, get off there and landing, I’d never seen anything like it, there was a guy from Manchester on the bus from the terminal, he asked me what I was doing over there and I explained I was there for Callum’s fight.

We got to the terminal and I let someone through and he was like ‘Ant you can’t be doing that, it’s every man for himself’ and he was right, I just saw people getting bundled about, there was no queueing system at all.

Absolutely mad, I was lucky as for once I went left on the plane, I felt what it was like to have first class treatment for once. Being out in Jeddah, they treated us great, so many of the hotel staff were at the fight, they had such an amazing night.

RedArmyBet are the only bookmaker dedicated to sharing 50% of net profits with United fans.

There was no alcohol over there and after the fight the hotel staff served us what looked like champagne and I thought there may have been some form of pardon but it turned out it was just sparkling fruit juice.

But good times regardless, the main thing was the result and the performance, it was great for Callum and for Joe as well.

Callum, genuinely, you couldn’t meet a nicer lad, he’s so humble, he’s just won one of the greatest prizes in the sport and you wouldn’t know. I said to him “I bet you just wanna get home and walk the dog don’t you?” As he’s just got a Frenchie and he did.

For Joe [Gallagher] you could see how much it meant to him, the effort he puts in as a trainer, for him to have a fighter that wins those prizes, there was a clip of him in the ring where you could see how emotional he was.

It was just a brilliant night, there was no sleep that night because of the time we got picked up, there was a few tired heads the next day but I think we were all running on adrenaline.

Leading up to the fight Callum looked great, he makes that weight well, and he was eating well, he was even eating ice cream one night, and Scott the nutritionist did a great job.

I thought if George doesn’t get Callum out in the first few round there’s no way Callum loses this fight. I’ve said before ‘bodies don’t win fights’ but Callum looked great. Joe studied George for hours upon hours, Callum took George’s jab away from him then the fight became his.

Being in the corner you could sense how heavy-handed George was, but it was somebody shot from Callum, it was two elite fighters in there. Now Callum is back home with all the marbles as they say and he can pick a fight with who he wants. 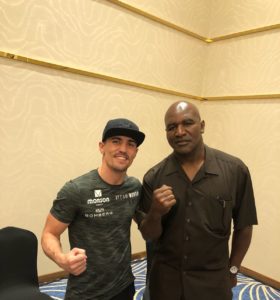 I’m not one for asking for pictures too, but he literally was stood next to me and I thought ‘I’ve got to go for it’ – I remember his first Tyson fight, the wasn’t too many pay-per-views, we stayed up all night. We got it at my nana’s house, my uncles and everyone came round, we didn’t get it both houses, it was probably only about £9.95 back then!

He’s a big lump as well, I was looking at him thinking, ‘how did he ever make Cruiserweight  although he still looks well, he carried on far too long be his faculties are all there.

There was a good crack between the Smith brothers actually, Paul and Steven were giving each other, Steven about “did you watch the contender?” Paul like “yeah Evander it happened to my ear as well!”

Sometimes, I say it to Joe, there was very little where we was, there was a frozen yogurt place and a Starbucks across the road from the hotel. We were laughing, saying boxing brought us to Saudi Arabia. How does it happen? Like with Holyfield, this is a guy I grew up watching, it’s crazy at times where sport takes you.

I’m a McGregor fan, but you can’t say what he says and go on how he does and not expect major, major backlash when it doesn’t work out for you.

Some of the things he said and the buttons he pressed, if someone done that outside, they’d deserve a belt [to the face not a championship belt]. They deserve a belt and I’m talking outside the ring.

I don’t know if I half respect Khabib for the fact he done it there and then and flew out of the octagon but if he would’ve went backstage and stuck it on McGregor, would that have been any different to someone abusing and giving the stick out on the street, would they not expect to get a belt?

I know it’s business and McGregor is a businessman, but if you bring religion into it and putting alcohol in his face when he doesn’t drink, that man’s gonna lose his cool. Do I think Khabib was in the wrong? Can you blame him? Not at all.

Click here for the latests UFC odds with RedArmyBet

Jose under a bit pressure.

I’m Jose in, he’s controversial at times, he wants the best out of his players.

I believe after the Newcastle win so many more people are behind. It may be papering over the cracks a bit that it was against a struggling team, but it was a bit like United of old.

Hopefully it can kick start our season, I’m not sure whether the international break is a good thing or a bad thing. He’s got to deliver trophies that’s how he’ll be judged at the end of the season.

After the international break we’ve got to kick on.

Don’t get me wrong sometimes, I don’t always agree with the way he goes about things, but he’s a winner and I think he’s the right man for the job.

Check out all the latest Premier League odds at RedArmyBet.com

Will Jose Give ‘Forgotten Man’ Another Chance Against Brighton?