They both impressed against Young Boys

Manchester United got their Champions League campaign off to an impressive start with a 3-0 win over Young Boys.

The Swiss champions looked energetic early on but the Red Devils rode some early pressure before assuming command of the clash as Paul Pogba scored twice before half-time, before Anthony Martial sealed the points with a third on the break.

The match in Bern also marked the senior debut of teenage right-back Diogo Dalot who, along with Luke Shaw on the opposite flank, offered United impetus and imagination in attack. Our friends at Football Whispers look at how Shaw and Dalot represent United’s future at full-back.

There were plenty of reasons for Jose Mourinho to smile on Wednesday night. Pogba looked in the mood, Martial bagged his first goal for eight months and, despite early waves of pressure, David De Gea kept a clean sheet.

But it was perhaps the performances of Dalot and Shaw that would have pleased Mourinho the most. Having recovered from the concussion picked up on international duty with England, Shaw once again lit up United’s play down the left, pressing high, making incisive runs and creating opportunities.

Back United to win their Champions League group at 2.60 with RedArmyBet*

Coupling his attacking enterprise with defensive solidity, it was another thoroughly satisfying 90 minutes for Shaw.

Dalot, however, caught the eye as the exciting unknown quantity in this United team. With Mourinho deciding that Antonio Valencia’s knee troubles would only be exacerbated by the artificial 3G surface at the Stade de Suisse, Dalot was given his first chance to impress in the first team.

Following his £19million summer move from Porto, the 19-year-old has been made to wait for Mourinho’s call but, having impressed for the under-23s, the Portuguese coach considered the Champions League opener was the right time.

For a teenage debutant, away nights in Europe can be daunting. Walking out to an electric atmosphere in Bern, though, Dalot seemed defiantly unfazed. It didn’t take long for the young Portuguese defender to show United’s travelling support what he could do either, whipping a dangerous cross into the box after just 75 seconds, just narrowly missing Romelu Lukaku’s head. 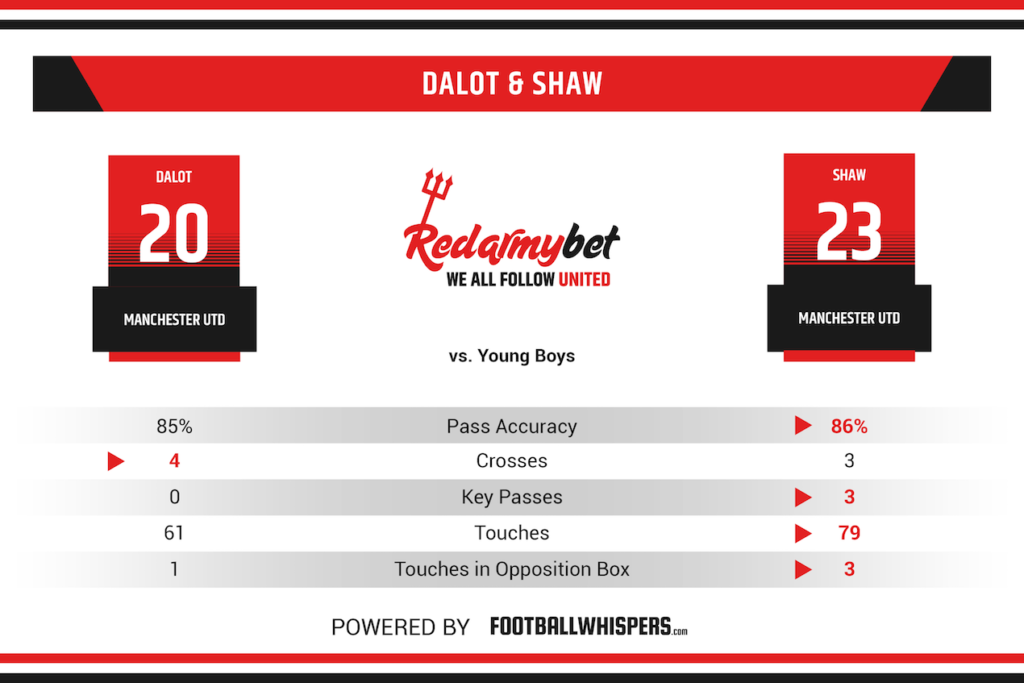 One of Dalot’s most talked-about attributes is his crossing. So many full-backs possess pace and power in the modern game, but having a right-back armed with a wicked cross should be a genuine asset for United, particularly with Lukaku to aim at. Dalot also appears to be a player who will get fans on their feet, as evidenced by his willingness to take the Young Boys defenders on with a step-over or swift change in direction.

Valencia is United’s longest-serving player and is also the club captain. However, the feeling is that, at 33, his best years are behind him and while he will remain a respected figure in the dressing room, it’s refreshing to see his long-term successor impressing from the word ‘go’.

Shaw’s situation is not too dissimilar. Ashley Young was Mourinho’s first-choice left-back last season, his consistency earning him a spot in Gareth Southgate’s England side for the World Cup.

Young is also 33 and, having fallen out of favour under Mourinho, Shaw looks to have made the left-back slot his own. Fully recovered from his head injury, the 23-year-old was full of forward momentum down the left flank, popping up in pockets of space which offered Fred, Nemanja Matic and Pogba an outlet from midfield. Indeed, it was his aggression down that side which resulted in a penalty for United when his cross struck Kevin Mbabu on the arm.

🗣 Dalot: “I felt very good. The team mates helped me so much to be ready for this game, I’m happy for my debut and I’m happy for the win." #MUFC

Considering that Shaw was largely absent from the first team last season, his re-emergence, coupled with the Dalot’s promising debut, is effectively two new signings for Mourinho.

Against Young Boys, United lined-up in an aggressive 4-3-3, with Martial and Marcus Rashford supporting Lukaku up top. With Dalot and Shaw’s willingness to push high up the pitch, it can allow Martial and Rashford to shift infield while Matic and Fred offer protection from a deeper position in midfield.

Back Paul Pogba to score first against Wolves at 8.25 with RedArmyBet*

In theory, with the talent on the pitch, such a system should suit United. Last season, Manchester City’s investment in full-backs paid off handsomely and, although United have not spent nearly as much, having a style of play which allows Shaw and Dalot to maraud forward could yield similarly striking results.

Of course, the Young Boys game did not provide the complete picture of Dalot. As the game wore on, United grew increasingly comfortable and, as such, the youngster’s defensive abilities were tested as robustly as they will be on a weekly basis in the Premier League.

But Mourinho, who called Dalot “the best full-back in his age group”, clearly rates him highly. With a solid debut under his belt, United fans will hope that Mourinho sticks with the former Porto man for the visit of Wolves to Old Trafford on Saturday.