This is a critical period for Mourinho...

On the one hand, Jose Mourinho would have been chagrined by the latest international break. His Manchester United side had won, something which has been increasingly difficult to come by of late, meaning their fresh injection of momentum was immediately stalled as the Nations League took centre-stage once more.

On the other hand, though, Mourinho’s frustration will have been tempered in the knowledge that internationals gave him ample time to plan for a potentially defining period in his tenure as United boss.

Here, our friends at Football Whispers look at how Mourinho can start this series of testing fixtures with a win.

The parameters of Mourinho’s ‘Ultimate Test’ are set. It starts with Saturday’s visit to Chelsea, a club with whom he shares such an intense history, and ends with an equally daunting trip to Manchester City.

Back United to beat Chelsea and Juventus at 20.00 with RedArmyBet*

In between, United welcome Cristiano Ronaldo and Juventus to Old Trafford, host Everton and travel to Bournemouth (who, at the time of writing are ahead of United in the table) before the return game against Italian football’s Old Lady in Turin.

The first assignment takes place in such familiar climes. Mourinho will travel to Stamford Bridge on Saturday lunchtime knowing that a defeat would greatly intensify the pressure on him.

He will also travel to Chelsea on Saturday knowing that the odds are stacked against him. His three previous trips to Stamford Bridge as United manager (twice in the league, once in the FA Cup) produced three defeats, with six goals conceded and none scored. The most recent meeting, in May, came on neutral ground – Wembley Stadium – but it was familiar despair for Mourinho as Chelsea clinched the FA Cup.

While previous encounters may be a minor footnote to the narrative, the current landscape bears much greater significance. After just eight games, Chelsea are already seven points better off than United, sitting second after winning six and drawing two.

Mourinho has never faced Maurizio Sarri but he will know what to expect. The Italian’s Blues will pose a formidable threat. This season, they have dominated the ball and created chances freely. Under Sarri, they have averaged 67 per cent possession, increasing their average duration in possession from last season by almost five seconds to 16.58.

They have also substantially increased their xG from 1.4 per match last season to 2.35 this, while also decreasing their open-play goal conceded-to-xG conceded ratio from 1.1 to 0.54 goals per xG conceded. 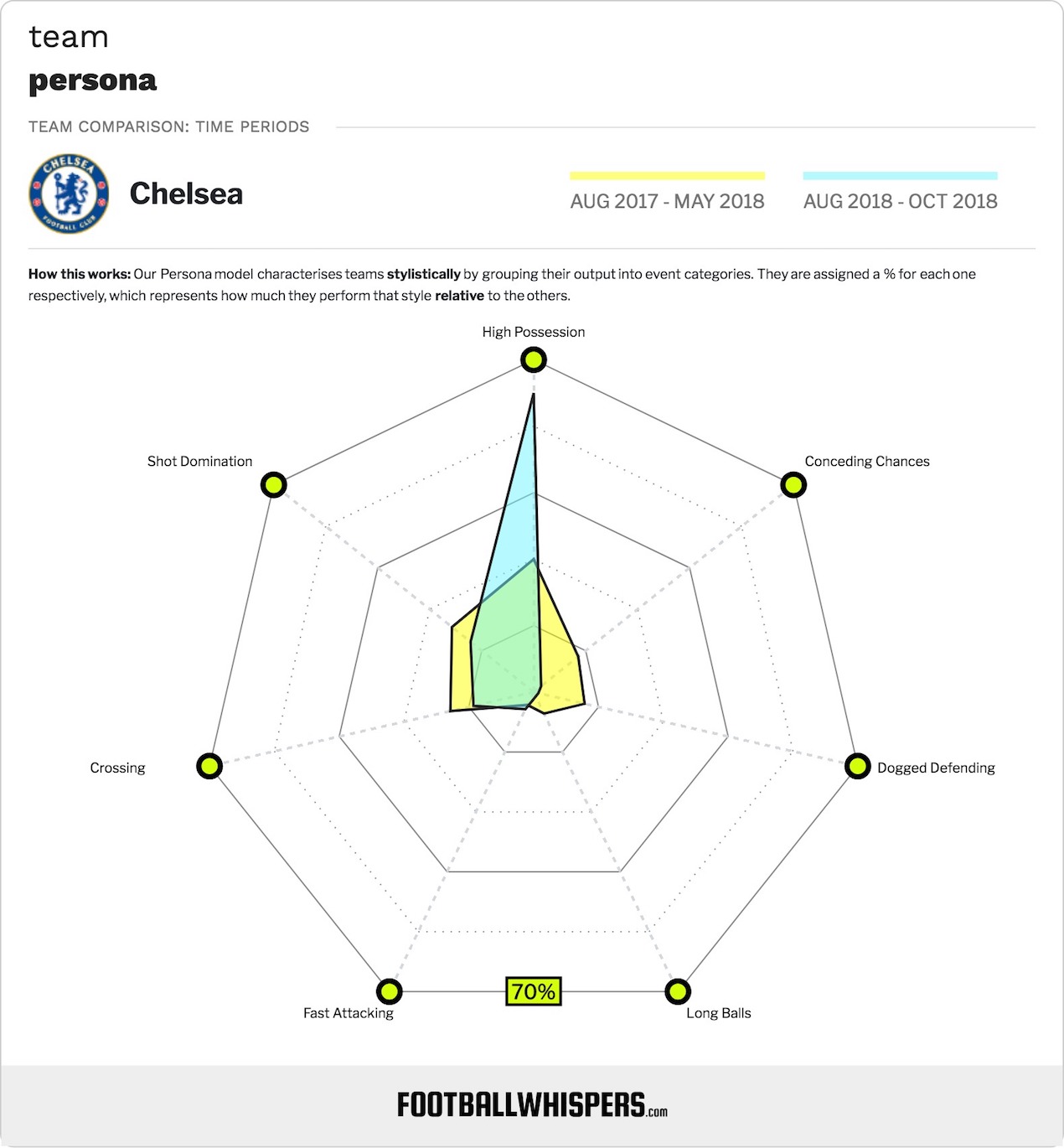 In other words, they have improved going forward and tightened up at the back. Contrast that to United’s shoddy defensive record, with 14 goals conceded from an expected 13, and the scale of the task facing Mourinho becomes clearer.

Whereas in the past Mourinho has been able to rely on a sturdy defence (last season, United kept a league-best 19 clean sheets), lately cracks have begun to appear in the back-line. Although the second-half comeback to down Newcastle was stirring, Mourinho will have been aghast at the ease with which the Magpies sliced through United’s back four to score twice in the opening ten minutes at Old Trafford.

It prompted Mourinho into drastic action, hooking off Eric Bailly before the 20-minute mark to shift Scott McTominay into central defence. 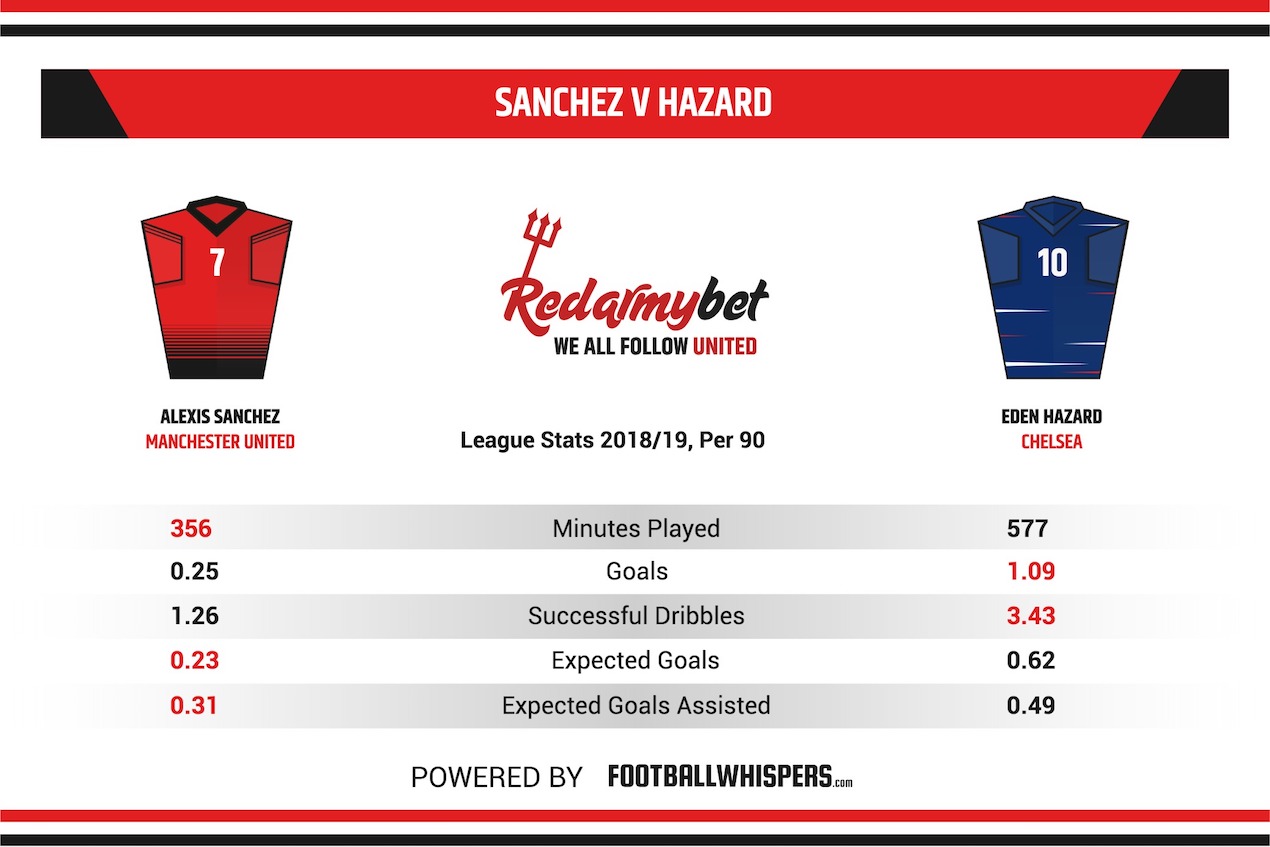 Indeed, considering how Brighton, West Ham and Newcastle laid bare the defensive deficiencies of this current United crop, Mourinho could perhaps be excused for fearing what an in-form Eden Hazard may do to a group of players who have seemed alarmingly uncertain when faced with movement in and around the box this season.

With the likelihood of Mourinho sticking to a 4-3-3, United’s best bet will come from attacking down the wings. In Chelsea’s last game – a 3-0 win over Southampton – Sarri’s 4-3-3 saw Hazard on the left flank with Ross Barkley and Marcos Alonso. While Cedric Soares and Manolo Gabbiadini may not have been able to expose that trio’s defensive negligence, United have the firepower to find joy on the wing, especially through Marcus Rashford.

United average the most crosses of any Premier League team with 24.5 per 90 minutes. With Romelu Lukaku expected to lead the attack once more, expect a similar strategy from Mourinho’s men. The Belgian striker has not found the net in any of his last six United outings but is fresh from a brace on international duty.

Perhaps Mourinho’s biggest concern is Nemanja Matic. The Serbian midfielder is a doubt after picking up a back injury during international duty. With Marouane Fellaini also doubtful for Saturday’s game, it could hand Andreas Pereira a huge opportunity to impress. The 22-year-old has not started since enduring a difficult 45 minutes against Brighton in August, but Mourinho may feel the midfielder’s lack of competitive action recently makes him a gamble for a game of this magnitude.

If the Brazilian is not given the nod, his compatriot Fred will be as equally keen to impress. The £52million summer signing has not started since September 22 and, although he scored on his last start, the 25-year-old needs to start repaying the club’s investment.

The stats would appear to suggest that United’s chances against Chelsea are bleak. In truth, they are, but then again it would be foolish to underestimate Mourinho’s resilience. Now well into his third year in Manchester, it’s not a reach to suggest that the trip to Chelsea begins the most important period of his time in the United dugout. To ease the pressure, he must do what he hasn’t been able to do since March  2010; win at Stamford Bridge as an opposing manager.