RedArmyBet brings you a double bet ahead of the Europa League semi-final first leg which sees Arsenal travel Valencia and Chelsea host Frankfurt.

Valencia will be disappointed that they failed to capitalize on their early goal at the Emirates in the first leg, as they were eventually downed 3-1 by Arsenal. However, they have since come out to thrash and relegate Huesca 6-2 at the weekend and look to have given their visitors a serious message of their intentions ahead of this second leg.

By contrast, the Gunners were thoroughly disappointing in their Sunday match, hosting a poor Brighton side, as they could only manage a draw. That now means that the only realistic way that they can compete in the Champions League next season is by winning this tournament.

It has been yet another dominant season for the hosts at the Mestalla, losing just three times from their 28 matches, and just once in their last 21.

That is an exceptional record, especially with one of those defeats coming at the hands of Juventus in the Champions League back in September, while they’ve beaten the likes of Real Madrid and held Barcelona and Atletico.

Moreover, they now have seven wins from their last nine here and given English sides have lost 17 of 22 trips to Spanish sides in the European knockout stages since 2009/10, winning only once, the Gunners look worth opposing.

The visitors have lost a woeful nine of their last 15 away days since mid-December, only beating League One outfit Blackpool, the relegated Huddersfield, a 10-man Watford and a well off the pace Napoli side.

Furthermore, teams that have been beaten by an exact two-goal margin in their opening leg on the road in the Europa League have a good record in return fixtures, winning nine of their 12 such matches since 2016/17.

Pedro put Chelsea in control of this tie following his clinical effort just before the half-time break to level the scores in the first leg. They’ve followed that up with a convincing 3-0 win in the Premier League hosting Watford, guaranteeing themselves Champions League football next season in the process.

In fact, the Blues have only been beaten twice on home turf all season, winning seven of nine matches at Stamford Bridge since they last tasted defeat there, while also keeping six clean sheets.

Moreover, eight of their last nine wins here have seen them win by at least two strikes, while six of them saw them win by three or more.

Frankfurt have struggled for results of late as they’re without a win in four matches across all competitions now, while they’re just W1-D3-L3 over their past seven outings, conceding at least three times in each defeat.

They look like a side worth capitalising on in the goalscoring markets given they’ve also lost two of their last three winless games on the road, as Benfica beat them 4-2 last month, while their most recent outing last weekend saw Leverkusen take them to the cleaners, running out 6-1 victors – albeit with star striker Luka Jovic rested.

The likely man to register for Maurizio Sarri is the French World Cup winner Olivier Giroud, who leads the goalscoring charts for the 2018/19 Europa League with 10 goals from as many games since the start of November.

He’s likely to get the nod to start and so we’d be very surprised to not see him register on the board, in what could be a high-scoring encounter. 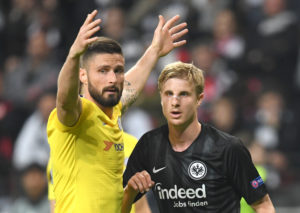