We break down the key battle ahead of United's trip to Goodison Park.

Although few predicted any other outcome, Manchester United’s defeat to Barcelona in the second leg of their Champions League quarter-final tie at the Nou Camp on Tuesday night stung.

But Ole Gunnar Solskjaer’s men must put their disappointment to one side and refocus on Premier League matters. The Red Devils have a fight on their hands in the remaining games of the season to make it into the top four and book a place back in the Champions League next term.

And that will require a return to form and a positive result when they travel to Goodison Park to face Everton on Sunday afternoon.

Key to United’s hopes of achieving just that will be getting the best out of Paul Pogba, while shackling Everton’s own goal-scoring midfielder, Gylfi Sigurdsson. 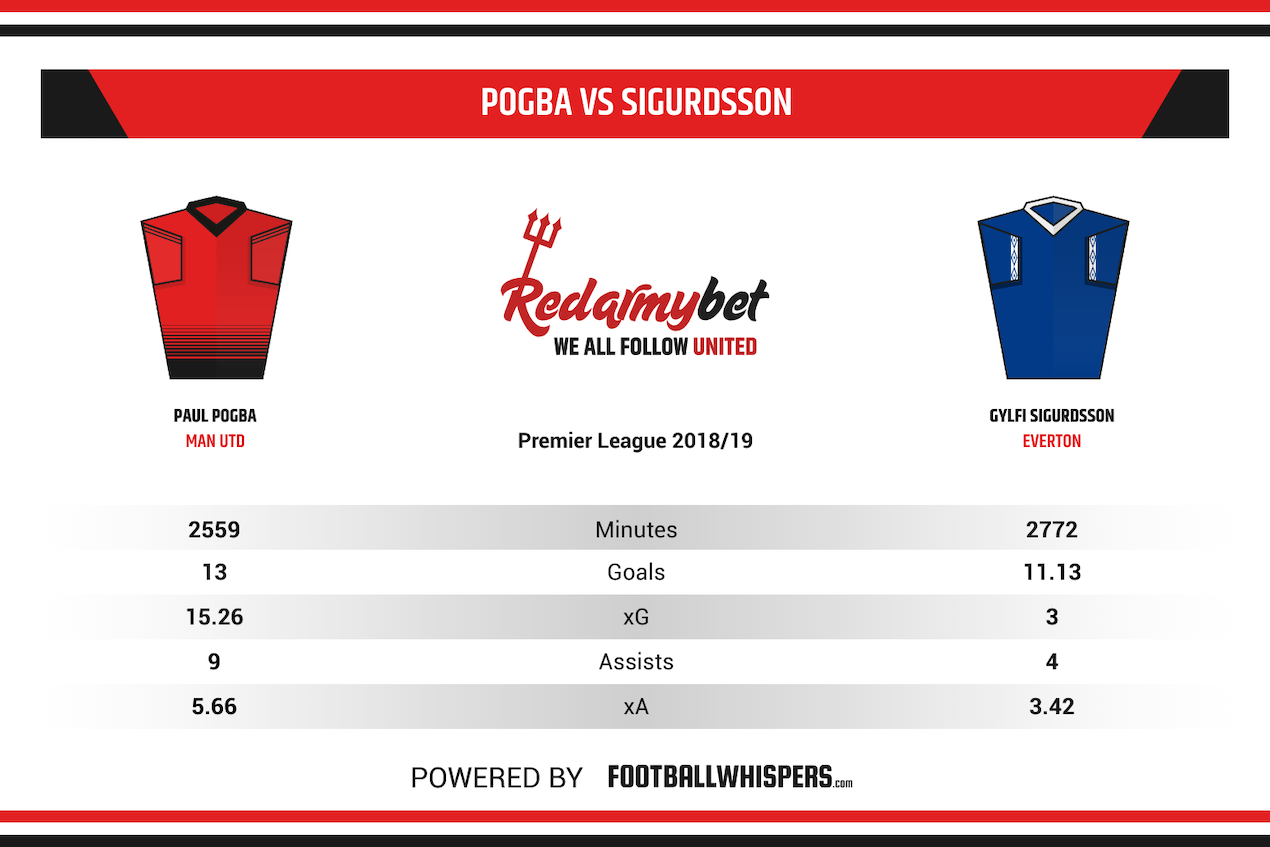 Like United in general, Pogba’s early form under Solskjaer was exceptional, seeing the Frenchman score nine goals and register six assists in his first 12 appearances after the Norwegian took charge in late December.

But then came a dry spell. Pogba failed to score in his next eight appearances for United, providing just one assist in that time.

The main positive from last weekend’s unconvincing 2-1 victory over West Ham United at Old Trafford, aside from the three points, was that Pogba rediscovered his shooting boots, scoring twice from the penalty spot to take his tally of Premier League goals this season to 13, the highest league return of his career.

The 26-year-old also has nine Premier League assists to his name this term, just three shy of his best creative season with former club Juventus.

Although recent performances have shown that he remains inconsistent, Pogba has played better and been more productive under Solskjaer than at any point during his first two and a half seasons back at Old Trafford when Jose Mourinho was in charge.

The changes Solskjaer has made to Pogba’s role in the team have been subtle, with his playing position remaining mostly unchanged, but with the United No.6 allowed more freedom to join the attack, and given the confidence to try the tricks, elaborate passes and improvised shots that, when they come off, showcase what a special talent the midfielder is.

But Everton have a special midfield talent of their own in Sigurdsson, albeit one a little less flamboyant and eye-catching than the dazzling Pogba. 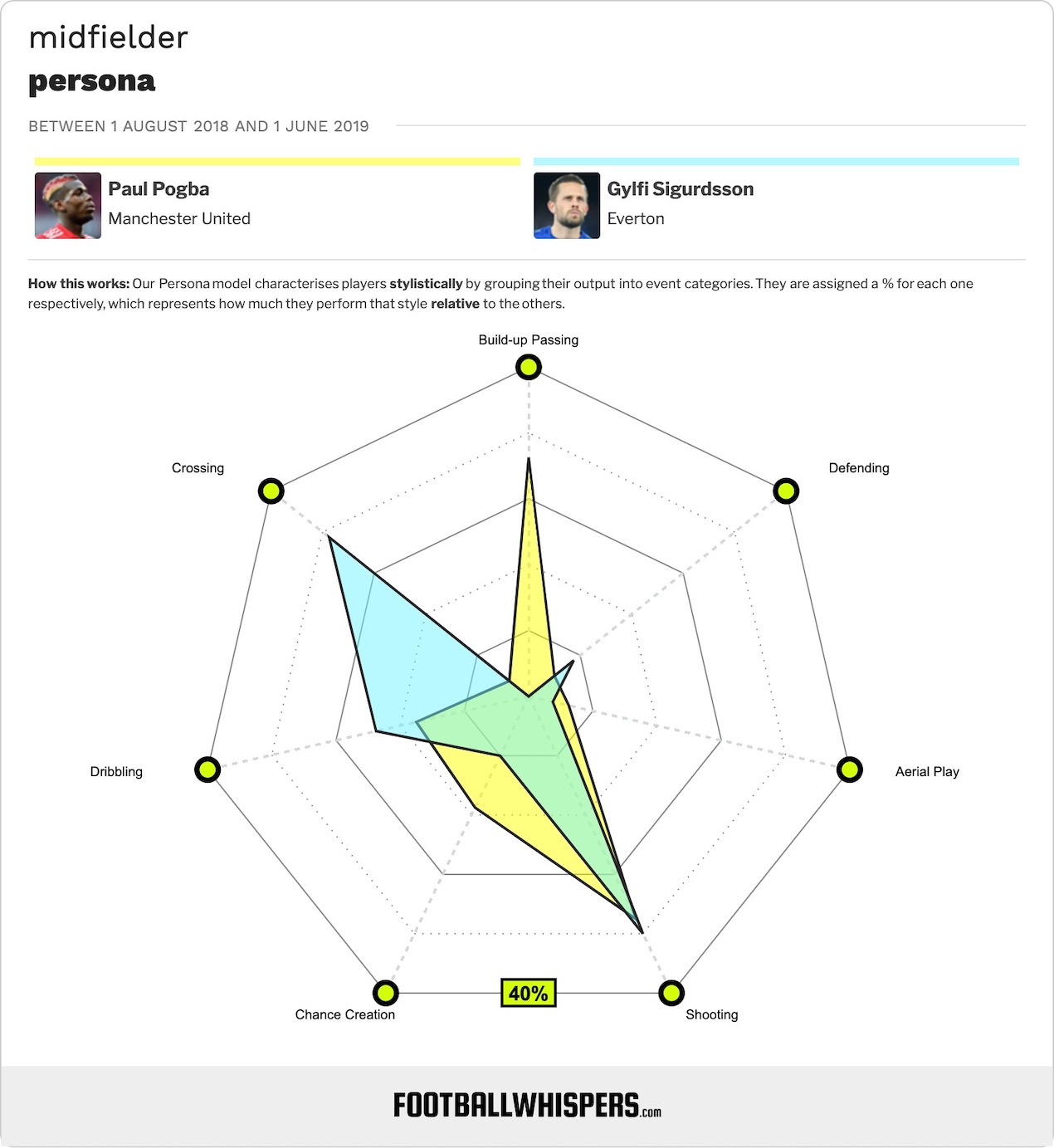 Eyebrows were raised when the Toffees forked out a club-record fee close to £50million to sign the Icelandic star from Swansea City the summer before last, but his ability to consistently deliver goals from midfield has proven him well worth the investment.

Sigurdsson is just one goal behind Pogba in the Premier League this term, having found the net an impressive 12 times for Marco Silva’s side.

Although he is not as prolific a creator as the French superstar, having registered just four assists to Pogba’s nine, he is more active in his defensive duties, completing more tackles (1.1 to 0.91) per 90 minutes and making more interceptions (0.77 to 0.59).

And, when you consider seven of Pogba’s goals this season have come from the penalty spot, compared to just two of the Everton man’s, Sigurdsson is actually more of a goal threat from open play.

After facing the mighty Barcelona and an all-star front three of Lionel Messi, Luis Suarez and Philippe Coutinho on Tuesday night, United’s task on Sunday, on paper, is less daunting. They will have to keep Sigurdsson under control, though, if they are to claim a vital three points in the top-four race.

Could Russia 2018 be Africa’s Time to Shine?