Since the euphoric comeback over PSG we’ve lost five of seven matches, which includes all four road trips in this time as the only successes came in unpersuasive 2-1 wins over Watford and West Ham at Old Trafford.

That is poor, but a record of six wins from eight meetings with the Toffees across all tournaments since 2015/16 offers encouragement that the run can be broken at Goodison Park.

Marco Silva’s men may have just recorded two wins from three unbeaten matches with ‘Big Six’ sides over the past five weeks, though they’ve often produced stalemates in Merseyside derbies, while both Chelsea and Arsenal have been in dire straits away from home.

Everton had lost 14 of 19 matches with the ‘Big Six’ going back to the beginning of last term prior to those results, and a 2-0 defeat to relegated Fulham last weekend suggests they might not be on the upwards curve as some might think.

Ole Gunnar Solskjaer hasn’t been consistent in the formations he selects, though this isn’t necessarily a stinging criticism. He was also chopping and changing depending on the opponent and the availability of his own players during the winning run at the start of his tenure.

However, we’ve looked most solid in a 4-2-3-1 where Paul Pogba has less defending to do (he lacks the concentration to pick up his man and can be caught in possession too often still), or in a 4-3-3 where Pogba is stationed on the left of the midfield trident (a role he was accustomed to in his successful spell at Juve).

However, either way we’d expect Nemanja Mata to come back into the side as Everton’s Gylfi Sigurdsson will need nullifying – preventing the Iceland international from strutting his stuff should be key to disrupting Everton’s rhythm. 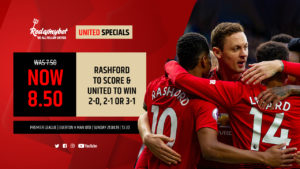 Luke Shaw remains suspended while Ander Herrera, Eric Bailly and Antonio Valencia are still out injured, though beyond that Solskjaer has virtually a full complement to choose from. The real question will be whether he continues to show faith in those picked midweek or will he transition to those he feels he can trust for next season.

Shaw’s absence should ensure Ashley Young gets another game, though we’d expect Diego Dalot to come in at right-back.

Solskjaer opted to use Victor Lindelof there against Barcelona and though he didn’t fail miserably in the role, with the mistakes coming from other quarters, surely the Swede should be a permanent fixture in the centre.

If there’s a lack of available full-backs, Chris Smalling – who played there frequently in his younger years – should be shunted out wide instead until a better solution can be found over the summer.

Anthony Martial and in particular Marcus Rashford looked alive in the early stages against Barcelona, though they were starved of any service after Lionel Messi took the lead for the Catalans.

Rashford actually hit the bar within 40 seconds, though he’s yet to score against the Toffees and it is Martial that interests us most in the goalscorer markets.

The Frenchman has five goals and two assists in his past six appearances against them, even scoring in one of these where he came on for just two minutes at the end.

Everton like to do a fair bit of attacking down the wings and Martial can benefit from the vacated space left in behind, and with the Toffees sometimes struggling to defend against through balls, we certainly wouldn’t be surprised if Pogba registers an assist to him here.