Ahead of United's trip to Wembley we tell you everything you need to know about the opposition.

Spurs were always going to be tough opponents given their quality and form these days, but they’re also heading in the right direction in the treatment room.

Jan Vertonghen, Eric Dier and Moussa Dembele are all back in training, though the latter looks to be on his way to China and has probably played his last game for Spurs anyway.

The other two should help shore Spurs up at the back, with Vertonghen the closest to the squad, though Mauricio Pochettino will likely persist with Davinson Sanchez and Toby Alderweireld in any case just at the moment.

He could potentially also have Lucas Moura back after he missed the 1-0 win over Chelsea, though the Brazilian probably wouldn’t have started anyway with the underrated and highly consistent Heung-min Son in such fine fettle.

Harry Kane may be the headline attraction for Spurs and the man they depend upon more than anyone else, but he’s hardly the only menace they have going forwards and others have stepped up to improve their output on previous seasons.

Christian Eriksen has bagged himself four goals and five assists in his last nine league appearances, though he’s only managed assists (five) rather than goals (zero) against ‘Big Six’ teams across all competitions this term, with Heung-min Son the one who piques our interest in the goalscoring markets.

This will be the South Koreans’ last game before jetting off for yet more international duty, and he’s become increasing important for the hosts and has gone from scoring once every few games across the past two seasons, to netting once every two in the current campaign.

He even had a slow start after returning from the Asian games, but since late October he’s bagged 12 goals and seven assists in just 12 domestic matches in which he’s started.

That includes strikes against ‘Big Six’ outfits Chelsea and Arsenal as he hasn’t merely been a flat-track bully and looks a decent shout to get on the scoresheet they way Spurs have attacked recently. 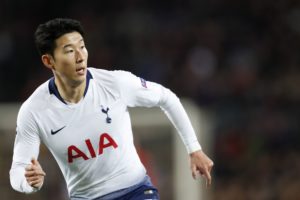 Could Heung-Min Son get a goal against the Reds?

Heung-min Son’s move closer to goal this season has seen Spurs often use a 4-3-1-2 formation with Dele Alli behind him and Harry Kane.

Christian Eriksen is of course another guaranteed starter, but it should mean Harry Winks and Moussa Sissoko will be the weak links in midfield.

They’ll be occupying the kind of space Paul Pogba likes to operate in and given the French World Cup winner has seemingly recovered from a minor knock to take part, he could be crucial in our efforts to disrupt Spurs’ rhythm in the engine room.

Which former United player would most improve the current squad?