Preview, betting tips and enhanced odds for Manchester United's opposition as they face Chelsea in the fifth round of the FA Cup.

Eden Hazard may not seemingly have the best relationship with his manager, but while the two haven’t always seen eye to eye, he of course remains the star attraction for Maurizio Sarri’s side.

He was one of those that started on the bench midweek in their Europa League trip to Malmo as he was rested, while there have been encouraging signs of link-up play with Gonzalo Higuain, who is far better with his back to goal than the discarded Alvaro Morata.

Hazard has netted five times against us in 17 matches throughout his time at Chelsea (the most he’s ever scored against a single team in his career is seven), and domestic cup competitions seem to bring the best out of the Belgian as he’s netted three goals in five appearances.

In fact, he’s averaged either a goal or an assist every 83 minutes in either the FA Cup or League Cup facing anyone since 2015/16, and may well fancy himself once more up against a diligent, but not specialist right-back in Ashley Young.

Much of the focus on Chelsea tactically at the moment has centred around the roles of Jorginho and N’Golo Kante, but aside from the midfield conundrum, another weak link has emerged in the shape of left-back Marcos Alonso.

The Spaniard arrived at Stamford Bridge in 2016 and enjoyed the best spell of his career under Antonio Conte, with the extra protection afforded to him in the wing-back system masking some of his defensive frailties.

The latest example came in the 6-0 hiding the Blues were handed by Man City, with Sarri’s team looking okay for the first four minutes before his mistake in failing to mark Bernardo Silva played a role in the build-up to the first goal that opened the floodgates.

Juan Mata will likely be his direct opponent here, and though the ex-Chelsea player doesn’t possess much pace, he has the subtlety to exploit the positional weakness of his fellow countryman. 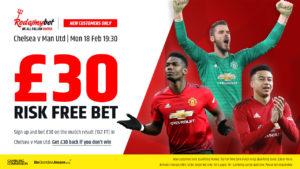 Will youth get a chance?

Whereas Solskjaer has been happy to give youth a chance and has afforded opportunities to Tahith Chong and Angel Gomes, the path to the first team at Chelsea is a notoriously difficult bridge to cross.

Callum Hudson-Odoi was denied a January switch to Bayern despite handing in a transfer request, but it remains the case that the talented youngster is still struggling for game time.

He didn’t even make the squad against Bournemouth or City, received just 13 minutes versus Huddersfield, while he was handed a six-minute cameo in Malmo and he must be wondering what he has to do to get a chance.

He has however played every minute of Chelsea’s FA Cup run to date, producing two assists against Nottingham Forest and a goal versus Sheffield Wednesday, and he’ll rightly feel aggrieved if he’s denied another opportunity to showcase his talents here.

What can Mourinho learn from Southgate’s approach to England?