Ole's at the wheel, but can he be the permanent United driver?

“If he loses at Spurs, the trip to Wembley will be the real test, it’s all well and good beating the likes of Cardiff and Huddersfield but we’ll see how he fares when he comes up against a top team.” What are we going to do now that with one hard-fought well earned victory Ole Gunnar Solskjaer has silenced almost all of his doubters? While a few weeks ago it seemed that Ole was simply keeping the hot seat warm, now it would take a brave or extremely foolish man to replace him, although considering our board appointed David Moyes anything is possible at the Manchester United asylum.

United’s 1-0 win over Spurs has cemented the calls for Ole to be given the job on a permanent basis and while there’s plenty of tough tests ahead this season, at the current trajectory it’s looking increasingly likely the Baby-faced assassin could be calling the shots next season. In fact on the current trajectory it’s looking like Solskjaer could win the treble as a manager next season.

RedArmyBet are the only bookmakers committed to sharing 50% of net profits with United fans.

It’s easy to dismiss Solskjaer’s start to his United career it’s also easy not to get carried away, but forget that, let’s allow ourselves to full blown OTT and predict that the Reds can conquer the world with Ole at the wheel. After five years of uncertainty, frustration, baffling decisions, confusing tactics, negative football and the occasional trophy it now seems the club – albeit temporarily – is being managed by someone who understands what the fans want to see – not to mention how the players want to play.

United fans have been waxing lyrical about the Right One, and it seems if Ed Woodward actually made the logical decision for once and gave a Red legend who understands the club and is able to make the team competitive and pleasing to watch. 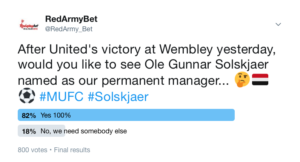 It doesn’t just take a Twitter poll to show us that United fans are desperate to see Ole being handed the role permanently, it’s fair to say the fans both home and away are revelling in his tenure so far with the Ole’s at the Wheel chant being sung louder and more passionately than any other.

Former United stalwart Darren Fletcher said of Ole getting the job permanently: “I would love to see it, he’s a Manchester United man, he’s got the club DNA in him, he was a massive player in Manchester United’s history. You see him bringing Sir Alex Ferguson back into the fold, it’s amazing what he’s done I just hope he continues it for the rest of the season, the bandwagon builds and he gets the Manchester United job.”

Fletcher’s view is one that’s being shared by thousands of Reds on social media:

The fans aren’t the only ones who want to see Ole being given a chance at the long term future of United, reports suggest the players are also keen to see the former striker being handed the job past this summer as he’s revitalised the dressing room.

Check out the latest odds at RedArmyBet for Jose Mourinho’s next permanent job.

Mauricio Pochettino allegedly remains top of United’s wish list, but with Spurs moving into their new stadium and Daniel Levy renowned for playing hard ball, it’s far from open and shut whether the former Southampton man will take the job.

The fans want him, the players want him, Ole wants the job, the question is does the board and Ed Woodward want him? Maybe the next few weeks will give us an idea of how difficult it will be to give it to someone else.

Solskjaer is 2.50 to be next permanent United manager with RedArmyBet.com

Check out the latest odds for United’s next permanent manager: HERE

Will Shaw get one last chance at United?