We take a look at the career of Nemanja Vidic to celebrate his birthday.

Beginning your football career as a teenager in constant fear of war and violence would have been a challenge for even the strongest of players.

Former Manchester United captain Nemanja Vidic, who turns 37 this weekend, had a fantastic eight years at Old Trafford, but his early life was a struggle having to live through the Yugoslav Wars whilst trying to build a career in football.

Nevertheless, throughout the trials and tribulations of his early years, Vidic created an impressive career for himself with United that ended with 300 appearances alongside five Premier League titles.

Vidic joined the Reds in the January transfer window in 2006 for just £7 million, despite the defender agreeing to join Fiorentina. 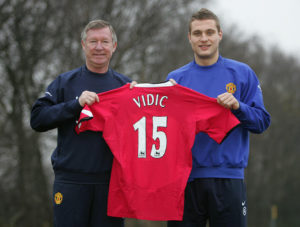 As the Italian side had to delay the transfer due to a lack of non-EU spots available in their squad, the Reds hijacked the transfer and Vidic made his debut at the end of January in a 2-1 win in the League Cup semi-final against Blackburn Rovers.

Just three weeks later, he gained his first major trophy in the same competition in which he made his debut, coming on as a substitute at the end of the game.

In the 2006/07 season, Vidic cemented a spot in the first team alongside Rio Ferdinand which became a vital partnership at the heart of the defence.

The two became known as being incredibly physical and difficult to break down, making it one of the most feared defensive partnerships in European football.

He ended his first full season with the Reds with a Premier League medal to show. 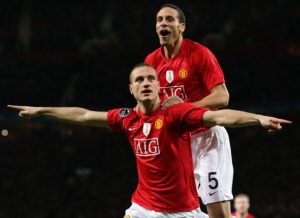 Vidic and Ferdinand had a long standing partnership in defence.

The following two seasons proved to be his most successful, signing a five-year contract in 2007 before securing a Champions League medal in 2008.

The Reds also managed to win three consecutive Premier League titles, which Vidic was an integral part of.

In the 2008/09 season, the Reds kept a record fourteen consecutive clean sheets as they went on to retain the title.

Vidic was shortlisted for the PFA Player of the Year award but lost out to team-mate Ryan Giggs.

After fighting off speculation about a transfer to Real Madrid, Vidic signed another new contract and was confirmed as the new club captain, succeeding Gary Neville.

At the end of the 2010/11 season, the Serbian’s goal propelled the Reds into securing a record 19th Premier League title, his first as captain.

Vidic suffered injury problems in the few years after, often being sidelined with issues to his knee, appearing just six times in 2011 season and missing eight weeks at the start of the 2012 season. 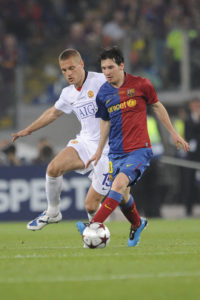 Vidic has played alongside some of the game’s greatest.

Overcoming his setbacks, he came back and captained the team to a 20th league title, finishing 11 points ahead of City in second place.

In his final season at Old Trafford, Vidic confirmed he would be leaving the club and England, stating that he couldn’t play for a side in England other than Manchester United.

In an interview with United, the Serbian said: “I’m not considering staying in England as the only club I ever wanted to play for here is Manchester United.”

In March of his last season, Vidic was sent off against Liverpool, his fourth red card against them, a record for any player against an opponent.

He played his last home match for the Reds against Hull City, in which he received numerous standing ovations.

Often being compared to Steve Bruce, due to his defensive style, Vidic was arguably the best defender in the world at his peak.

He formed a formidable partnership with Ferdinand but could play alongside any defender and produce a solid back line.

Critics say that the Reds haven’t been the same at the back since his departure four years ago, highlighting his importance within the squad for almost a decade.

Podcast: A Win Against Fulham, Valencia and Liverpool on the Horizon

Choccy’s Diary: Tough Times, Title Challenges and Being A Sweetie