Shaw one of the few bright spots for United this season

There is a certain irony to a player who held up as an example of Jose Mourinho’s apparent inability to work with young talent being one of few players to shine at Manchester United in a time of crisis for the manager.

As United have under-performed, the struggle for results and the behind-the-scenes transfer tumult has resulted in Mourinho showing visible signs of strains and frustration. Shaw has been a beacon of progress on the field.

Not just in terms of United as a club but to himself, and while there is a nagging feeling that, in reality, the Portuguese doesn’t rate him quite as highly as we think, the left-back position is his to lose, which just three months ago looked unlikely to say the least. To cap it all off, Shaw has been recalled by England boss Gareth Southgate to face Spain and Switzerland, almost 18 months after his last cap.

Our friends at Football Whispers ask whether Shaw has finally arrived United or whether this is another false dawn.

Shaw was signed by Manchester United in 2014 by David Moyes. But four years down the line we’re still not really sure of him as a Manchester United player. He was supposed to develop into a star, English football’s next great left-back continuing the lineage of Kenny Sansom, Stuart Pearce and Ashley Cole.

But through his own lack of self-discipline – Shaw’s shape and fitness have frequently been questioned – ill-timed injuries and the overall distrust of Mourinho, his body of work in a red shirt has been minimal to say the least.

By now he should be approaching 200 appearances; his three starts this season have only just ensured he’s exceeded his 67 matches as a Southampton player in his teens.

His final season on the south coast saw him named in the PFA Team of the Year as an aggressive and skilful full-back with bursts of energy down the touchline, but also a defensive awareness of what lay behind.

United was supposed to continual his natural progression and develop from an outstanding prospect into a genuinely world class full-back. He’d have to grow up fast, but maybe he wasn’t ready for it.

Because while hindsight is a wonderful thing, and Shaw himself will probably put it down to bad fortune rather than anything else, it was the wrong move at the wrong time. 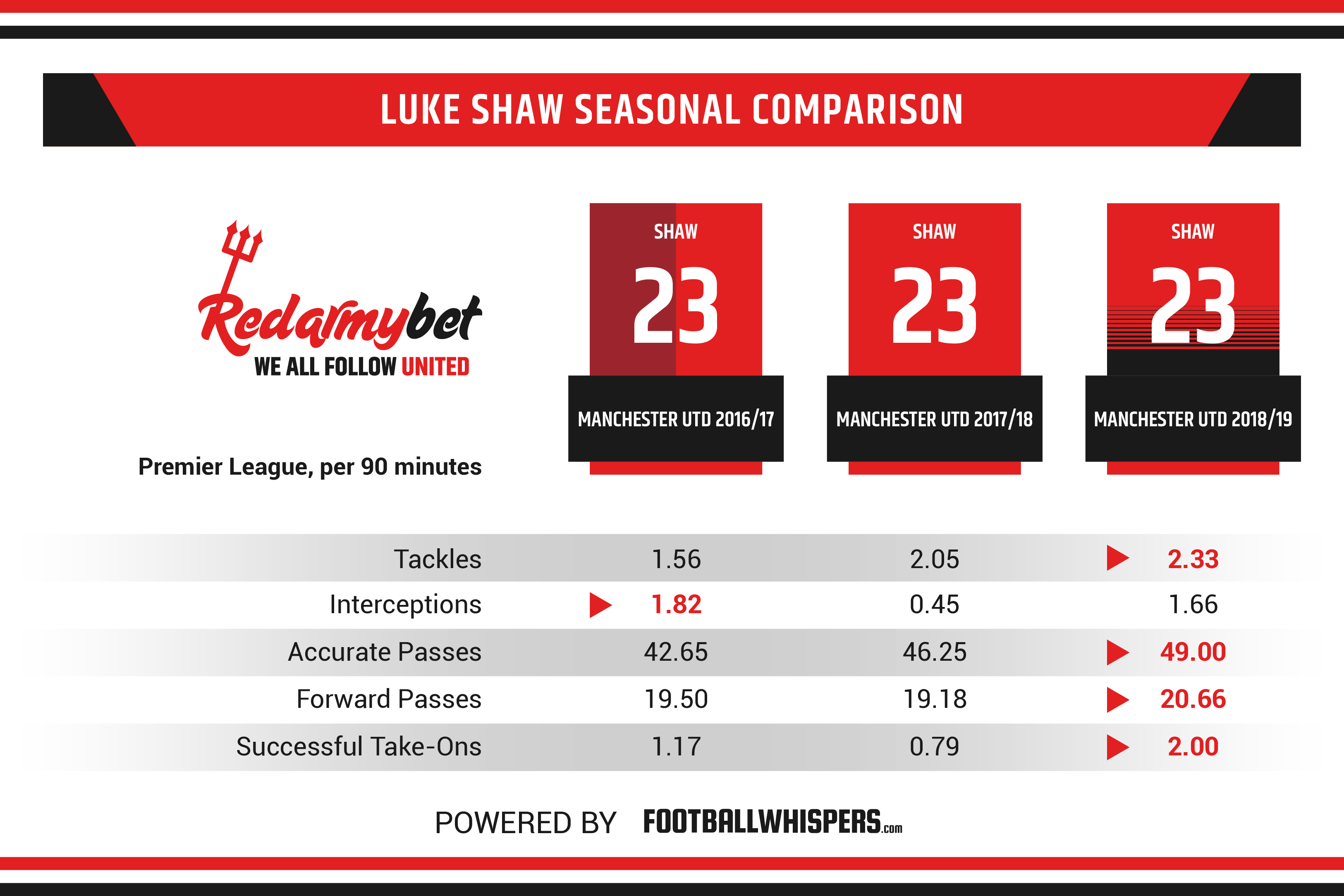 He needed at least another campaign at St Mary’s in familiar surroundings where he could grow as a human being as much as a footballer. United was too big a jump and perhaps alarm bells should have rung when it was claimed the reason Chelsea pulled out of a deal was because of his wage demands.

As a nice means of squaring a circle, the Chelsea manager who contributed in vetoing that decision was Mourinho who said at the time: “If we pay to a 19-year-old boy what we were being asked for, to sign Luke Shaw, we are dead. We would have killed our stability with financial fair play and killed the stability in our dressing room.”

Since his arrival at Old Trafford you’d have been forgiven for thinking Mourinho was still punishing Shaw, such is the level of criticism directed at the 23-year-old with each slight misstep on the field.

Last season Shaw became something of a scapegoat for United’s inefficiencies to the extent his confidence looked shot and a move away the most logical option before it was too late to salvage all that promise.

But extensive fitness work over the summer, Ashley Young’s contribution at the World Cup and United’s strange behaviour in the transfer window has conspired to make him first choice again and so far he’s impressed.

There was a confident display against Leicester culminating in his first senior goal and in the horrorshow at Brighton he was one of the few United players to emerge with any real credit.

While the 3-0 defeat to Tottenham won’t be remembered with any fondness, other than its potential symbolism given Mourinho’s future, it was telling that Shaw was one of the players who spoke to the media after the game.

Granted, players are obligated to do so but, in the circumstances, and because of his often-fractured relationship with Mourinho, he could have easily turned it down. But there he was, showing a degree of accountability and leadership, however facile it may have seemed to fans. 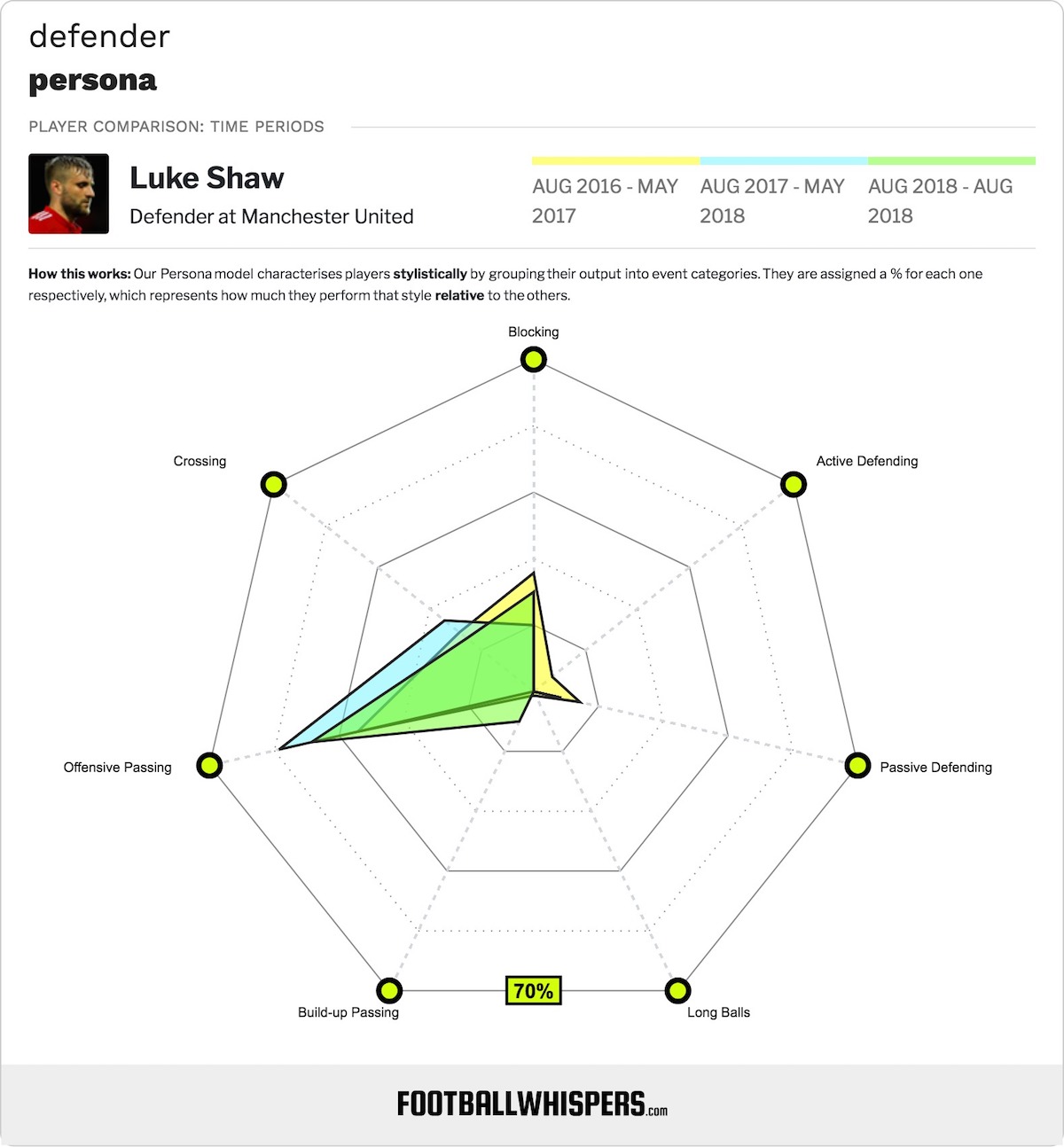 That alone is progress and a sign that, for all the misery around the club, Shaw is feeling comfortable and a fully-fledged representative of the first-team, rather than an individual passing through from time to time.

It remains to be seen how his form continues and character stands up in what are sure to be stormy waters ahead but his numbers have been good.

Amongst Premier League full-backs he ranks third for successful take-ons per 90 minutes (2.0), seventh for open play key passes (1.33) and eighth for accurate passes per game (49.0). Defensively, he’s 22nd for tackles per game (2.33) and 15th for interceptions (1.66) but that is emblematic of the United side as a whole.

What’s notable is that all the above metrics are considerable improvements on his stats from last season; in 2017/18 he averaged 0.79 takes-ons, 0.91 open play key passes, 46.0 accurate passes, 2.05 tackles and 0.45 interceptions.

We are only three games down the line but that rise in production is a degree of proof that Shaw is progressing. Staying fit, focused and delivering consistency is key, something that will be even more admirable if it’s achieved against the backdrop of the current issues.

To further indicate the change, Mourinho is even starting to say nice things about him. Speaking after the Spurs loss, he said: “I was particularly pleased. I told him you cannot play better than you did.

“Of course, he is upset with the result, the kid has to be, but the kid has to know that he has had three very good matches in the Premier League and today he was very good. I am very happy with him.”

VIDEO: 5 players with a point to prove vs Spurs