The United duo could be useful for Gareth Southgate.

Manchester United’s season may not be going to plan, but the performance of two homegrown youngsters is a reason to be cheerful.

Marcus Rashford and Jesse Lingard have both shown their worth for United (even if they’re struggling for club form at the moment) and can be part of England’s great future going forward.

Our friends at Football Whispers are here to look at how the Three Lions could get the best out of the United pair.

Lingard’s taste for scoring great goals at Wembley has now carried over into his England career. He scored in three straight Wembley appearances for United in 2016 and 2017, netting in the FA Cup final, Community Shield, and EFL Cup final, and his strike against the USA is just another on the list.

The goal, and a lot of his performance in the ‘Wayne Rooney Foundation International’, showed what he’s best at: finding space.

Just before receiving the ball from Dele Alli, Lingard shifted back by a yard or so on the edge of the box. He didn’t need to in order to be able to receive the ball, but the space was there and it meant he could get the ball under his spell before anyone would be able to close him down.

It’s that that meant he was able to let the ball roll across to his right foot perfectly, and that he had the space — physical and mental — to be able to pick his spot with a beautiful curling strike.

He was making runs in behind the American defence throughout his hour on the pitch, before he was substituted just before the hour-mark, stretching the opposition and giving England an option when they looked like possession might be going stale.

It might sound odd to say, but Lingard is probably the England player who most deserves a free role in the team. He might not be the most skilful player that England have, but he’s probably the one who understands space the best.

A free role would get the best out of him by letting him balance the team however is needed, whether that’s making runs in behind, or by holding a position out wide, or drifting into pockets of space in the middle. England have good enough players to make up for Lingard’s occasional lack of passing ability, and he can help bring the best out of them.

What to do with Rashford?

Rashford is a harder player to fit into the side, as there is an elite player in both of the positions in which he usually plays. Harry Kane is the main striker while Raheem Sterling is the first-choice left-sided forward.

The United forward clearly has a lot of quality, but it’s been a struggle to find a role that gets the most out of his skillset.

In the league this season, he’s been neither striker nor creator nor a defensive attacker (like Roberto Firmino, for example), but has been small bits of each.

Last season, when he notched up seven league goals and five assists, he was averaging 3.08 shots per 90 minutes, over double what he’s managing now.

It’s not just the gap between this season and last that shows Rashford still hasn’t found the role for him. Looking at the Football Whispers persona radar, which looks at a team or person’s playing style, we can see that the forward has looked like a completely different player over each of the past three seasons. 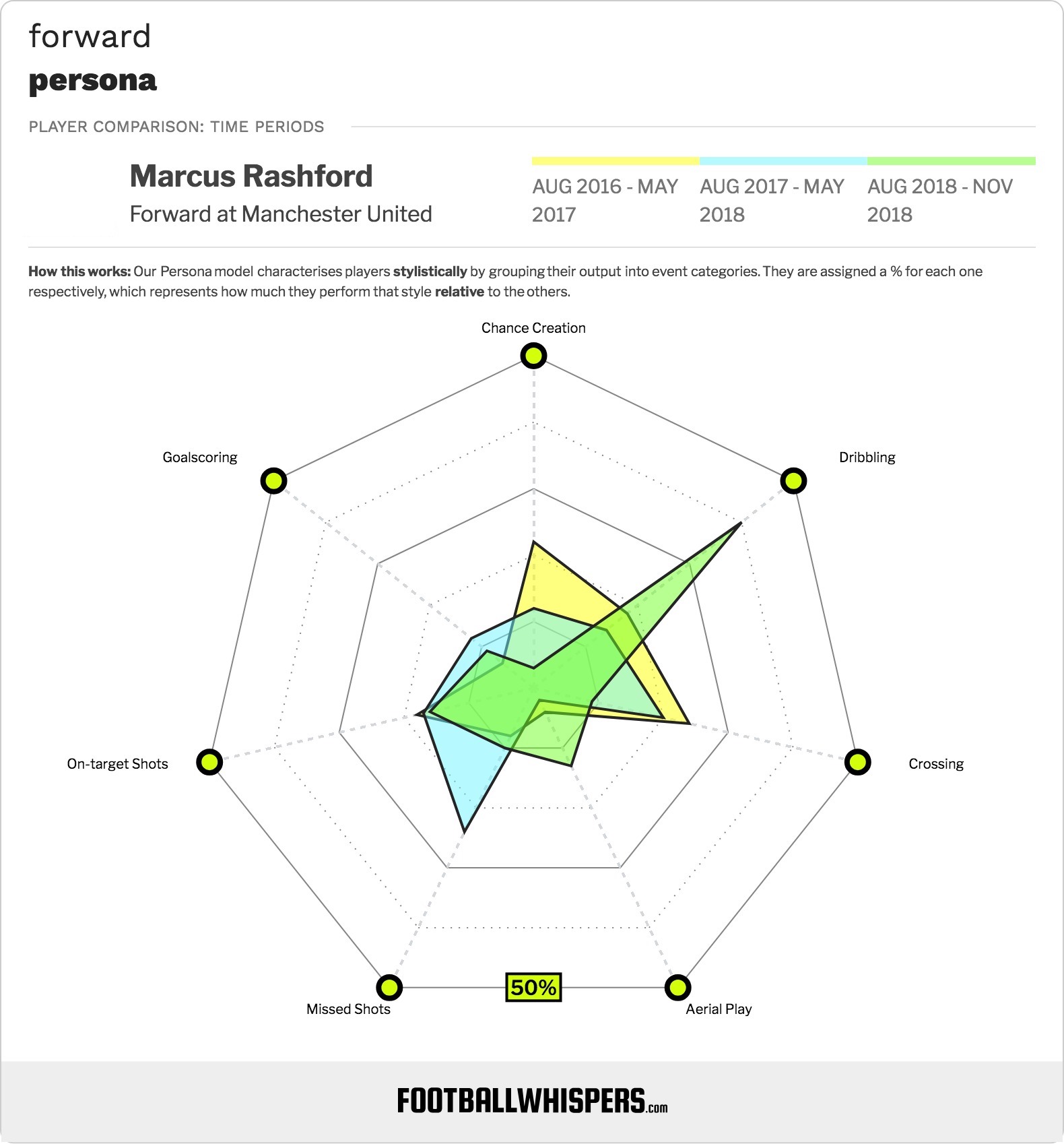 Where would his best role be for England? Is he a similar Swiss army knife-type to Lingard? Maybe. But he’s only just turned 21, and is just a couple of months shy of being a full five years younger than his United team-mate.