How United can bridge the gap to the top four

Top four is still on the cards, but improvements might need to be made...

The start of Ole Gunnar Solskjaer’s reign as interim manager has been so successful, with five wins out of five, that the Red Devils can start to think seriously about making the top four again.

Under Jose Mourinho, it had started to look like Champions League football next season wasn’t going to happen, or at least that United would have to win the whole competition in order to qualify.

There are only six points between Manchester United and fourth place, and the signs are that Solskjaer has the team moving in the right direction. To help him out, we’ve presented four things he can do to help bridge the gap.

Tighten up the defence

United’s attack has looked revitalised under Solskjaer, which is no surprise. According to The Mirror’s sources: “Solskjaer’s instructions are for attacking players to play with freedom and express themselves, without being burdened by defensive obligations”.

This is fine for the attacking output of the team, and has seen the side score 16 in five games, but unburdening the attackers from defensive responsibilities might not be the best thing to do in the long-term.

Unsurprisingly, Manchester United’s underlying statistics have improved under the Norwegian — this isn’t just unsurprising because of the change of manager, but because of the strength of opposition.

However, the team have still been conceding chances worth 1.07 expected goals per game in the league. Their opponents have been Cardiff, Huddersfield, Bournemouth, and Newcastle. There’s only one of these teams who United should even entertain the idea of conceding more than 1.0 expected goals against (Bournemouth), the rest should have posed minimal threat.

If this is how the defence has fared against low-quality opposition, then there might be trouble when better opponents start coming around more regularly. At some point, this is going to have to be addressed.

United drew their first league games of the season against Chelsea and Arsenal, but if they want to reach the top four then they’ll need to take everything from these six-pointers. 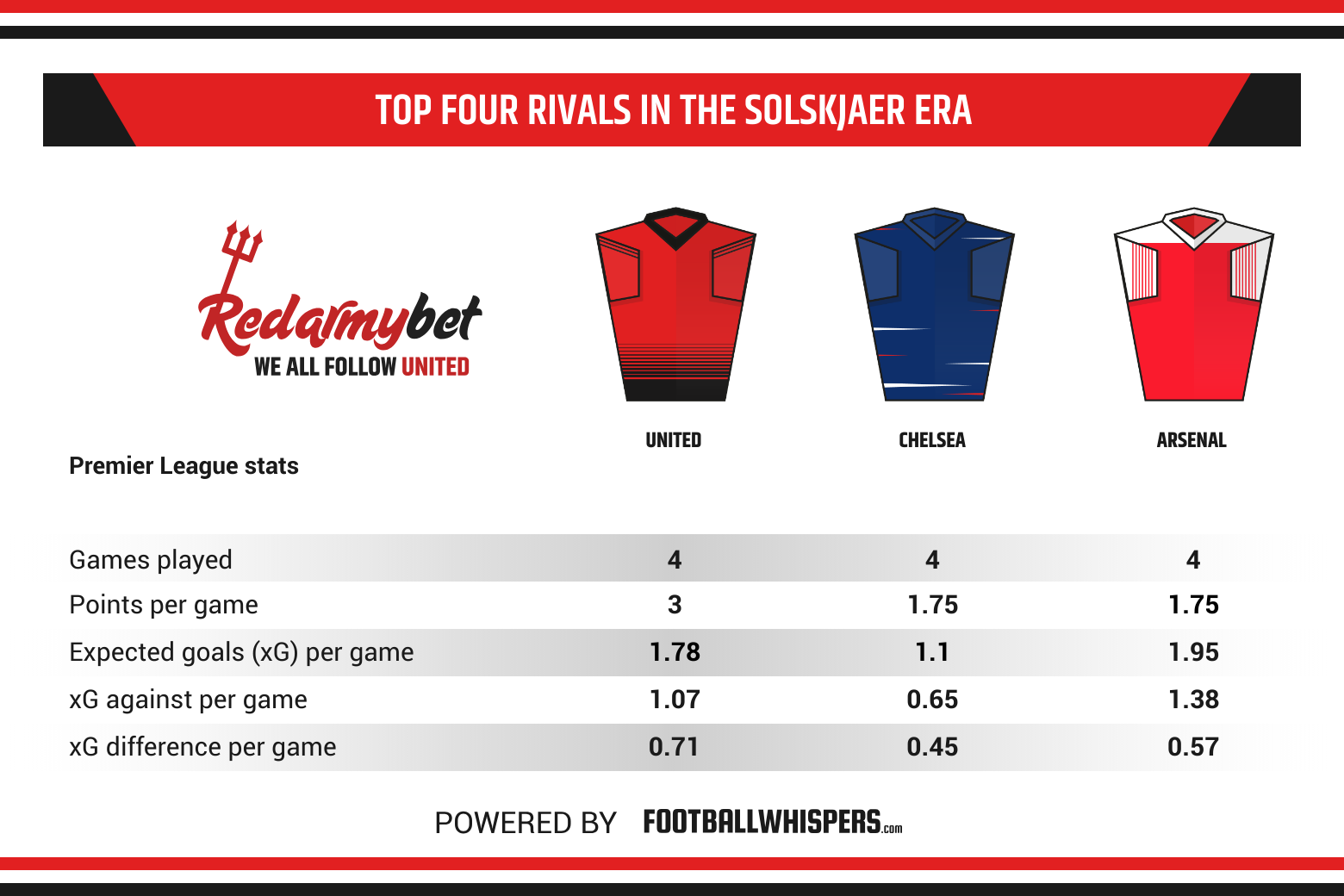 The trip to the Emirates is away from home, but the return tie against the Blues is at home, and is ahead of an easy final two games of the season. United can afford to give everything against Chelsea at the end of April knowing that they only have to face Huddersfield and Cardiff in the league afterwards.

Chong’s debut against Reading in the FA Cup was decent if unspectacular, but he offers a different kind of threat on the right-hand side to United’s other options.

As RedArmyBet wrote about in more detail here, he mirrors the type of attacking threat that United already have on the left flank, while also being able to interchange with other attacking positions around him.

The 18-year-old is far from the finished article, but he could be worth throwing on if United need to make a breakthrough in a particular game.

Just wait it out

It may ‘only be’ six points to fourth, but six points is a surprisingly large gap. If Chelsea and Arsenal keep up their current pace for the rest of the season, that means United would need to finish on around 86 points. That would be a big ask, leaving the Red Devils with wriggle room of only three dropped points across the entire season.