We tell you everything you need to know about United's opposition as they face Huddersfield, bringing you the latest betting tips and enhanced odds.

All you need to know about Huddersfield

With Aaron Mooy suffering with a hip injury, our focus is drawn to January signing Karlan Grant as one of the very few Huddersfield players that could cause us problems.

Despite starting just seven games and making a further four appearances from the bench, he’s already their top scorer this season with four goals to his name. One of those came against a ‘Big Six’ side in the shape of Arsenal, while he clearly has an eye for the net after bagging 14 strikes in 28 appearances for Charlton in League One.

He’ll be a rare threat on the counter with his speed, whether he’s deployed as the lone striker or on the left wing.

Karlan Grant to score anytime at 5.60*

The right-back may have captained Huddersfield on occasion this season but he’s endured a torrid time, and the last thing he needed to build up any remaining vestiges of confidence was to going head-to-head with Sadio Mane last weekend.

He’s only started 12 games this season as injuries and suspensions have played their part, but he’s been in the line-up for five of the six matches where they’ve conceded four times or more this season – including 5-0 losses to both Chelsea and Liverpool, as well as a 6-1 drubbing at the Etihad. Whoever Solskjaer starts on the left of our attack ought to have a field day. 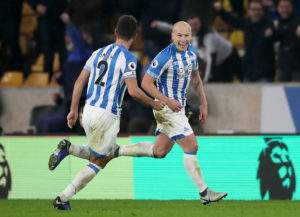 Almost as bad as Derby…but not quite

Huddersfield’s defeat at Palace just over a month ago saw them equal Derby’s record for the earliest relegation in Premier League history with six games still to go.

That makes them one of the worst teams to ever grace the top-flight, although the Rams aren’t quite about to give up that unwanted crown just yet. The Derby vintage of 2007/08 picked up just 11 points (Huddersfield have 14) and managed just one home win all season – their only success of the campaign home or away.

However, Derby are tied with Ipswich (94/95) and Sunderland (05/06) for the most defeats in a season (29), while Huddersfield will own that record outright if they lose their final two games. Just the one defeat here will see them take another record – the most home defeats – with Sunderland in both 2002/03 and 05/06 suffering 14 (Huddersfield already have that number).

However, their relegation at least protects them from another indignity. Derby went 32 consecutive games without a win, though as that was their last time in the top flight, technically they could extend that sequence if and when they next get promoted.

5 midfielders United could target this summer