A glance at Manchester United’s squad would tell you that Jose Mourinho is well-stocked in the attacking department.

With Romelu Lukaku as the main striker and a talent-rich pool of Alexis Sanchez, Anthony Martial and Marcus Rashford to choose from, the Portuguese has plenty of heavy artillery in the final third.

However, as has been well-documented, Martial’s long-term future at Old Trafford is shrouded in uncertainty and Sanchez has struggled in the goals department recently.

With that, reports have linked Inter Milan striker Mauro Icardi with a stunning January switch to United. Here, our friends at Football Whispers look at what the Argentine forward would offer the Red Devils.

If Mourinho is keen to alleviate some of the pressure on Lukaku’s shoulders, there are few better than Icardi. The 25-year-old has been one of Serie A’s most devastating marksmen over the last five years.

Since joining the Nerazzurri from Sampdoria in 2013, Icardi has scored 100 league goals in 162 appearances, giving him an exceptional goals per game ratio of 0.62.

Back United to win their Champions League group at 2.60 with RedArmyBet*

Having struck nine, 22, 16 and 24 in his first four years at the San Siro respectively, Icardi top-scored in Serie A last season, netting 29 times in 34 games. The South American’s clinical edge in attack helped seal Champions League qualification for Luciano Spalletti’s men, marking Inter’s return to the competition after a six-year exile.

Icardi’s white-hot form in front of goal last season prompted rumours of a potential move to Real Madrid. However, Los Blancos instead plumped for Mariano Diaz and, while Icardi remains an Inter player, there seems an acceptance that his long-term future lies elsewhere.

Like Lukaku, Icardi is a natural-born goalscorer. His game is defined by clinical finishing, intelligent movement and efficient link-up play. Although not blessed with blistering pace, Icardi is still quick and constantly makes sharp, diagonal runs between centre-halves to put himself in the best position for goalscoring chances.

Physically, Icardi differs significantly from Lukaku. Whereas the Belgian possesses plenty of power and aerial prowess, Icardi thrives on using his remarkable instincts for where the ball is going to end up. Lukaku, of course, also possesses this predatory edge but while he can sometimes rely on bullying defenders, Icardi prefers to be elusive, making his move at the perfect time before pouncing. 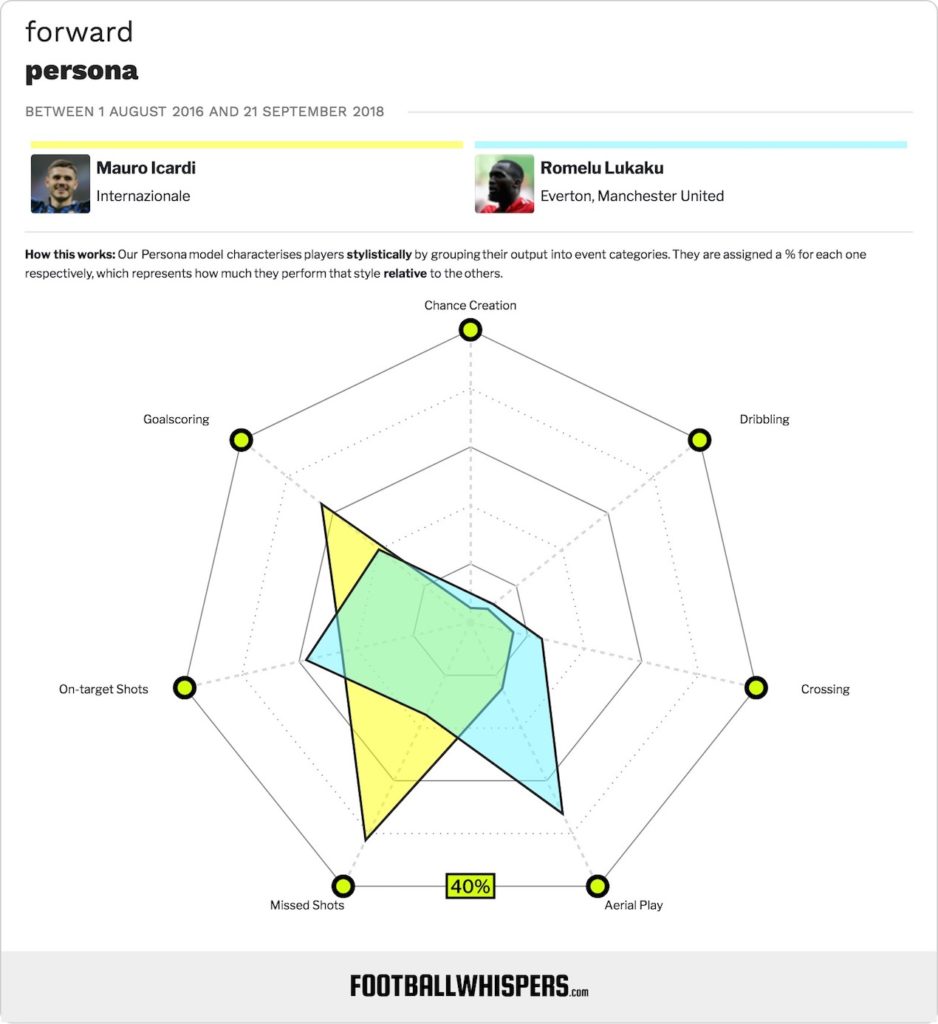 This sense of timing and space has helped Icardi stand tall among Serie A strikers. Last season, Icardi’s xG per 90 was 0.52, bettered only by Edin Dzeko of Roma and Milan forward Patrick Cutrone. However, Cutrone only played 1,531 minutes compared to Icardi’s 6,222.

In the post-shot xG category, which measures how much a striker is increasing the xG of his chance, only Dzeko surpassed the Inter captain’s total of 38.51. In other words, Icardi proved remarkably efficient at finishing his chances.

All 29 of Icardi’s goals came inside the penalty area; four with his head, three with his left foot and 22 with his right. Deployed as the sole striker in Inter’s 4-2-3-1, Icardi thrived on service from wide areas, particularly from Antonio Candreva and Ivan Perisic.

Icardi’s stats stack up impressively to Lukaku too. The Argentine’s xG per 90 of 0.53 beat the Belgian’s 0.49 last season, while he comfortably outperformed the United frontman in shot placement ratio, post-shot xG and goals-xG ratio. Whereas Lukaku only slightly outscored his xG of 15.7 for the season, Icardi’s 29 was 11 higher than his expected return of 17.49.

Icardi has also cemented a reputation as a big-game player. Lukaku has often been labelled a ‘flat-track’ bully for lacking potency against the top six sides but the most robust challenges usually bring out the best in Icardi. 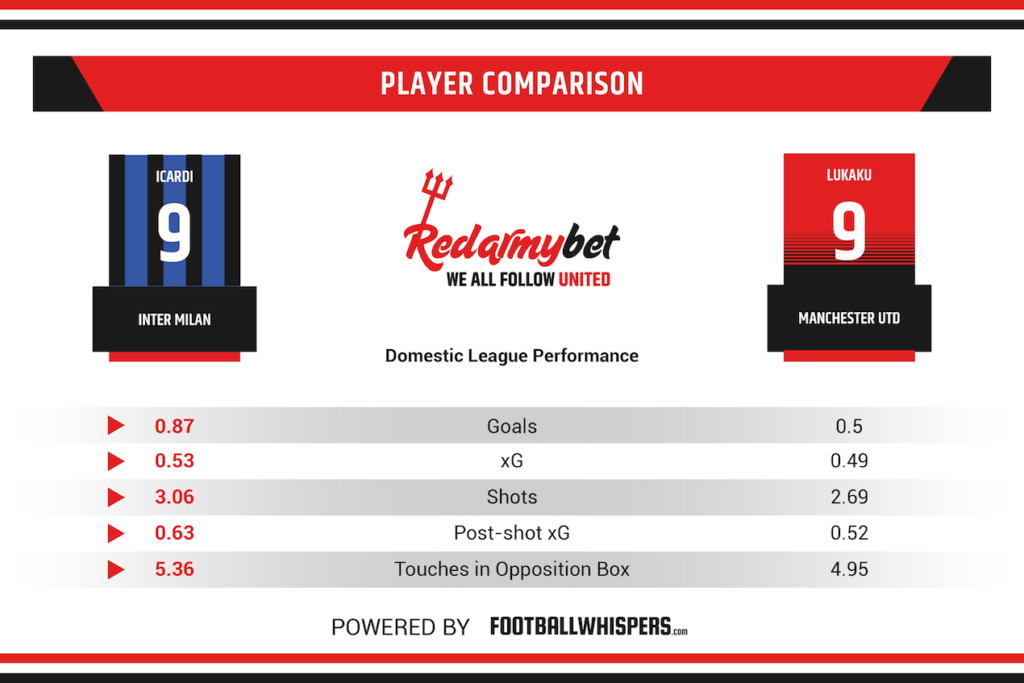 Last season, he scored a fantastic hat-trick in Inter’s derby victory over AC Milan before helping to clinch that all-important Champions League spot with a nerveless penalty against Lazio on the final day of the season. Then there was this week’s explosive volley to help the Italians beat Tottenham in the Champions League (which was, remarkably, Icardi’s debut in the competition).

Of course, Icardi’s arrival would have to signal a tactical switch from Mourinho. United tend to line up in a 4-3-3 with Lukaku flanked by two wingers. As Icardi operates centrally, he would provide direct competition for the Belgian. Alternatively, Mourinho may feel compelled to shift Lukaku out wide.

Back Lukaku to win the Premier League Golden Boot at 9.00 with RedArmyBet*

Although that would likely adversely impact his scoring output, Roberto Martinez used the former Chelsea man in a wide position to devastating effect against Brazil in the World Cup. With Lukaku’s speed and power, he could provide an intriguing – albeit slightly unorthodox – outlet on the wing.

However, having struck 31 goals in 56 games for the Red Devils, Lukaku is more than entitled to feel as though he has earned the main striker’s role. Being shunted out wide in favour of a shiny new arrival would almost guarantee disillusionment. The more likely scenario, if United do indeed swoop for Icardi, is pairing the Argentine with Lukaku in attack – and that’s a partnership potent enough to re-establish United as title contenders.