At the time of writing Manchester United appear to be in a state of stasis. Here are RedArmyBet.com, we have priced the club at 7/1 to win the Premier League title this season, some of the longest odds since 1991, making them distant third favourites behind City (at 2/3), and Liverpool (at 9/2).

In the United States Jose Mourinho has described everything about his pre-season as ‘bad’, with absentee players, the delayed introduction of Alexis Sanchez to the tour, a failure to recruit talent in key positions and with Anthony Martial intent on leaving the club this summer.

In addition, United’s makeshift side, still containing a raft of senior players, has struggled in their opening two pre-season matches, drawing both and hardly creating a chance of note in either. The players who featured in the early stages of the World Cup are starting to trickle in, but many will not be ready in time for the first Premier League match against Leicester on 9th August, the day the summer transfer window now closes.

United are a club in suspended animation, the fans worried about what is to come, the manager miserable, some players not entirely happy with their manager and everyone concerned wondering what the future will hold.

There is much for which Mourinho can be criticised, from his demeanour and negativity to the early pre-season football which has mirrored much of the dirge that we had to watch last season, but the one thing that he cannot control – the club’s investment in new players – is amongst the biggest contributors to the general despondency and ambivalence as the campaign’s opener approaches.

It was four years ago that Executive Vice President Ed Woodward proclaimed that “we (United) can do things in the transfer market that other clubs can only dream of”, and while Mourinho cannot claim to have not received significant backing, the club has not invoked the full force of its financial might in the last three summers. United carry a wage bill that is significantly comfortably 50% of turnover, one of the lowest ratios in the Premier League, and whilst Woodward is not afraid to invest heavily in commercially beneficial targets, he has appeared more reluctant to push the boat out for less glitzy additions.

As Liverpool recruit heavily and intelligently, the Glazers’ top man still seems focused, to a degree, on marketability. There are serious questions to answer as to whether the owners and their top man at the club are willing to spend what is necessary to win the trophies that really matter, to players at least.

In his second season Jose Mourinho lifted United comfortably back into the Champions League qualifying spots and it has not gone unnoticed that suddenly, with only just over two weeks of the transfer window remaining, the club’s transfer business has slowed. The fans, the players, and pundits know that the acquisitions of Fred and Diogo Dalot will not be remotely enough to even close the gap on City and stay ahead of Liverpool, let alone deliver the expected title challenge. Mourinho knows that too, possibly partly explaining his wretched mood, and whilst he should be getting far more from the talent at his disposal, he is aware that key squad weaknesses might prevent him achieving his goals in Manchester. 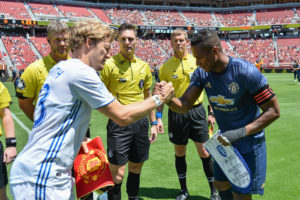 United played Club America in their pre-season tour which ended 1-1.

Importantly, the players will be watching with interest too, particularly key talents like David De Gea and Paul Pogba, who the club will be desperate to tie down to long term contracts in the next year or two. Neither will wish to waste the prime years of their career bobbing around the Premier League’s top four and are likely to be observing keenly to see if United’s ambition matches their own and their manager’s. To lose either feels unthinkable, but that is what we could be facing if the club and its owners do not demonstrate a desire to move to the next level.

Whatever Woodward briefs to his favoured members of the hack pack, Jose Mourinho clearly does not think that Ashley Young is good enough to be his left back this season, that Juan Mata is a superb right winger or that Marcos Rojo, Chris Smalling or Phil Jones are the centre backs of his dreams. All of those players are dedicated and hard-working, but grit and determination alone cannot elevate a team to the top of the world game.

The next two weeks thus feel like they may be absolutely key to the near future at United, more so than any other since the 2013 summer shambles under David Moyes. Mourinho must do better, but realism has enveloped a fanbase and, it would appear, the manager himself. If reports are correct and the Portuguese has a desire to sell Anthony Martial this window the club face a fortnight in which they will need to make at least two, preferably three, huge signings.

They may need to overpay to get their men. Sometimes it is necessary to do so because the likely medium term benefits would be both sporting and financial and Woodward cannot be seen to penny-pinch at a time when supporters and players are watching particularly intently.

United can now either back their manager to the hilt and give the impression to the watching world that they are intent on dominating English and European football once again, or sit on their hands and leave us in no doubt whatsoever that our concerns about the extent of their ambitions are justified.

It’s hard to recall a summer in which the supporters were looking forward to a season as little as this one. The reasons for that ambivalence are a combination of the fluency and attractiveness of the football we expect to have to sit through, the demeanour and general attitude of the manager and the fact that as things stand being competitive at the top of the Premier League is a pipe-dream. That can change to a degree with short-term investment and it is likely that United’s star players will be watching as intently as supporters. The next two and a bit weeks will tell us exactly where the club aspires to be.