Is it Time to Give United Fans a Bit of Credit?

Reds deserve a reprieve from the stick constantly levelled at us.

The term populism has certainly become, well, ‘popular’ of late as everything from Brexit, President Trump and a Jeremy Corbyn-led Labour Party are explained as being the result of ‘populism.’ Now I’m no etymologist, in fact I even had to look up the word etymology but it seems that being ‘populist’ simply means telling people what they want to hear. For Vote Leave it was ‘being controlled by Brussels is bad’ for Trump it was ‘everyone else but you is to blame for your problems’ for Corbyn, ‘austerity is a complete p*ss take’ or words to that effect.

One populist argument that never gets old is the one about fans of Manchester United being spoiled, part-time, glory hunters, who are everything that’s wrong with football. If you’re looking to tap into an ever-present zeitgeist then slagging off Reds be it through social media or the actual media is a great place to start. It’s up there with trolling Piers Morgan or posting pictures of cats that look like Hitler in the list of things people never seem to tire of.

It’s not just our rivals that take aim at us, United fans even do it to one another, with match going Reds often found arguing with those who don’t go, or those that don’t go accusing match goers of thinking their opinion makes them some form of ‘Top Red’ – a phrase I’d quite happily like to take outside the backdoor and execute with a sawn-off shot gun if I had the chance.

Why do United fans breed such contempt? Why does the media seem to focus on us far more than our rivals, why do our rivals pay more attention to us than their own clubs and why do fans of teams who’ve literally no rivalry with us whatsoever get so involved and irate with us?

United to be leading against Valencia at half-time was 3.25 now 3.60

Much of the answer can be found in one obvious reason – jealousy. Yes, United right now are as bad as they’ve been for most of our lifetimes, but for much of that lifetime the Reds were dominant, winning over half of the available Premier League trophies. Throw in the fact United are still the only English team to do the treble – the real one, not one that involves a cup sponsored by a brewery. Add to that the fact that United have won so many games and trophies in the final minutes, thereby increasing the disappointment and irie of anyone praying for us to fail. Top it off with a couple of Champions League wins and a long-serving manager who riled anyone who came up against him, not to mention a new manager who does exactly the same and you’ve got yourself a nice serving of unbridled hatred. 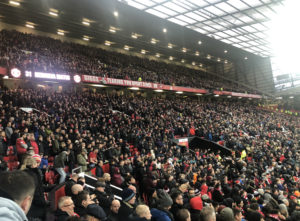 Mocking United fans has seemed such fair game that even the Reds’ own captain has done it in the past, coining the term ‘prawn sandwich’ brigade, while social media has given us all the opportunity to highlight and amplify any errant comment by a Red whose ‘supporter’ credentials may be less than exemplary.

Is it time to change the narrative though and for once acknowledge that as a fanbase United’s isn’t the festering pile of megastore merchandise it’s being portrayed as and as we’ve seen of late the fans have actually done what many of our rivals find alien – turned up for the game and got behind the team.

Take the recent home game against Fulham as an example, yes there were some empty seats and we all know the official attendance of 74 thousand is about as accurate as Martin Keown’s analysis but there was still easily upwards of sixty odd thousand Reds inside Old Trafford. Now, the media will pounce on this as an example of ‘how far we done fell’ but let’s look at it objectively for a minute, here’s a team in mid-table, who’ve not won at home in the league for over a month, facing a side they’ve no real rivalry with and the attendance is still what every other club in the top flight can only dream of.

Manchester United fans vs fans of other clubs

If you think fans of other clubs would be happy to turn up in their droves to watch dross every week, then take a look at high-flying Spurs who could only muster 33 thousand fans for their recent Premier League home game against Southampton. Yes they’re at Wembley but it’s still in North London not Timbuktu and last time I checked the papers, Spurs were playing football that good it had the media claiming their manager should take over from ours, so why don’t the fans bother to turn up and watch it?

We’re constantly reminded that media darlings Manchester City are playing the ‘best football in the history of the universe’, yet I’ve seen more people at a Steve Brookstein concert than at some of their matches, there’s massive swathes of empty seats that are explained away with a multitude of bizarre, often cringeworthy reasons.

Liverpool haven’t won a trophy in six years, have arguably the best team they’ve assembled in over 20 years and a reputation of being among the most loyal, passionate fans in the country yet when they faced Chelsea in the League cup around 8 thousand tickets went unsold. Now it’s hardly a crime to not watch your side getting dumped out of the least glamorous trophy available, but if you’ve not seen any silverware in over half a decade, have a team who everyone raves about and a manager you adore wouldn’t you take every opportunity to go and watch them? If not then should you be criticised? Of course not. So why was United’s attendance of fifty odd thousand for the league cup game against Derby a source of amusement to many, yet Liverpool couldn’t match it for a game against a Premier League side? Why do Spurs get a pass from the media for a Premier League attendance less than what you’d expect at Championship Aston Villa while if the Reds’ dips below 70 thousand it’s labelled a crisis.

It’s not just the number of fans that United deserve some credit for, after all people will point to the cup scheme and less than accurate numbers as to reasons why Old Trafford’s attendance is often more than that of our rivals. The atmosphere at United’s home games has been much improved of late, hardly amazing but when you consider the football on offer, the position of the team and what riches Reds have seen before, maybe it’s time to give our fans a bit of a break – even if that’s not very populist.

Could Arsenal Midfielder Be The Answer For United?