Is Jose still the Special One?

There is a scene in the trailer for Amazon Prime’s new documentary following Manchester City’s 2017/18 season in which Pep Guardiola explains to his players that he will always defend them to the media, but in the relative privacy of the changing room he will tell them what he thinks.

It is a similar approach to that taken by Sir Alex Ferguson during his 27 years at United, protecting his squad as much as possible from external criticism but tearing a strip off them if necessary behind closed doors.

Top footballers have to accept negative appraisals from their manager, but keeping it private and offering support for them in the media can often add to the individual and collective trust a squad of players feel in their manager.

At Fergie’s United it contributed to a mostly united team spirit and it is possible to see the same one for all, all for one camaraderie at City. For Sir Alex there were rare exceptions, for example when Wayne Rooney informed him that he would not be renewing his contract and the great man put on a masterful display in a press conference to put the pressure firmly back on his wantaway player, but his protection of his squad contributed to the reverence they felt towards him.

For all of the latest United transfers visit RedArmyBet.com

In the early part of Jose Mourinho’s managerial career a similar phenomenon was apparent. At Porto, Inter and in his first spell at Chelsea the Portuguese had a love/hate relationship with the press and regularly sparred with other managers he felt were a threat, but his squads were largely unified behind their manager.

He defended them and created a pied-piperesque dynamic in which he persuaded them that he was going on a fantastical journey and if they came too he would fight to the metaphorical death for them. Mourinho had a glint in his eye and a fire in his belly and that sense of mischievous genius proved intoxicating for his players.

The result of his bond with his squads was to take those three clubs to almost unparalleled – in their own histories at least – success. When he left Inter after a historic treble the devastation and collective respect and admiration that poured forth from his players was remarkable. The following campaign, under new coach Rafa Benitez, Inter sunk without a trace, the Spaniard totally unable to recreate the wave of positive energy which the club had ridden to glory.

United are 7/1 to lift the Premier League trophy

Then, in 2010, Mourinho moved to Real Madrid and something changed.

Perhaps it was the intensity of his rivalry with Pep Guardiola and Barcelona and the psychological weight of coaching a team that would never accept an underdog dynamic and pragmatic approach, but the Portuguese seemed to lose his sparkle. Whilst a single La Liga title, Copa del Rey and Spanish Supercopa were won in three years in Spain it was Barcelona and their young manager who largely held the upper hand. 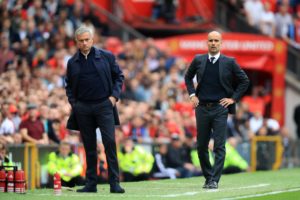 Mourinho and Guardiola have had a somewhat strained relationship at times.

For whatever reason Mourinho began to react to the challenge of coaching stars at a club at which domination was an expectation by picking internal fights with his own players. His mood and his own behaviour darkened and he turned to teaching his own players a lesson in an attempt to motivate others. The tactic was not always successful and it is difficult to achieve your goals with a divided dressing room. Mourinho made an example of Iker Casillas, a Real legend and popular figure in the squad, and fought with Sergio Ramos and Cristiano Ronaldo. The result was a group fractured between the ‘Madridistas’ and ‘Mourinhistas’. When he finally departed the Bernabeu many were happy to see him leave.

For all of the latest Premier League odds visit RedArmyBet.com

Back at Chelsea he initially rebuilt an ailing side and won the Premier League in his second season, but as season three approached and his club failed to deliver the player acquisitions he had requested the cracks started to show. Total meltdown followed, and by the time of his exit he had fallen out with key players, lost the unquestioning devotion of others and, with the Eva Carneiro affair, totally broken the mythical status he enjoyed at Stamford Bridge.

When things are going well for Mourinho all is calm, but as results turn his mood darkens and his anger is directed inwards. The Madrid experience appeared to drain the mischievous glint in his eye and a bundle of combative energy, who elicited the total devotion of his players whilst bickering with the press and rival managers, became an often cantankerous grump.

It is that somehow diminished figure that has now managed United for over two years. Without his hypnotic spell he is still a fine coach and has led United to two trophies and an improved Premier League finish, but the genius that carried Porto, Chelsea and Inter to great success appears so far to be absent without leave.

Mourinho has been fractious, frequently criticises his own players and is reluctant to offer praise. For some it may work, but for others it plainly hasn’t and it is clear that whilst many of his squad deeply respect the man and his past successes, there is not the devotion that he enjoyed in Italy.

Some believe that Mourinho’s attitude has affected his relationship with some players.

Damagingly he has at various points fallen out with or chosen to sideline or punish some of his most naturally talented individuals, a state of affairs that makes the sort of heights that would be required to usurp City in the Premier League seemingly unassailable.

This difficult relationship with some of his own players is relevant this summer because United appear unable or unwilling to enhance the squad beyond the acquisitions of Fred and Diogo Dalot. Without significant strengthening in the final two weeks of the window the only route to domestic and European glory will be to get far more out of the talent the manager has at his disposal.

Too many have struggled to find their best form under Mourinho to challenge and often that has led to him offering public criticism. The Portuguese appears loathed to praise many of his own charges and his combative, roughshod approach seems likely to claim its first victim in Anthony Martial, a prodigious but unfulfilled talent who now looks set to leave with a feeling that his manager has no belief or trust in him.

For all of the latest United specials visit RedArmyBet.com

By the end of his second spell at Chelsea Mourinho had managed to persuade many of the club’s fans that Eden Hazard and Diego Costa were malign influences and a similar evolution has taken place with Martial. One suspects that when the manager is gone United will live to regret the loss of a talent who at the age of nineteen carried – with David De Gea – the team during Louis Van Gaal’s final season and who was playing well in 17/18 until Alexis Sanchez usurped his left wing position.

Regardless of where the individual apportions blame for Martial’s likely departure, with better players looking increasingly unlikely Mourinho is going to have to change something within the club to improve fortunes further. Tactical changes may help, as the team often looked disjointed last season, but more will be required.

The manager needs to rediscover that glint in his eye, embrace positivity and a them-against-us mentality and to start to build the same level of reverence that he elicited in his most successful pre-Madrid years.

Perhaps it may be better to follow the examples of Sir Alex and, dare I say it, Pep Guardiola, and protect his players from external criticism. They would respect him for it, whilst also accepting the internal scorn that any manager must deliver. United and the club’s squad need more than a very good coach now. They need to see the return of the Special One, ingenious, Machiavellian and protective, a man his players can unite behind.