Will Mourinho come out on top at United after a poor start to the season?

Following Monday night’s grueling 3-0 defeat at the hands of Spurs, Mourinho once again has found himself under pressure, which even resulted in him storming out of a press conference after demanding respect from the media.

Questions loom over Mourinho’s supposed “third-season syndrome” and three games into the season, he seems to be heading that way again. Is Mourinho still the man to lead United forward?

This is arguably the biggest task Mourinho has faced so far as a manager, and it is definitely his biggest in charge of the Reds.

His press conference following Monday’s defeat left fans with more questions than answers in terms of what he can do to reinvigorate this team.

Mourinho simply answered, “no”, when he was asked if he was aware of his best backline, the manager then appeared to throw defender Phil Jones under the bus for one of the goals, however some will argue rightly so after the defender was lucky to not concede a penalty.

A manager who is seemingly in control often wouldn’t react in this way at a press conference.

With regards to the “third-season syndrome” that has frequently been brought up since the loss to Brighton, it appears to be heading in the same direction as previous seasons in which Jose has left during the third season.

In his final season at Chelsea, Mourinho publicly viewed his dismay at physio Eva Carneiro and then after his final game in charge spoke negatively about all his Chelsea players.

At Real Madrid, Mourinho frequently argued, in public view, with iconic Los Blancos players such as Iker Casillas and Sergio Ramos before he left at the end of the season. 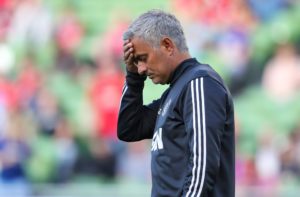 This start to the season has been one of Mourinho’s toughest.

Despite these negative notions about his third season, Mourinho could still be the man to take United forward, should results begin to improve.

Ed Woodward and the board have rightly come out and backed their manager, considering we’re just three games into the new campaign.

Of course, it is disappointing for a club like United to go a whole season without a trophy, but finishing league runners-up to City last year and in the FA Cup isn’t all doom and gloom, although it may feel that way for United fans.

Second in the league was a dramatic improvement in comparison to the sixth-place finish from the 2016/17 season, and we have certainly moved on from the short reign of David Moyes that left the Reds in seventh position.

The season hasn’t got off to the best of starts, but all it takes is a good run of form in some favourable upcoming fixtures for good fortunes to return.

Right now, Mourinho still could be the man for the job but another couple of big losses and public outbursts could see the end of the Special One.