Ahead of the Manchester derby Red Army Bet look back at some of the best Manchester United v Manchester City encounters from down the years.
Matthew Crist  |  23rd April 2019

Manchester United and Manchester City have provided plenty of entertainment when they’ve met down the years and there’s little to suggest this latest encounter will be any different.

Battles between United and City don’t always provide the greatest quality when it comes to the football that is played due to its blood and thunder nature, though what is certain is that over the decades this fixture has thrown up some fascinating and thrilling encounters.

So here are just some of the more memorable matches played between Manchester United and their nearest and noisiest of neighbours.

Keen to avenge their 5-1 hiding just over 12 months previously, Alex Ferguson’s improving side headed to Maine Road to face a City side who were now managed by Howard Kendall.

But David White’s quick-fire five minute brace handed City the ideal start as United fans began to fear the worst yet again, before Mark Hughes provided the reply, heading home to give United hope. However, Kendall’s men appeared to be home and dry with 12 minutes remaining when Colin Hendry’s galloping run resulted in what many thought was the decisive third goal.

But with time running out substitute Ian Brightwell gave the ball away to Brian McClair, who needed no second invitation to pull United right back into the match and just two minutes later McClair grabbed another, flicking home Steve Bruce’s powerful header from a corner to make it 3-3 in front of the delerious United fans .

It all looked to be going to plan for City when Niall Quinn headed Brian Horton’s men into a two goal lead before half time as United battled to retain their Premiere League title in November 1993.

But Michel Vonk’s wayward back header was pounced upon by Eric Cantona to halve the deficit before the Frenchman made it 2-2  on 78 minutes, slotting home a perfectly weighted through ball from Ryan Giggs. And with just three minutes left a young Roy Keane, who never stopped running that day, smashed home the winner in his first Manchester derby.

Earlier in the day City fans had taunted their red rivals for giving up a two goal lead to go out of the European Cup to Galatasaray a few days earlier. Needless to say, victory had never been so sweet for the thousands of United fans stood on the Kipppax and scattered around Main Road that afternoon. 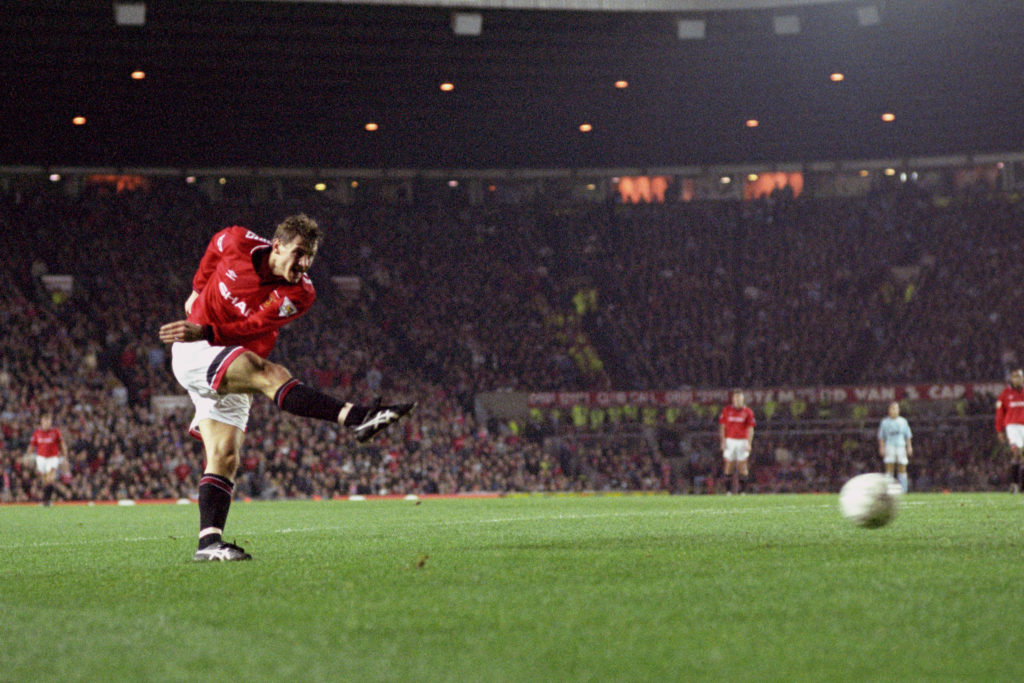 Just eight days previously United had suffered a humiliating 4-0 defeat at the hands of Barcelona in the Champions League, so when City arrived at Old Trafford on a cold November night, they could have been excused for fancying their chances against a side that was still shell shocked.

But City would never manage a win against their near neighbours throughout the 1990s and this demolition was without doubt their biggest failing as Eric Cantona opened the scoring with Mark Hughes and a hat-trick from Andrei Kanchelskis completing the drubbing on one of the most memorable derby nights Old Trafford had ever seen.

The victory also meant that United had finally avenged that 5-1 humbling some five years previously and what a way to do it.

The game between Manchester United and Manchester City on September 20, 2009 was the first of four meetings between the two sides that season but was, without doubt, the greatest of them all as the big spending Blues, who had splashed over £100 million on new talent over the summer, looked to assert their authority over their far more successful rivals from the other side of the city.

Wayne Rooney scored the opener in what would be an epic end-to-end encounter only for Gareth Barry to equalize for the visitors but the home side were soon back in front again through Darren Fletcher, who scored two goals that day, only for Craig Bellamy to pull City level with two of his own, including a late equalizer after a slip from Rio Ferdinand looked to have earned his side a point.

But going into the sixth minute of injury time and the game tightly poised at 3-3 United had other ideas as Ryan Giggs’ inch perfect through ball found Michael Owen inside the box who just had enough time to compose himself before slotting the ball home in front of an ecstatic Stretford End to complete a thrilling comeback as Old Trafford erupted.

Denied the league title in such spectacularly late fashion at the end of the previous campaign perhaps it was inevitable that Alex Ferguson’s Reds exacted some sort of revenge in dying seconds when they faced Roberto Mancini’s Blues at The Etihad seven months later.

Wayne Rooney’s early brace had put United firmly in the driving seat and looking certain to bag the three points until City hit back in the second half and pulled levelled thanks to strikes from Yaya Toure and Pablo Zabaleta.

With the game looking destined for a  draw Robin van Persie stepped up to take a last minute free-kick and his deflected effort crept past Joe Hart to send United’s travelling fans wild. The dramatic win was not only City’s first defeat in almost two years it also put United six points clear and would set them on their way to lifting a record-extending 20th league title.

With the Blues poised to lift the Premier League title with a win against their bitter rivals the Reds ensured they would have to wait another week to crack open the bubbly thanks to an incredible second-half comeback at the Etihad Stadium.

City stormed into a two-goal lead thanks to Vincent Kompanys thumping header and Ilkay Gundogan’s neat finish to put them on course to seal the title against their rivals in the most emphatic way imaginable, but Jose Mourinho’s men had other ideas and crashed the party in one of the sweetest ways imaginable.

To the amazement of almost everyone in the stadium that day a brace from Paul Pogba pulled United level against the run of play before Chris Smalling became the most unlikely of heroes when he volleyed home from Alexis Sanchez’ free kick to put the visitors ahead with 25 minutes remaining and the Reds held on to delay the celebrations for another few days at least.

We have now completed a review of all outstanding bets on RedArmyBet and have settled them appropriately based on current market value.

Thanks for the feedback. We appreciate it.

Taking a look at the latest #MUFC transfer rumours with @AngelinaKelly...

"A reserved young kid, head down, getting on with his business and trying to forge his way in football."

Reply on TwitterRetweet on TwitterLike on Twitter2Twitter
Load More...