The Ole Gunnar Solskjaer honeymoon period is over. After eight wins on the bounce in all competitions, Manchester United’s interim manager’s dream start to life in the Old Trafford dugout was brought back down to reality by Burnley, who took a point away from the Theatre of Dreams on Tuesday.

Having beaten Arsenal in the FA Cup, confidence in United clinching all three points against the Clarets was sky-high. But Burnley hadn’t read the script, racing into a 2-0 lead and forcing a late fightback from their hosts.

But those two late goals – courtesy of a Paul Pogba penalty and Victor Lindelof’s first for the club – means Solskjaer remains unbeaten and looks to bounce back with a win at Leicester City on Sunday.

Thankfully, United have a strong record against the Foxes. Here, we preview the game at the King Power Stadium.

Burnley was a minor blip but the manner in which United rallied late to secure a point will have given the players a major boost heading into Sunday.

United have been impressive on the road under Solskjaer, too, and hope to win a fifth consecutive away game in all competitions for the first time October 2012, when Sir Alex Ferguson was still in charge.

After dismantling Cardiff City, the Red Devils ran out comfortable winners at St James’ Park over Newcastle before securing three hard-fought points at Wembley against Tottenham. Now, with the virtuoso counter-attacking display at Arsenal still relatively fresh in the memory, United hope to get back to winning ways and move above Arsenal, who travel to Manchester City later on Sunday.

Leicester, however, are an unpredictable side, equally capable of pulling off major shocks and crumbling spectacularly.

Since Solskjaer took over at United, Claude Puel’s Foxes have beaten Chelsea and Manchester City in consecutive games, lost at home to Cardiff, been dumped out of the FA Cup by League Two’s Newport County, lost at home to Southampton, been edged out in a seven-goal thriller at Wolves before securing an impressive point at Anfield on Wednesday.

Leicester are no longer Claudio Ranieri’s miracle makers but it’s ironic that, even under the more measured, reserved Puel, they remain one of the Premier League’s most Jekyll and Hyde teams; erratic, entertaining and, at times, shambolic.

Solskjaer is expected to make some changes from the Burnley game. Having been culpable for the Clarets’ opener, Andreas Pereira will almost certainly be dropped to the bench. Ander Herrera looks the Brazilian’s most likely replacement.

The Norwegian may look to shift Marcus Rashford back into a central role – who often occupied the left flank on Tuesday – drop Romelu Lukaku and recall Jesse Lingard after his impactful appearance from the bench midweek.

United won’t be as penned in as they were at Spurs or Arsenal but may continue to find joy on the break. With Rashford, Lingard and Pogba all on the same wavelength in recent weeks, United have looked slick pouring forward in numbers. Do that effectively at the King Power and it may prove too much for their hosts.

But Puel’s side also carry a significant threat on the counter, as evidenced in Wednesday’s draw with Liverpool. With Jamie Vardy, James Maddison and Demarai Gray, the Foxes have the potential to hurt a United defence which has kept just two clean sheets under Solskjaer.

The Frenchman continues to exert plenty of influence in midfield. With six goals and four assists, Pogba has been directly involved in more than half of the league goals scored during Solskjaer’s reign, and showed a cool head to fire his penalty past Burnley keeper Tom Heaton and offer his side a lifeline.

The 25-year-old also scored a penalty when United beat Leicester in August and should be confident of continuing his productive form on Sunday.

While he may not start, it’s worth noting that Juan Mata boasts an impressive goalscoring record at the King Power, having netted four three in his last two appearances, including a brace in December 2017. 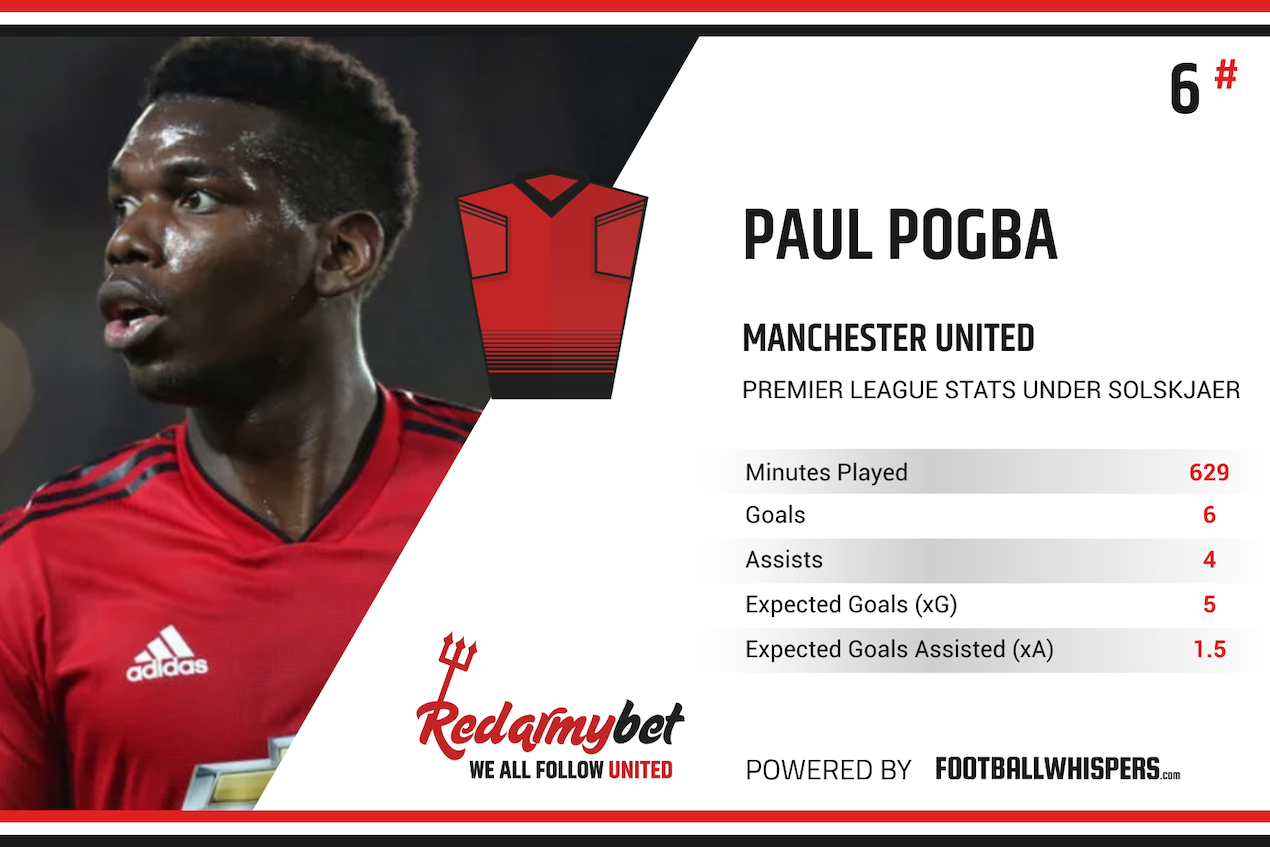 As well as being Leicester’s top scorer this season with seven, Vardy has found the net four times against United since August 2014, the joint-most during that period with Gylfi Sigurdsson and Sergio Aguero.

While Maddison and Gray possess a great deal of pace, Vardy remains Leicester’s danger man. Lindelof, who has been excellent recently, will have his hands full with the 32-year-old.

Although previous results bear little significance, it’s difficult to look beyond the fact that United have beaten Leicester in 16 of their last 20 games in all competitions.

United’s only blip in recent memory was the defeat at the King Power in September 2014, in which Angel di Maria scored the goal of the season before the Red Devils surrendered a 3-1 lead to eventually lose 5-3.

But we’re backing Solskjaer’s men to bounce back from the minor slip-up to Burnley with a convincing win here. It seems likely that both teams will score but United should have enough firepower to take all three points back to Manchester.