He was hooked by Jose Mourinho at half-time on that occasion in the 3-2 defeat at Brighton after losing various duels and a number of wayward passes, while he was once again guilty versus Burnley as he lost possession to allow them in for their opener.

Yes, rotation can be necessary and the Norwegian can’t play his best team every week, but he had £52m Fred – who has barely had a look in recently – that he could have utilized if he was determined to give Ander Herrera the night off.

Juan Mata has become a bit-part player under Solskjaer as he’s spent the entirety of the match on the bench in four out of nine games so far across all competitions, while he only saw 15 minutes as a sub against Brighton.

The encounter with Burnley was the first full 90 he’s had under his belt since the switch in the dugout, but he looked off the pace and with speed (to put it mildly) having never been his core strength, he just simply doesn’t tactically fit the counter-attacking style on show in recent weeks.

We looked far more dangerous when Alexis Sanchez and Jesse Lingard came off the bench, though in fairness to Solskjaer, Burnley were always going to defend doggedly at Old Trafford and the Norwegian can be excused for thinking Mata’s creativity and ingenuity could unlock a tightly packed backline.

Despite our criticisms of Solskjaer’s team selections, it’s hard to blame him for selecting Romelu Lukaku and Marcus Rashford together up front in an adventurous line-up against a struggling Burnley outfit.

The Belgian produced a man of the match performance in his previous outings as he laid on two assists at the Emirates in the FA Cup, but with the number nine struggling badly here, Rashford must surely return to the centre with Sanchez and Anthony Martial currently delivering the goods.

The young English starlet did fluff his lines early on with the game goalless, but he’s been clinical of late and one missed chance isn’t going to ruin his confidence.

Given he’s netted in five of seven matches under new management, combined with the fact that the Foxes have shipped an average of over two goals per game across their 15 matches hosting the ‘Big Six’ since 2016/17, he should fancy his chances of registering here.

Marcus Rashford to score anytime at 2.45* 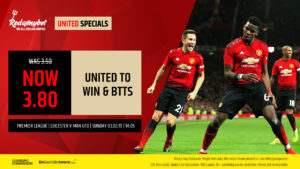 Although the result was disappointing, especially with Chelsea spectacularly dropping points at Bournemouth in the race for fourth, re-establishing the tradition of late goals (something Solskjaer epitomized as a player) was certainly a welcome sight.

There was no lack of fight or desire in trying to break Burnley down, even if it did result in too many pot shots as patience wasn’t the greatest virtue on display, though in all fairness Tom Heaton was excellent and deserved his man of the match accolade.

With the return of Fergie time and rapid counter attacks however, there’s a clear identity once more. 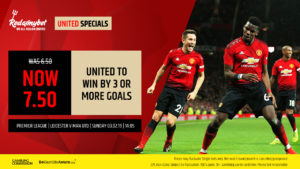