Which man will fare better on Sunday?

Arsenal fans might, before Wednesday, have looked at Manchester United’s injury list and thought that this weekend would be a good time to play them. Then came the two teams’ trips to France.

On one side, a fantastic victory against the odds; on the other, a disappointing display to a team that should have been beaten.

To make this Sunday’s tie look even more attractive for United, the Emirates Stadium has been a happy hunting ground in the past. In fact, United have won at the ground more times than Arsenal have in this fixture (six to five).

One of those occasions was earlier this season under Solskjaer, of course, a comfortable 3-1 win in the FA Cup fourth round.

Of course, another thing deeply tied to the history of this fixture is a certain feistiness, and Arsenal have been particularly ill-disciplined of late. They’ve received three red cards in their last six matches.

Lacazette and Lukaku have both scored 12 Premier League goals this season, and have both hit a run of form in 2019 after a spell of difficult form towards the end of 2018.

The Arsenal striker has hit three goals in his last five appearances, but this pales into insignificance when compared to Lukaku’s last few games. A brace in his last three showings is certainly a hot streak, ending a drought of nine appearances without hitting the back of the net.

United special: Lukaku to score two goals or more and United to win, 18.00*

Both strikers also share in being moved around different positions by their current manager. Solskjaer spoke after Lukaku’s double against Crystal Palace about how the Belgian had been shifted around the attack during his reign.

“He’s played more than you think, but he’s played wide right, wide left,” he said, “it’s Rash’s form that has moved him out there.

“Now with Rash’s injury, he grabbed his chance.”

Lacazette has had to vye with Pierre-Emerick Aubameyang too, the Rashford to the Frenchman’s Lukaku. It’s forced him to have more of a rounded game, which United’s Belgian forward hasn’t quite added yet. 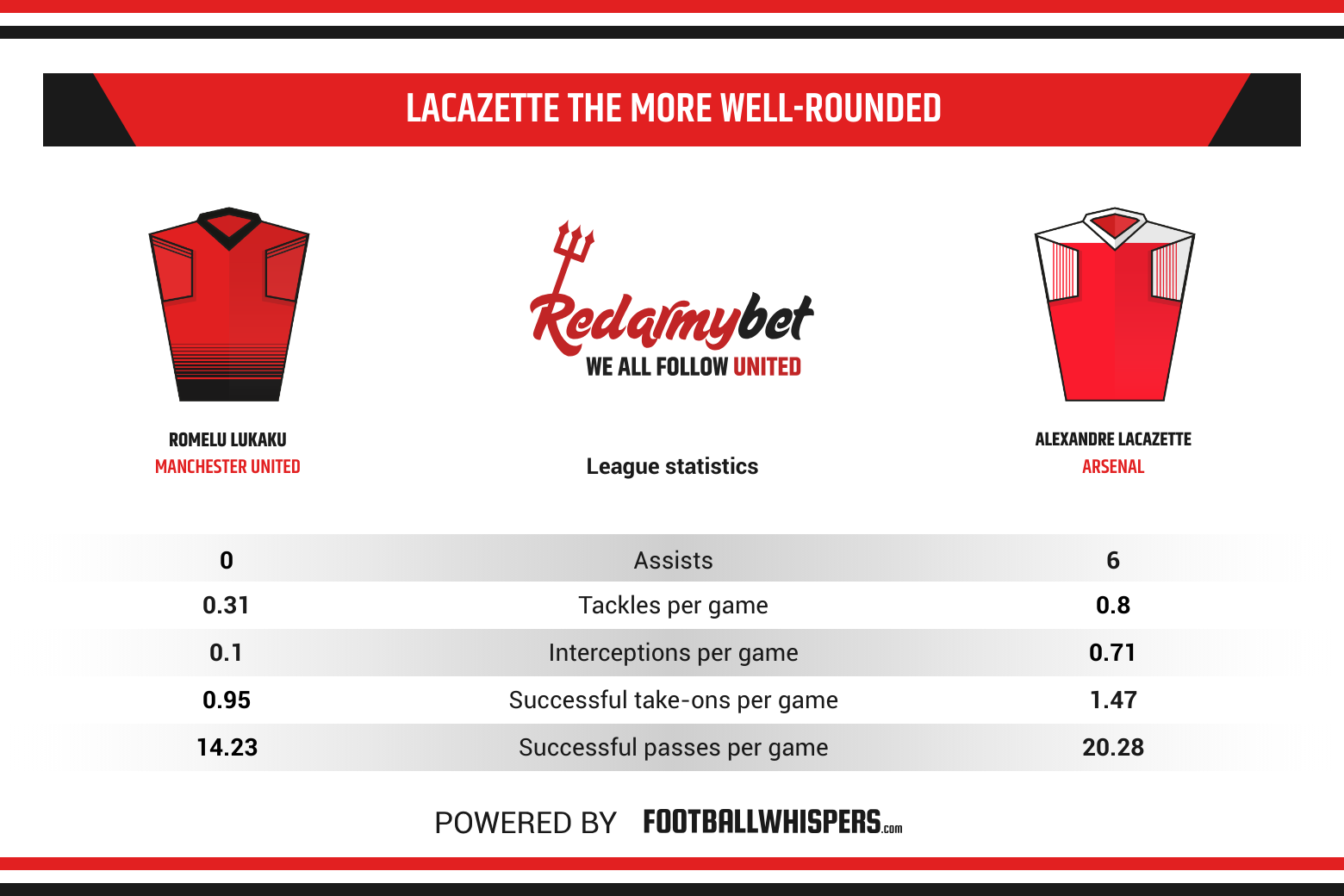 Lukaku’s lack of assists this season is something of an under-the-radar mystery. He’s never been the type of striker who hogs all the chances in the past, although he might be unfortunate to have none at all this season. The quality of the shots he’s set up accounts for 1.86 expected goals, so having a zero in that column seems unlucky.

However, it’s still a little way off where he’s been in his previous seasons. Whenever he’s played regularly, Lukaku has reliably got around half a dozen assists in a league campaign.

This has also been the first season since he joined Everton that his average number of minutes per league appearance has dipped below 80 (all the way down to 65 at the moment). It’s a stark sign of his changing status, from nailed-on starter to a player who’s been rotated in and out because of form.

That’s something that Lacazette has experienced at Arsenal too since joining Arsenal, no longer the star of the side as he had been at Lyon.

It’ll be Lukaku who will be the one fancying his chances the most ahead of this game, though. Not only is he in form, but Arsenal’s defence continues to look shaky, while United’s defence is the only area staying free of injury at the moment.

Could the Belgian make it four braces in a row?