The Belgian has gone over six games without scoring for United

Lukaku had just turned 24 and his reputation as a lethal finisher combined with an opportunity to take his game to the next level at a club of United’s stature meant he was seen as the man to replace Wayne Rooney as the talismanic figure in attack.

Lukaku delivered. With 27 goals in all competitions, the former Everton forward established a platform on which to build his United legacy. Recently, however, he has not been firing on all cylinders, so our friends at Football Whispers delved into the stats to explain his slight dip in form.

Although he struck twice for Belgium in their UEFA Nations League win over Switzerland on Friday night, United fans should temper their excitement.

United to finish in the Premier League top four at 4.00*

During September’s international break, the 25-year-old netted three times in two games for the World Cup semi-finalists having signed off with a brace for United at Burnley.

But Lukaku’s form in between his two stints of international duty has caused some concern. Although he opened the scoring in United’s win at Watford, Lukaku has failed to find the net in the subsequent six games, despite having been on the pitch for every minute during that stretch.

For a striker of his talent, it must be considered a duck.

Of course, Lukaku is far from the only United player to have struggled over the last month. However, while Paul Pogba put rumours of a breakdown in his relationship with Jose Mourinho behind him to play a central role in United’s comeback victory over Newcastle, Lukaku has yet to recapture the devastating form which established him as one of the Premier League’s finest marksmen. 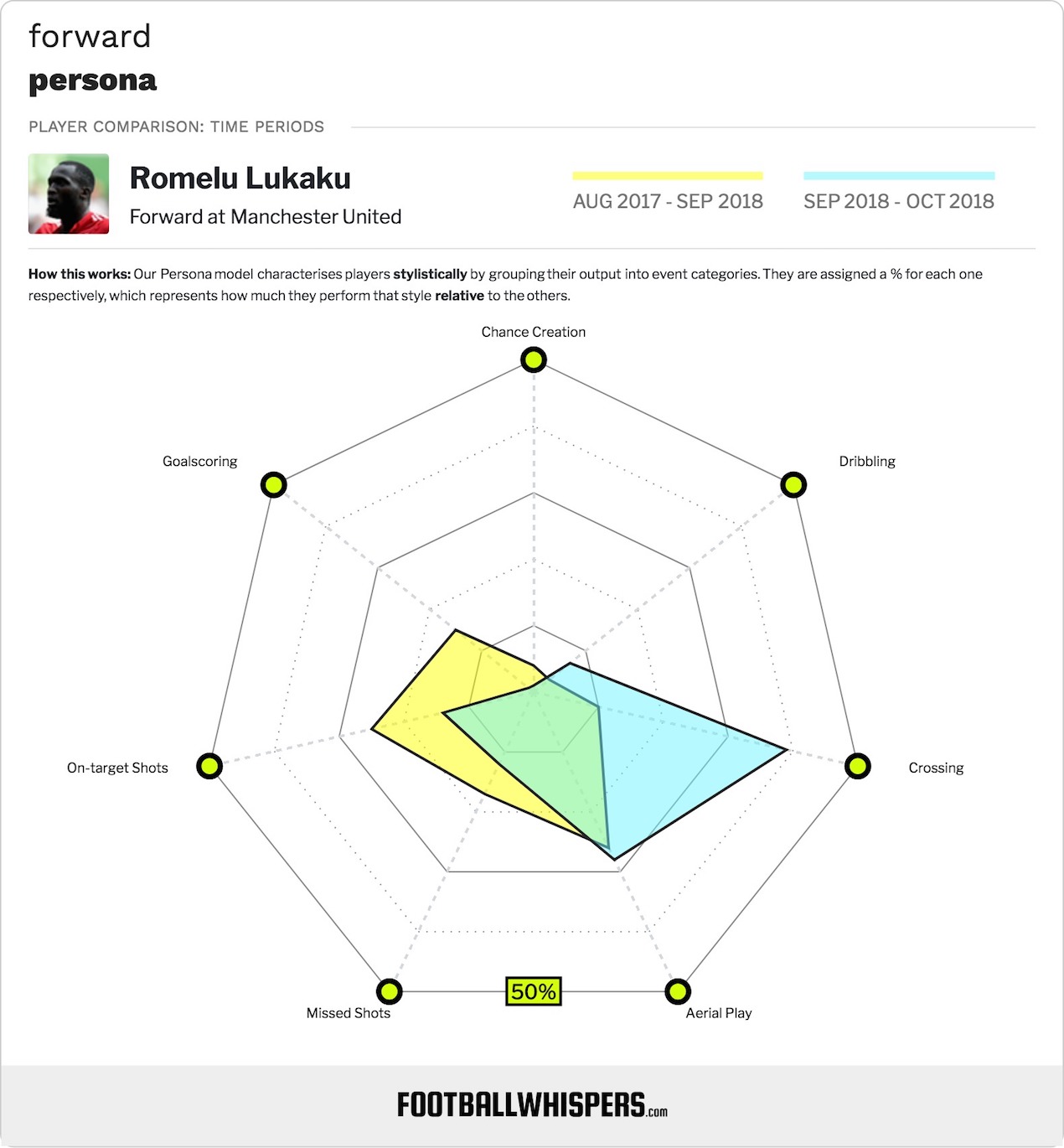 And the striker will not have scored any points with the United hierarchy after expressing interest in a future move to Italy, sounding out Juventus as a possible destination.

Ill-judged as those comments were, it would be hugely surprising if he left United anytime soon. For now, his focus should be on rediscovering that killer instinct that has deserted him in recent weeks.

Some of Lukaku’s stats over the past month make for surprising reading. In the three league games against Wolves, West Ham and Newcastle, Lukaku managed just three shots on goal. In the win over Newcastle, he didn’t register a single effort on goal in 90 minutes. For a player who averaged almost three shots (2.69) per 90 last season, that is a peculiar development. In that Newcastle game, Lukaku has fewer than half of Anthony Martial’s touches (35 to 78), highlighting how the Belgian struggled to impose himself on the game.

It was a similar story in the Champions League stalemate with Valencia. In fact, with just 33, Lukaku had the least touches of any outfield player who completed 90 minutes. He had two chances of note against the Spanish side, but failed to convert. In the 3-1 defeat to West Ham, he managed just 28 touches and just 25 against Young Boys.

Since the Watford game, Lukaku has averaged an xG per 90 of 0.07, a significant fall from the 0.49 he managed last season. He has, however, had 5.0 touches in the opposition box over the last month, which is up from 4.95 for last season, which weakens the potential argument that his teammates are not creating chances.

For his goals against Switzerland, Lukaku had time and space in the box, finishing with his left foot on both occasions. He was, admittedly, not afforded such a luxury against Newcastle after being well-marshalled by a diligent back-line in his most but there have been instances in which Lukaku has spurned presentable goalscoring opportunities. 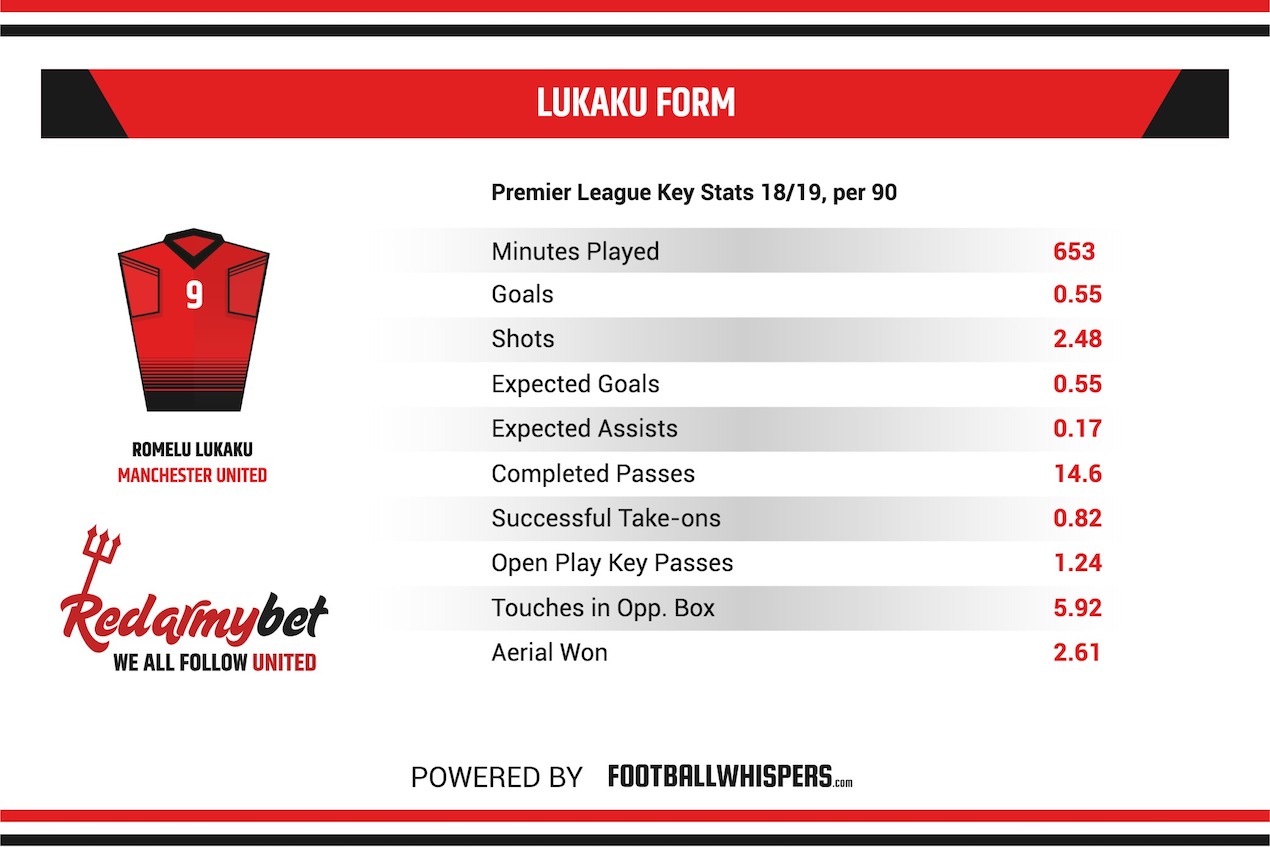 The most glaring came in the Carabao Cup defeat to Derby County. After a mistake by Rams captain Richard Keogh, the Belgian stole in for a one-on-one. Bearing down on goal, United fans expected to see the net bulge but, on his stronger left foot, Lukaku skewed his shot wide.

Of course, he relies at least partially on the United midfield but he has been wasteful when receiving the ball. Against Newcastle, he attracted ire from the Stretford End when he flicked the ball straight to one of the visiting players after being found by Pogba.

Lukaku is currently 15.00 to win the Golden Boot with RedArmyBet*

It is interesting, too, that Mourinho has persisted with Lukaku. With no goals or assists in six games, the Portuguese coach has still seemed reluctant to withdraw the forward during games, or indeed rest or drop him.

Marcus Rashford, Martial and Alexis Sanchez have all spent time on the bench recently. Marial has yet to find consistency but the Frenchman has at least scored twice since Lukaku’s last strike, including a well-taken equaliser against Newcastle after some neat inter-play with Pogba.

Sanchez, too, was at his lowest ebb just a few weeks ago but came off the bench to score a crucial winner against Newcastle. With Martial and Sanchez both capable of playing centrally in United’s 4-3-3, it’s high time for Lukaku to up his game to repay Mourinho’s continued faith.

A goal against his former employers Chelsea this Saturday would certainly be an emphatic way to end his scoreless streak.