How United can cope with their injury crisis

Who will be the ones to step up?

It was the first time in Premier League history that Manchester United had used all three substitutes in the first half. At one stage, it looked like everyone was struggling.

On top of Ander Herrera, Juan Mata, and Jesse Lingard going off, Marcus Rashford, with an ankle ‘like a balloon’ according to Ole Gunnar Solskjaer, was struggling too.

Injuries to first-team players are never a good thing, but the silver lining is that it will force some squad rotation and give some more fringe players a chance to play.

If these casualties were going to come, it was fortunate that they were in the positions they did. United’s squad is big enough that there are obvious candidates to step into the midfield and attacking positions, but had this been at full-back, for example, it would have been a far different story.

The Liverpool match was the start of a stretch of five matches in 15 days. Coping with the current injuries is one thing, but Solskjaer and his staff will need to be careful that the players who are left don’t get worked too hard and end up adding to the injury list.

Lingard is the obvious cautionary tale. Not fit enough to start, it took just 18 minutes and one of the first times he had to really exert himself for his hamstring injury to rear its head and force him off.

Anthony Martial was approaching full fitness for the weekend, but wasn’t quite close enough to 100 percent to be included on the bench. Solskjaer might be thinking twice about what role he’ll play against Crystal Palace on Wednesday.

Rotation within games as well as between them will be key. With the top four race as tight as it is, there are no easy games in this stretch, and any dropped point could make a big difference.

After last night’s victory over Palace comes Southampton, and then an extremely tough week in Paris Saint-Germain and Arsenal away trips next Wednesday and Sunday.

By then, hopefully some on the injury list will be starting to return, otherwise starting line-ups could get very piecemeal.

For a short time on Sunday, United had five academy players on the pitch (Rashford, Pogba, Lingard, Andreas Pereira and Scott McTominay). Given that two of these five then got injured, Solskjaer’s unlikely to be able to field that many at the same time, but it could get close.

Pereira and McTominay performed admirably well having been thrown in at the deep end. Their defensive efforts limited Liverpool to just seven shots and only a single one on target. 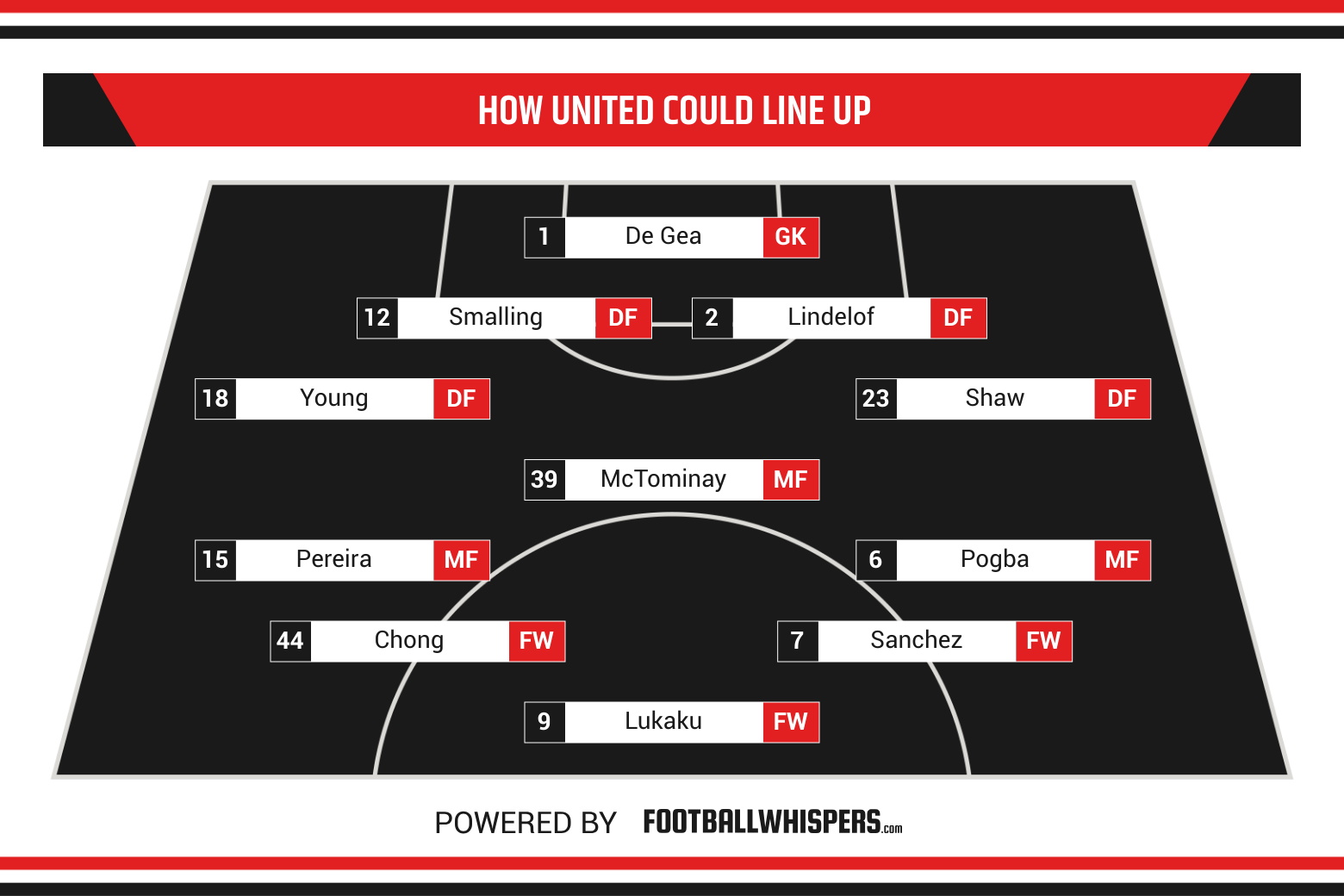 Tahith Chong could feature if Martial needs more time on the sidelines. The 19-year-old impressed in the half-hour he was given against Reading in the FA Cup earlier in the season on the right-side of attack. Lingard and Mata are usually the two sharing that position for United, and with both of them absent, Chong could step into the hole.

Young more important than ever

Whoever fills the spaces left by the injured absentees, one player on the pitch will see his importance rise: Ashley Young. As the captain and most experienced player on the pitch, his level-headedness and communication are invaluable.

With so much turnover in the starting line-up, it might take a while in matches for the team to gel, as they get used to the runs and movements of each other. Young is one of the best communicators in the squad, and could be seen discussing tactics with Pereira after he came on.

Whether it’s helping to guide young midfielders through the game or get acquainted with whoever fills in on the right-side of the attack, the 34-year-old will be more important than ever, and could be a key difference in how well United are able to cope.

Getting through this stretch is going to be a challenge that will require everyone to step up and, let’s be honest, steer clear of bad luck too. United have managed to do that for most of Solskjaer’s reign, they just need it to last for a couple of weeks longer.