Neither us nor Chelsea arrive in good form ahead of this crucial clash, with the early success under Ole Gunnar Solskjaer giving way to a run of seven defeats from nine matches, while Chelsea laboured to a draw hosting Burnley last time out and have endured some horrendous results on their travels.

Indeed, excluding the teams they’ve faced in the Europa League – where they’ve avoided any of the big hitters – the Blues have now lost six of their last eight trips as the exceptions came over Cardiff and Fulham.

Given the six defeats saw Maurizio Sarri’s outfit go down by a combined score of 19-0, that has to offer encouragement, especially as five of our recent seven defeats came away from Old Trafford.

Solskjaer opted for a back five against City to negate their attacking threat, just as he did in the first leg of our quarter-final encounter with Barcelona in Europe.

That’s understandable given the menacing assets going forwards that those two sides possess, but with a win a real necessity at this stage, he’ll certainly return to a more usual back four hosting poor travellers Chelsea.

The key battles will ultimately be between Eden Hazard and whoever starts at right-back (most likely Ashley Young), while in the middle, there’ll be instructions to hound Jorginho whenever he’s receiving the ball. With that in mind, the scurrying qualities of Jesse Lingard should be made use of here. 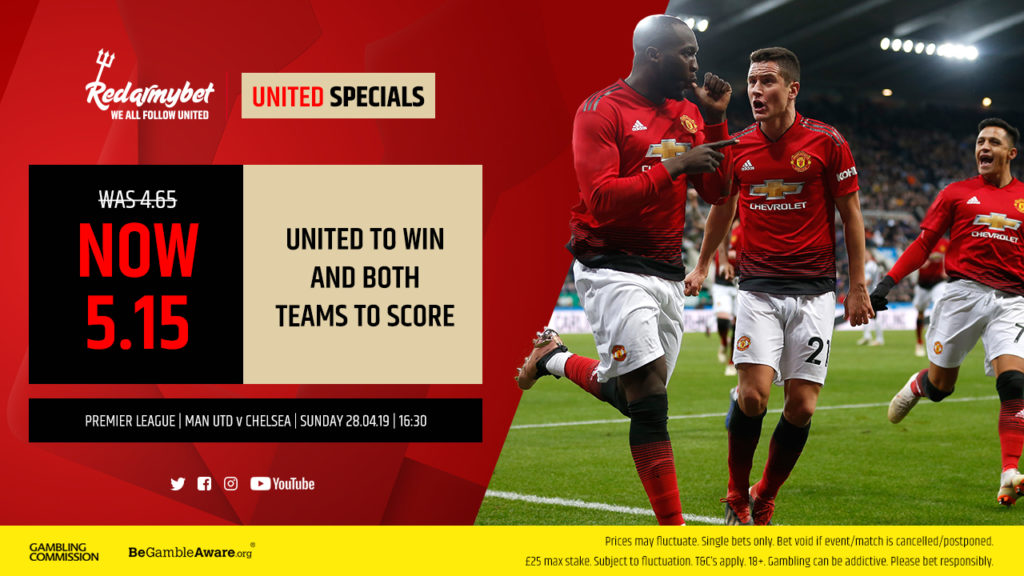 We had expected Ander Herrera to feature against City but he’ll surely return to the squad for this one, though he may well have to settle for a place on the bench. However, other than late fitness checks for Phil Jones and Eric Bailly, Solskjaer has a full complement to select from.

Chris Smalling would probably have been the one to partner Victor Lindelof at the back anyway, at least until we can open the chequebook in the summer, while decisions over personnel further up the field will probably have more to do with which players the boss reckons he can rely upon to show some fight for the shirt.

Meanwhile, the team news isn’t quite so good for Chelsea, with Callum Hudson-Odoi suffering a long-term injury and key centre-back Antonio Rudiger still a doubt with a knee complaint.

Marcus Rashford to score & United to beat Chelsea at 5.00*

Chelsea haven’t triumphed in their last five visits to Old Trafford, losing in each of the past two seasons, while Solskjaer has already masterminded a win over them in the early part of his tenure. The Blues’ away form is so dire that we can’t see them taking the three points, but our own efforts recently hardly leave us certain that this will end in victory either.

However, there’s no point in settling for a draw when that result would all but ensure we’re down in the Europa League next term, which should see us set out a little more positively than Sarri’s side.

That could make all the difference, as we’ve consistently looked better when taking a more adventurous approach that the crowd can get behind.