The Frenchman has stepped up in the last couple of games...

“I can tell you that the 97 minutes of the game was so good that you have to focus on that,” Jose Mourinho said when asked about the rampageous denouement to Manchester United’s 2-2 draw at Chelsea on Saturday.

Mourinho is right. Mistakes were made during those heated scenes but apologies were offered – and accepted. It is wiser instead to focus on the gripping football match that unfolded in cinematic fashion on a sun-soaked Stamford Bridge.

Which is what our friends at Football Whispers have decided to do as they shine the spotlight on Anthony Martial, whose two-goal performance against Chelsea has surely nailed his place in Mourinho’s starting line-up.

Although two points were snatched away from United right at the death, it was another important step in the right direction for Martial. The 22-year-old Frenchman has flattered to deceive for most of his United career. Signed for an eye-watering fee from Monaco, he lit up even the dullest moments of Louis van Gaal’s final year at Old Trafford but has, for the most part, failed to meet expectations.

Back Martial to score from outside the box vs Juventus at 21.00 with RedArmyBet*

But this year has served as a wake-up call for the forward. Excluded from France’s World Cup squad, he watched on as Kylian Mbappe, his successor at Monaco, set the tournament alight, propelling Les Bleus to victory in Russia.

Many were quick to note his and Mbappe’s contrasting trajectories. Since 2016, Mbappe has guided Monaco to the Ligue 1 title, moved to Paris Saint-Germain and replicated that feat, won the 2017 Golden Boy award (awarded to Martial in 2015) before clinching the World Cup, being named the ‘Best Young Player’ at the tournament to boot.

During that time, Martial has risked becoming part of the furniture at Old Trafford. His return of 11 goals in 45 appearances last season was far from disgraceful, especially when you consider that many of those appearances came off the bench, but Mourinho’s unwillingness to start him in the biggest games (he was an unused substitute for the win at Manchester City and the FA Cup semi-final victory over Tottenham) seemed well-placed.

On too many occasions, Martial offered flickers of his undoubted talent without ever stringing together a consistent run of form.

This season, however, he is showing signs of wanting to rewrite the narrative. The Frenchman has capitalised on Alexis Sanchez dropping out of the side. The Chilean, signed from Arsenal in January, has been out of sorts this season and was dropped by Mourinho after ineffective displays in the defeat at West Ham and the stalemate against Valencia. 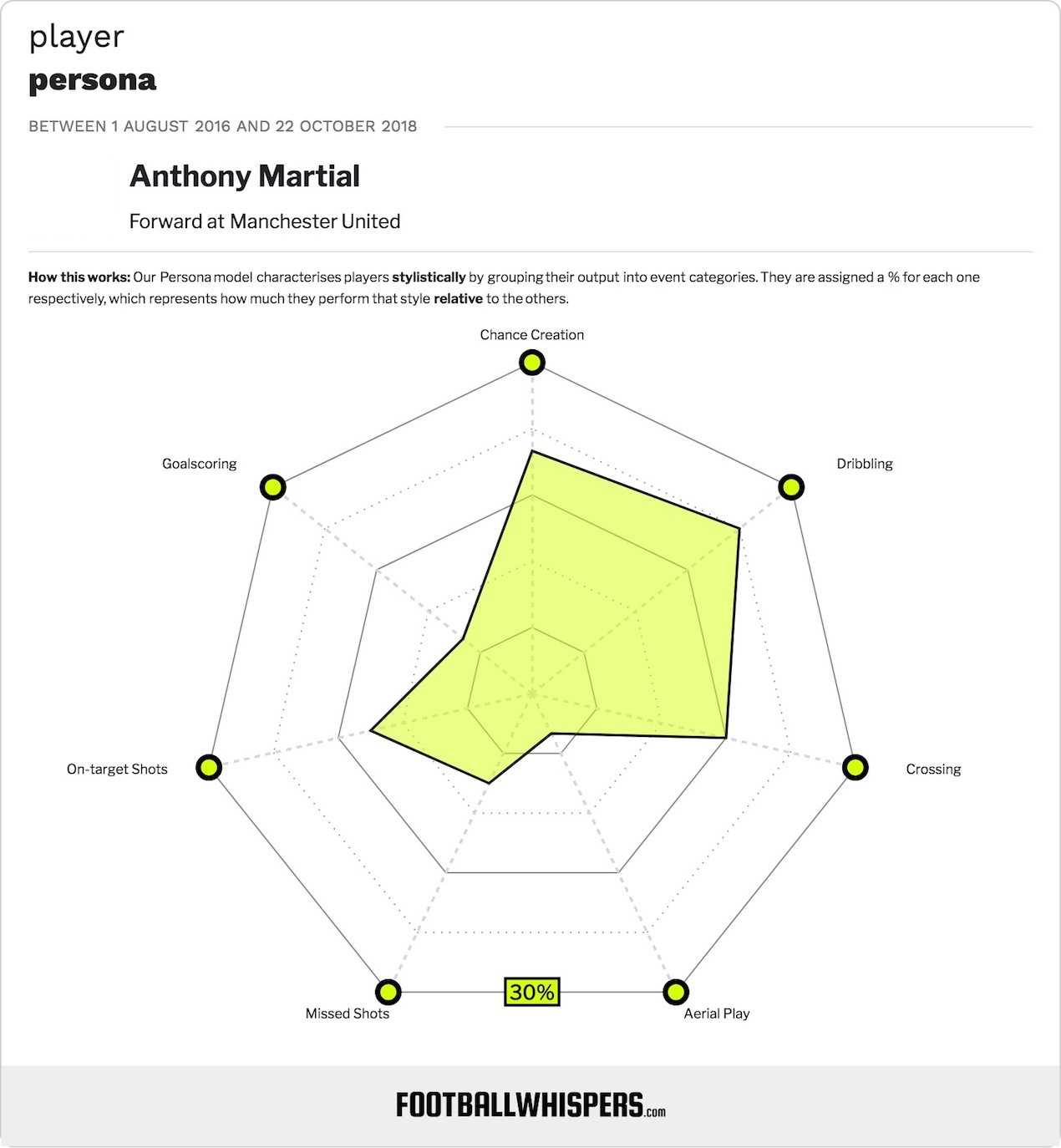 With a spot in the line-up there for the taking, Martial has risen to the challenge. A beautifully taken equaliser against Newcastle was huge for his confidence. Exchanging swift passes with Paul Pogba, Martial curled a superb effort into the far corner.

Chelsea, unbeaten under Maurizio Sarri, were always going to be a sterner examination and Martial was one of several United players who struggled in the first half. What came after the interval, however, is what will satisfy Mourinho the most. So often questions have been asked of Martial’s attitude. When the going gets tough, he can often disappear.

But not at Stamford Bridge. Having struck the equaliser with an instinctive volley, Martial swept a brilliant second beyond Kepa Arrizabalaga to nudge United ahead.

Martial has had better games for United but never have his match-changing interventions been so crucial in the context of his own career. Speculation over both his future and relationship with Mourinho has been rife. Martial admirably brushed away any suggestion of ‘tension’ with the manager on Saturday but there is no doubt he will have been aggrieved at falling behind Sanchez in the pecking order.

Back United to come from behind to beat Juventus at 13.00 with RedArmyBet*

But the last few weeks have seen a significant shift. Mourinho has lost patience with Sanchez and, while Romelu Lukaku has lost his scoring touch, Martial has stepped up to the plate in a big way.

His ruthless edge in front of goal over the last two games has effectively sealed his spot in the line-up for the time being. That offers a chance both to grab the headlines when Juventus come to town on Tuesday night and, more importantly, become a key figure in any prospective United resurgence in the coming weeks and months.

This season felt big for some of United’s most high-profile figures: Pogba, Mourinho, Sanchez etc. We’re yet to see Sanchez explode into life, but at least Martial is hinting that he’s finally ready to deliver on a regular basis and fulfill his immense potential.