Redmond's had a false start under Hasenhuttl...

Having won 14 of their 19 Premier League home games against Southampton, Manchester United like to welcome the Saints to Old Trafford.

The midweek round of matches saw Southampton escape the relegation zone for the first time in a couple of weeks, but they’re by no means out of danger. They’re just two points above the drop zone and, bar one week in January, the Saints haven’t been higher than 16th since September.

Ralph Hasenhuttl might be relatively new to the Premier League, but he knows it well enough to be aware of United’s history at Old Trafford.

“We spoke about the time of Alex Ferguson where nobody wanted to go there because there was nothing for you,” he said in his pre-match press conference.

“In the years after [Sir Alex retired] this myth is not as strong because other teams could take points there. They are going back to the old ways where it is hard to take points from them.”

Of course, his reign at Southampton is longer than Solskjaer’s at United, by a week or so. Both have experienced a degree of success in their short time at their current club, although those degrees differ a little.

Hasenhuttl has certainly done a good job, increasing Southampton’s points per game haul from 0.6 to 1.38 (an increase of 0.78 points per game). Solskjaer has managed to take United even further though, getting the Red Devils a boost of 1.11 points per game as he takes the average from 1.53 to an incredible 2.64 during his tenure.

Both clubs are having a better time under their new managers, but two players hoping that they can really kick on in this game will be Anthony Martial and Nathan Redmond. 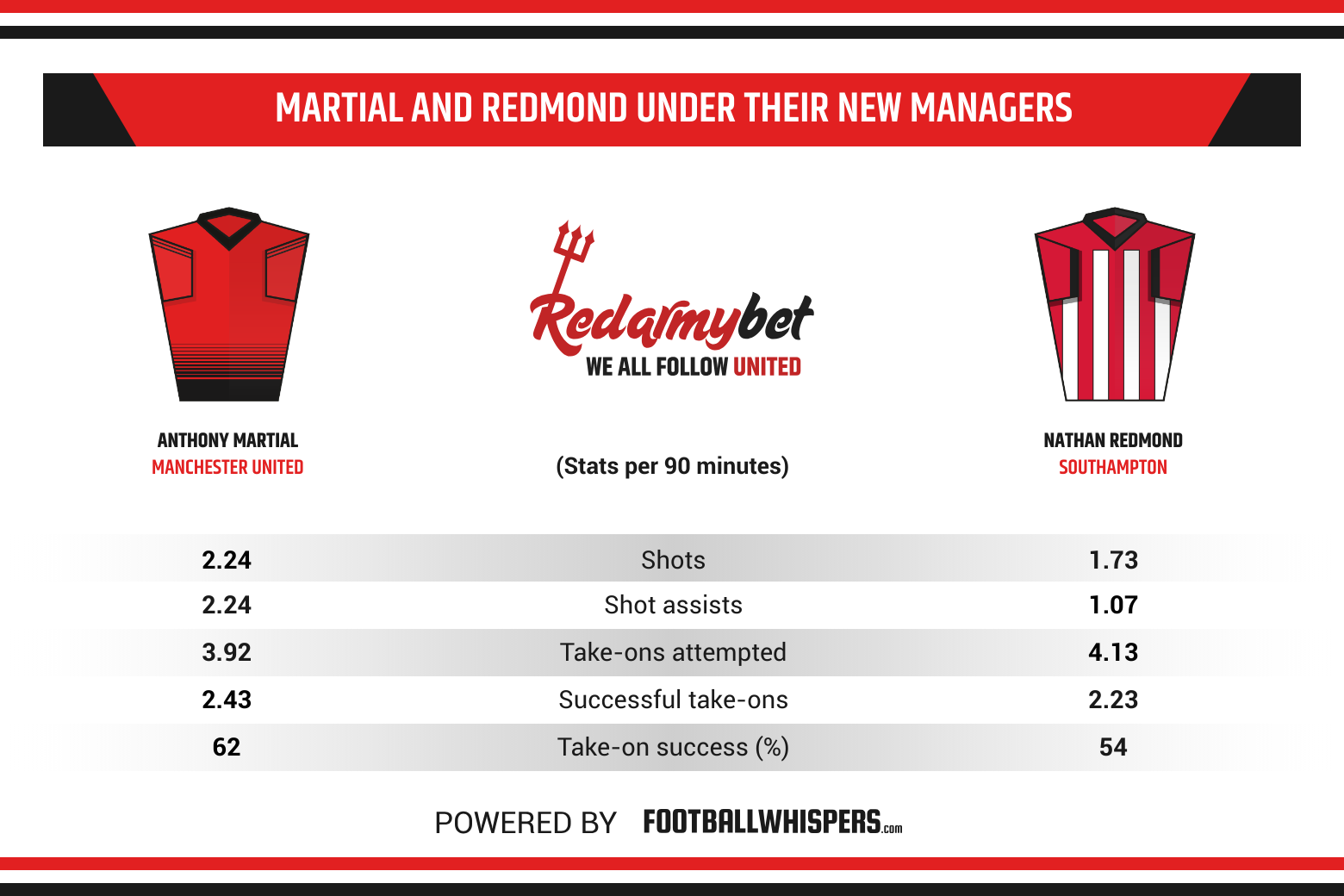 When Hasenhuttl first took over at Southampton, it looked like his counter-attacking style would be a big boost for Redmond. He got two goals and two assists in the space of three games in December, and it looked like the player and the tactics were a perfect fit.

However, since then he’s only scored once in the league, netting in a 1-1 draw against Burnley early in February. Since the start of 2019, he’s only had open-play shots worth 1.2 expected goals, so it’s not like he’s getting unlucky in front of goal, it’s just he’s not getting enough good chances.

This is a Southampton problem more than a Redmond problem, as the Englishman has the second-highest rate of expected goals in the squad this calendar year.

Martial has 1.3 expected goals from open play in 2019, despite having made three fewer league appearances than Redmond and 401 fewer minutes.

Injury and the good form of other members of the United squad have disrupted any run of form that the Frenchman could have built up, but even his irregular game time has yielded more threat in front of goal than Redmond’s regular starts.

Despite being a forward, Martial’s data suggests that he’s been in more of a creative role at United under Solskjaer than Redmond — who, for much of his career, has been a winger — under Hasenhuttl.

United’s Frenchman mas made the same number of shots as shot assists under Solskjaer, with the expected goals value of the shots he sets up actually higher than those of his own attempts.

Redmond, though, has become more of a selfish player under his new manager than he has been in the past. He’s been averaging 1.73 shots per 90 minutes and only 1.07 key passes.

They’re both keen dribblers too in their current roles, although it’s Martial who’s the most effective one. He attempts marginally fewer, averaging 3.92 per 90 minutes under Solskjaer to Redmond’s 4.13 under Hasenhuttl, but their success percentages are 62 per cent to 54 per cent.

The difference is that, while Martial is just one of a number of good attacking players that United have, while Redmond’s side rely on him a lot more. They may be similar players, but their position within their squad says a lot about where each team is.