We preview United's away fixture against Bournemouth.

Prior to the Everton game we talked about the form of Anthony Martial, backing him to find the net, and the French attacker did not disappoint.

He’s now scored more than any other player since making his debut with 41 goals, putting in a man of the match display as he won the penalty for the opener before curling a beautiful finish into the corner to seal the points.

His confidence appears to have returned after his career took a dip following the misguided arrival of Alexis Sanchez, pushing him out of the first team picture initially, but his latest contribution means that he and Paul Pogba are now joint-highest scorers this term ahead of Romelu Lukaku.

Pogba and Martial worked well together in United’s victory over Everton.

The burly Belgian was rightly dropped to the bench after going eight games without a goal, while he did himself few favours as he missed a free header after replacing Marcus Rashford with just over 25 minutes to go.

Rashford appears another low on confidence and needs to contribute more, especially when handed a rare start from a central position.

That leaves Martial as the clear danger man going forwards, while his prospects of scoring are boosted by his relationship with fellow countryman Pogba.

They appear to have a telepathic understanding, with Pogba assisting 60% of Martial’s successful attempts this term.

It’s taken some time, but Victor Lindelof is finally looking like a proper United player, though the Swede is only 24 years old which is still quite young for a defender and has his best years ahead of him.

He’d hardly be the first to take a while to adapt to the rigours of the Premier League (think about what a player Nemanja Vidic turned out to be) but his last two performances have been exemplary.

He was arguably our best player hosting Juve in the Champions League with a number of last-ditch tackles to limit the scoreline, while he kept Richarlison fairly quiet against the Toffees.

A clean sheet against high-scoring Bournemouth will be tough, however with Chris Smalling alongside him, though at least it offers some signs of encouragement at the back.

Smalling may be better than Jones, but he’s by no means a suitable long term partner for Lindelof at the heart of the defence, while Eric Bailly has lost his confidence and appears a shadow of the player that offered some promise in his early United career. 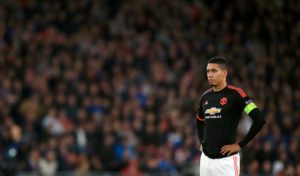 Smalling could feature alongside Lindelof this weekend.

After being ignored from the bench against Juve as Jose Mourinho elected to keep things as they were, Fred came back into the side against Everton and was industrious alongside Nemanja Matic and Paul Pogba.

There were no rash tackles this time as he used his energy to good effect, and will be important in trying to prevent Bournemouth playing between the lines.

Mourinho’s best teams have featured plenty of power and physicality from the middle of the park, with the Brazilian likely to be afforded more opportunities in future. 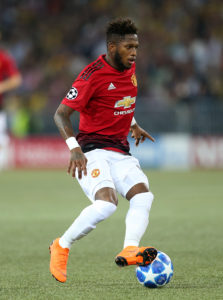 Manchester United’s Fred made a great impact against Everton.