While we’d like the thrilling comeback versus Newcastle to mark the start of a new beginning, as a momentous occasion where Jose Mourinho finally saw the light and sought to dominate games in the manner the fans crave, anyone who thinks those final 20 minutes is the new norm at Old Trafford is likely to be left disappointed.

Mourinho may have reminded us why he’s enjoyed such stellar success during his career with a clever tactical switch to move Pogba into a deeper role, but whether or not the relationship (or lack thereof) between the French World Cup winner and the Portuguese coach has been overstated, it will require more than just that subtle change to turn our fortunes around.

How will Pogba fare this weekend?

Away at Burnley, Mourinho was spooked at the height of our opponents and felt that it merited the inclusion of Marouane Fellaini.

Meanwhile, a combination of West Ham’s (not so frightening) attack and playing politics with the board pushed him into fielding a three-man backline with two defensive shields for protection – though neither Fellaini nor Nemanja Matic embody creativity.

Only five teams have netted fewer goals than the Hammers this term, but though the use of Scot McTominay at centre-back was primarily a pot-shot upstairs over the lack of suitable summer arrivals, Mourinho has a history of tailoring specific plans to counter the threat of other sides. 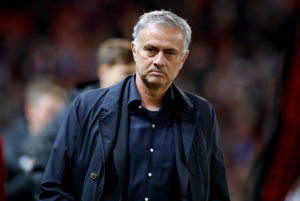 Will Mourinho get another win on Saturday?

It would come as little surprise if he has a something up his sleeve prepared in store for Eden Hazard.

That’s especially the case having utilized Phil Jones and Ander Herrera to combat the Belgian star in past encounters, but the Spaniard was made to suffer in the FA Cup final last year and does anyone really expect the lumbering Jones to contain the Premier League’s current best player?

Mourinho will also be seeking to curtail the influence of Jorginho, whose 180 passes at West Ham recently set a new Premier League record, as failure to close him down will inevitably result in Hazard receiving a greater supply of the ball.

Only Cardiff, Huddersfield and Fulham have shipped more goals than us this term to date, though five of the 14 we’ve conceded came in our last two matches and Mourinho will want to throw a tactical straight jacket over proceedings and bring some solidity to the backline.

It will however come at a cost to any pretence of attacking ambition, but that’s nothing new as we’ve only netted in three of 10 road trips to ‘Big Six’ sides since Mourinho arrived into Manchester.

Maurizio Sarri lost his first competitive game in charge as his team were outclassed by Manchester City in the Community Shield, but comparisons between the red and blue halves of Manchester are not particularly helpful at present given the disparity in our respective situations.

Likewise, a 3-2 defeat of an Arsenal side still finding their feet under Unai Emery should have little bearing on this encounter.

However, Chelsea have since faced Liverpool twice within the past month, following a 2-1 win at Anfield with a 1-1 draw at the Bridge.

With that in mind they appear more than capable of handling a restricted and stifled attack that simply doesn’t compare to Liverpool’s forward threat.

Given we’ve lost eight of our last nine clashes with the Blues beyond the confines of Old Trafford, a run that stretches back to October 2012, we will be watching this one in trepidation.

However, given Mourinho’s stubbornness, the boys have a chance of getting to the interval with no harm done.

Do United really need another superstar signing this summer?