We preview Newcastle's trip to Old Trafford to face the Reds.

The atmosphere at Old Trafford becomes more toxic by the day and it’s clear Jose Mourinho has lost the dressing room, with even club captain Antonio Valencia liking an Instagram post describing the style of play as a ‘punishment’ to watch and calling for the managers’ head.

Contradicting the ‘Special One’ has already seen Paul Pogba permanently excluded from the armband, and the only solace to be taken from the breakdown in relationships is Jose’s inevitable departure before Christmas so we can get back on track.

At least the compensation that will be required to make the switch will be better spent than the dosh wasted on Alexis Sanchez’s wages and over £60 million quid’s worth of centre-backs!

Will Sanchez ever make his presence known at United?

For the latest odds on the fixture, click here

Indeed, following some withering criticism by legends Paul Scholes and Rio Ferdinand, this feels like a last chance saloon for the Portuguese coach.

The team were booed off after their latest wretched display and it’s hard to question why, with no signs on the horizon that the situation is anything but beyond repair.

While it’s feasible to suggest an attacking performance full of vim and vigour could stave off the inevitable a tad longer, Mourinho isn’t going to give a free reign to creative individuals like Pogba or Sanchez after both have been guilty of giving away the ball too cheaply.

Nemanja Matic and Marouane Fellaini resemble trusted but outdated generals, ready for the battle but with little incision.

That appears a potent metaphor for Mourinho’s recent career, and a failure to beat a Newcastle side down at the bottom with Huddersfield and Cardiff would be another damning indictment of current management.

One can imagine a wry smile forming on Rafa Benitez’s lips as his old Valencia side delivered a steely and resolute performance to keep our attack at bay. 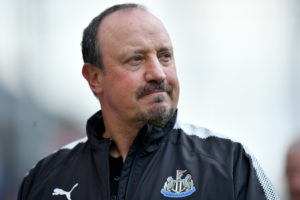 ‘Attack’ is perhaps a generous depiction, with our first serious attempt on goal against Valencia coming after 70 minutes, while even Marcus Rashford (our brightest player on the day) appears to have lost his sparkle even if the intent to be positive occasionally flickers.

We’d like to be optimistic about turning the corner against Newcastle and it would certainly be satisfying to see the former Liverpool manger put in his place, but realistically this should prove another dull affair.

Seven of the two coaches’ nine Premier League head-to-heads have finished with fewer than three goals, while the Magpies only have four different goalscorers with two-goal Joselu the only player to net more than once.

It will be a case of dig the trenches early and sit back for the visitors and with no coherent attacking strategy on our part, this game is set to go ‘unders’.