Talk of a crisis bloomed following back-to back defeats versus Brighton and Spurs, as United’s defence in particular came under close scrutiny after shipping three goals in both of those games.

However, the Red Devils are back in business with three consecutive victories since then and having conceded just the solitary strike in that time, appear much more like a Jose Mourinho outfit than at any other point this term.

Further, Diogo Dalot thoroughly impressed on his debut at right-back and though veteran Antonio Valencia should return to the starting XI here, there appears to be more depth at the back now following a mature performance from the 19-year-old.

For the latest odds on United’s fixture with Wolves, click here

Pogba puts in another ‘monster’ performance

The relationship between the French World Cup winner and his coach has long been questioned, but after forming a key cog in that summer triumph with the national side, the hope was that Paul Pogba could kick on and start to dominate the midfield on a regular basis in a United shirt.

Pogba scored twice and set up the third against the Swiss champions and the player even thanked his manager and teammates for allowing him to continue with spot kick duties after missing one at Burnley earlier this month.

However, it wasn’t just the end product but the all-round display that will have pleased Mourinho, as he showcased the full range of flicks and passes rather than constantly take refuge in safer or square options.

He still managed a 93% passing accuracy and even recovered the ball 11 times, a deeply encouraging aspect given some have questioned his desire to put in a proper shift at United. There were even signs of an understanding between himself and summer signing Fred, with the Brazilian likely to keep his place as Ander Herrera remains out injured while Nemanja Matic is suspended.

Pogba to score anytime this weekend at 3.30* 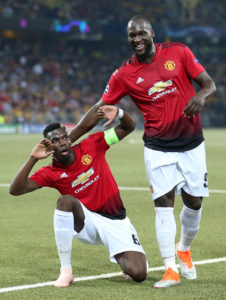 Mourinho once went 151 games without suffering defeat on home turf across his time with Porto, Chelsea, Inter and Real Madrid – a spell that stretched over nine years.

As such, it shouldn’t be too much of a shock to see his United side hold a strong home record, going W12-D2-L1 at Old Trafford since the start of last season when excluding ‘big six’ opponents.

They kept a clean sheet in 10 of those victories and though Wolves were banging the goals in during their Championship-winning season, they’ve been less regular now in the top flight.

They’ve only netted more than once on a single occasion this term and that came on the opening day against Everton, who saw Phil Jagielka sent off during the first half. With that in mind, a home win to nil appears on the cards.

REDARMYBET IS THE ONLY BOOKMAKER COMMITTED TO SHARING 50% OF NET PROFITS WITH UNITED FANS.